Statement by Azerbaijani Community of Nagorno-Karabakh circulated as UN document 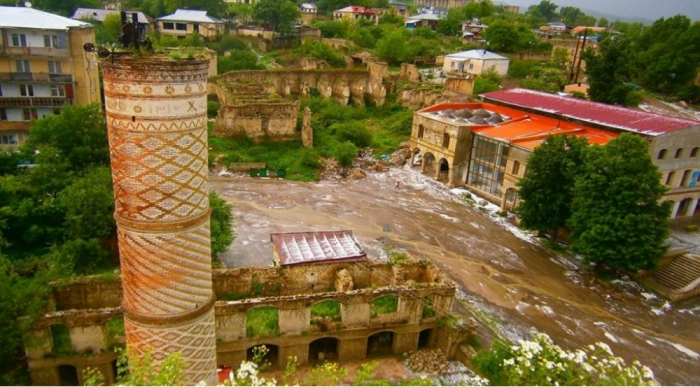 The statement by the Azerbaijani Community of the Nagorno-Karabakh region of Azerbaijan regarding the ongoing Armenian military aggression was circulated as a document of the UN General Assembly and Security Council, the Community told AzVision.az.

The document reads as follows:

“We, the internally displaced persons from the Nagorno-Karabakh region and other occupied districts of the Republic of Azerbaijan, have suffered from Armenian aggression for almost 30 years.

The ethnic cleansing policy against us, which started in 1988, culminated by Armenian military invasion, occupation of almost one fifth of the territory of Azerbaijan and expulsion of more than 700,000 Azerbaijanis from their ancestral homelands.

During the aggression and occupation of our territories, thousand of Azerbaijanis were brutally killed, while many civilians went missing. The genocide perpetrated in the Azerbaijani-populated Khojaly city of the Nagorno-Karabakh region of Azerbaijan, where in one night 613 civilians, including women, children and elderly were brutally killed, has become the largest massacre committed against Azerbaijanis by invading Armenian forces. Unfortunately, the perpetrators of these crimes continue to enjoy impunity.

The world community, including the UN Security Council and General Assembly, has repeatedly stated its unambiguous support for the sovereignty and territorial integrity of the Republic of Azerbaijan within its internationally recognized borders, with the Nagorno-Karabakh region as its inalienable part, and has affirmed the right of return of all internally displaced Azerbaijanis to their lands.

However, it is very hard to prepare to peace and reconciliation against the background of overt annexationist policy pursued by Armenia and bellicose rhetoric of its leadership, manifested in infamous statement by Armenian Prime Minister Nikol Pashinyan that ”Karabakh is Armenia.” Moreover, Armenia refuses even to accept the existence of the Azerbaijani Community of the Nagorno-Karabakh region of Azerbaijan, denies our fundamental rights and freedoms and tries to oppose by all means contacts between the Azerbaijani and Armenian communities of the Nagorno-Karabakh region of Azerbaijan. This is yet further proof of profound contempt for human rights, which is at the core of Armenia’s policy of aggression and occupation of the territories of Azerbaijan.

Armenia tries to prevent the Azerbaijanis from returning to their homes and to colonize the occupied territories and this is evidence in its deliberate policy and practice aimed at changing the demographic composition as well as economic, social and cultural character of these territories.

We call upon the world community not to turn a blind eye to the ongoing Armenian aggression and sufferings of hundreds of thousands of Azerbaijanis uprooted from their homes for 30 years and re-double the efforts towards ensuring the implementation of the UN Security Council resolutions and the settlement of the Armenia-Azerbaijan conflict on the basis of the norms and principles of international law, as enshrined in the Helsinki Final Act, in full respect for sovereignty and territorial integrity of Azerbaijan within its internationally recognized borders.”