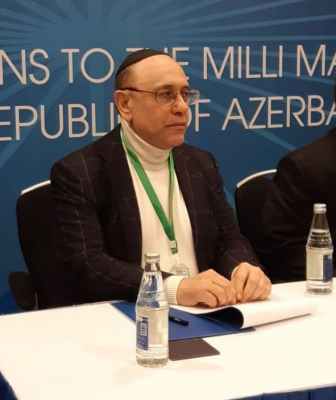 The observer of the mission of representatives of the US public from New York, Coordinator of the Congress of Bukharian Jews in the US and Canada Rafael Nektal told reporters about the impressions received in Azerbaijan at a press conference on the early parliamentary elections in the country.

Rafael Nektal said that when he met with the Jewish community in Azerbaijan, he saw the respect shown by a government to ethnic minorities.

"I was in Baku and Guba, and in both cities it was nice to see both a street and a monument to the national hero of Azerbaijan Albert Agarunov, who was of Jewish descent. I saw how the locals respect the community of mountain Jews in Krasnaya Sloboda, the community of Ashkenazi and Georgian Jews in Baku. I was shocked at how much the bridge of mutual assistance and mutual respect between Muslims and Jews was developed here," Rafael Nektal said.

Rafael Nektal also noted that in addition to the biography of Albert Agarunov, he was also acquainted with the January 20 events and others that shocked the society of Azerbaijan on the path to independence, and understands how consolidated here the society is, drawing parallels with the trials of the Jewish people.

Nektal added that the mission visited various cultural and religious sights of Azerbaijan and was pleased with their stay in the country.