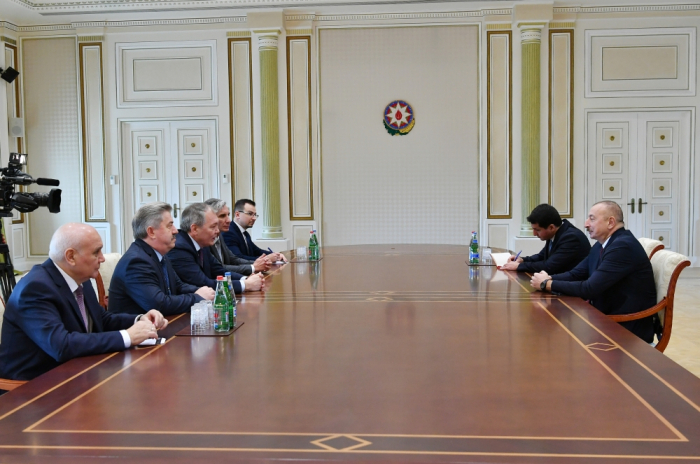 President of the Republic of Azerbaijan Ilham Aliyev has received a delegation led by head of the observation mission of the CIS Executive Committee, Chairman of the Committee on CIS Affairs, Eurasian Integration and Relations with Compatriots at the State Duma of the Russian Federation Leonid Kalashnikov.

- You are welcome! This time you are here with an observation mission. I am very glad that the State Duma is represented by such a large delegation. There are also many observers from the CIS. In general, there are more than 800 foreign observers this year observe and a large number of international representatives. I am sure they have had all the opportunities to follow both the process and the voting day. Thank you again for visiting us and participating in this process.

The head of the observation mission of the CIS Executive Committee Leonid Kalashnikov said:

- Thank you very much, Ilham Heydarovich. We appreciate the fact that you have found time to meet with us and are pleased to share our impressions with you too. My associates and I visited more than a dozen polling stations yesterday. We see that the elections were competitive, open and democratic. We met with the chairman of the Central Election Commission and yesterday adopted a statement of the CIS, a large mission which includes several countries, the Executive Committee and the Inter-Parliamentary Assembly. In our opinion, everything was fair, open and democratic. I understand perfectly well that there are many other international organizations here. We met with them too.

I have just returned from PACE, where you are often remembered. We will continue our work in international parliamentary organizations and, for sure, you have something to be proud of there. This morning I saw the opinions of some international observers. Objectively, everyone says that the elections have been very successful.

President Ilham Aliyev: Thank you. Thank you for coming and taking part in this important process. This, of course, is a continuation of the reforms we announced after the presidential election in 2018 and are implementing in a consistent manner. Everything goes within the framework of the overall development strategy of Azerbaijan, which is aimed at ensuring the sustainable development and development of democratic processes. Therefore, the structural reforms that have been carried out, including personnel reforms, have one goal – to ensure that we do not stand still because we can’t rest on our laurels.

There have been significant achievements in the past years. But life dictates its own conditions. The situation in the world, in our region, in the economic sphere is changing and new challenges are emerging. Therefore, we must be prepared for them and should not miss the time. Therefore, the renewal of the government, the renewal of the Presidential Administration, the renewal of central authorities, local authorities and personnel reforms could not but affect the parliament. In fact, by bringing the elections several months closer, we actually saved time because the parliament is on vacation in the summer and there would have been elections as soon as the vacation was over.

We tried to conduct the most open elections and therefore invited observers, including those we honestly do not expect an objective assessment from. Based on our previous electoral experience in Azerbaijan, we always saw a biased attitude. Nevertheless, we believe that we have nothing to hide. We invited a large number of observers and are grateful to everyone who has arrived. Therefore, whatever they ultimately say and no matter how they are forced to say things, each of them will still have an opinion about the country, about the people and about the election process. Therefore, it is very valuable for us that this delegation of the State Duma is involved in this process. Of course, there is a delegation of the CIS and other international organizations. Therefore, I think that the main thing is to ensure that the people of Azerbaijan are satisfied with the results because the most important thing for us was to make sure that people can choose those they vote for and trust. This level of trust is very high.

In general, the level of public confidence in the elections is manifested in the fact that there were more than 1,300 candidates. And this is an unprecedented number. If they did not believe in these elections, they would not have submitted their candidacies and spent so much time. And I was informed yesterday and today that the process was generally calm and there were no unforeseen situations. Therefore, some people win, others lose. Everyone should come to terms with the realities. The realities are such that conditions have been created and there was maximum openness. Azerbaijani citizens have voted despite the harsh weather, which was rather unexpected too. I think the turnout is also good. Although this is not the main thing. The main thing is that those elected by the people should feel responsible and know that if they want to be elected again, they should work in their constituencies. This is something the previous parliament wasn’t particularly good at. This is why many of the former members of parliament did not participate this time because there was no work in the districts. For the new parliament this will be one of the main tasks. Therefore, in order to ensure the sustainable development of the whole country, MPs should delve into the problems of the regions, open them and communicate them to the government and the public, thus helping to address them. Thank you again. Glad to see you!