The modern alchemists racing to create a new element 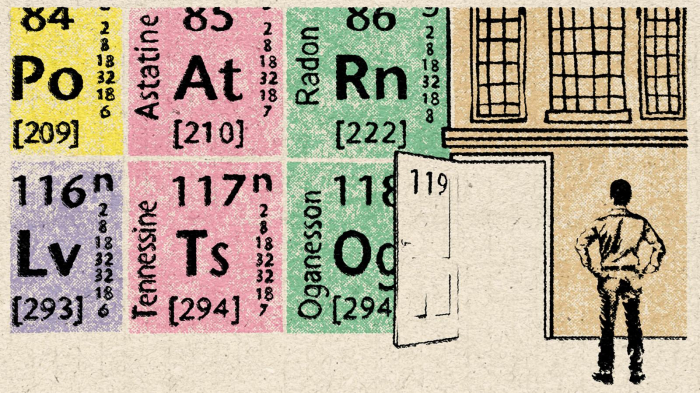 With the help of enormous atom smashers, scientists are hoping to start an eighth row of the periodic table and discover new atoms that have never been seen before.

For medieval alchemists, the quest to convert “base” metals - like lead - into “noble” gold was a tantalising but elusive goal that could help them understand their place in the cosmos. Many blended mysticism and magic in their pursuit of this transformation, hoping it would enable them to unlock the secrets to prolonging human life. At first glance it seems somewhat at odds with modern scientific enterprise.

But physicists today are engaged in their own form of alchemy – converting one element into another. They are doing what ancient alchemists could not – creating new atoms that are stretching the realms of what is known to be possible and shedding new light on how matter in our universe behaves.

One such person is Kosuke Morita, a nuclear physicist at Japan’s Kyushu University and the leader of the first Asian team to synthesise a new element on the periodic table, the superheavy element 113. 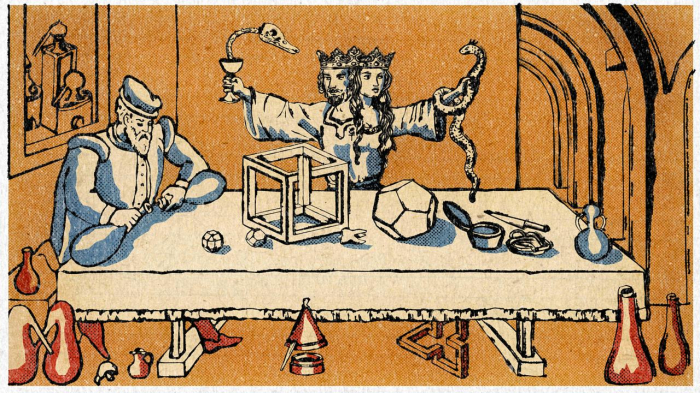 Medieval alchemists strove in vain to turn elements like lead into but modern atomic science is now engaged in a new form of alchemy (Credit: Emmanuel Lafont)

But rather than trying to coax worthless metal to metamorphise into a precious one with mythical objects like the philosopher’s stone, modern scientists take a much more dramatic approach – smashing two atoms together to make a bigger one.

Already 118 elements are now known on the periodic table. The race is on to find number 119.

There are no naturally occurring elements on Earth with more than 92 protons in the nucleus of their atoms – a feature denoted by the atomic number in the periodic table. It is possible, however, to synthesise atoms with more in the laboratory.

In practice, it is technically difficult to synthesise superheavy elements with atomic numbers greater than 103. When two atoms collide, the positively charged protons in their nuclei cause an electrostatic repulsion between them. To prevent the nuclei from simply bouncing apart, scientists have to smash them together at extremely high speeds. Usually this involves using one element as a target and bombarding it with an intense beam of ions from a second element travelling at thousands of miles per second.

The biggest difficulty in synthesising a new superheavy element is that a nucleus is minute, just one trillionth of a centimetre across. And there’s only a one in 100 trillion chance of fusion even if the two nuclei collide.

Assuming one gets a direct hit and the two atomic nuclei fuse together, getting it to hang around for long enough to detect is a fresh challenge. The isotopes of 113 – variants of an atom that differ in atomic weight due to the number of neutrons they have in their nucleus – appeared for a fleeting thousandth of a second at the RIKEN Nishina Center for Accelerator-Based Science in Wakō, Japan.

And while Morita is avowedly a man of science, that hasn’t stopped him from holding on to a few superstitions that perhaps reflect the parallels his work has with more ancient forms of alchemy. While attempting to prove the existence of element 113, he made a habit of making an offering of precisely 113 yen each time he visited a Shinto shrine. 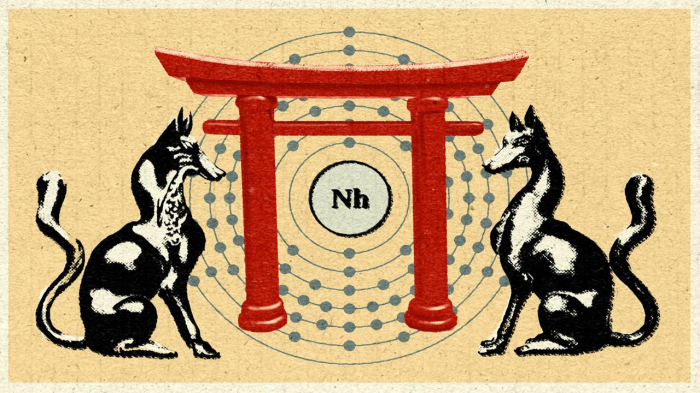 Kosuke Morita was not above a little superstition while trying to prove the existence of nihonium, making offerings at Shinto shrines of 113 yen (Credit: Emmanuel Lafont)

But the work of Morita and his colleagues was far from a spiritual or sorcerous affair.

“Element 113 was synthesised when we accelerated a beam of zinc nuclei and collided it into a bismuth target at 10% the speed of light,” says Morita. It took more than four trillion collisions over nine years to successfully make element 113 just three times. But it was enough to have it recognised as a new element.

Despite a temporary shutdown when Japan was hit by the 2011 Tohoku earthquake, one of the biggest to be recorded in a century, Morita’s team made a crucial observation on 12 August 2012 that put earlier doubts about the existence of element 113 to rest.

“We can only be sure that we’ve discovered a new element when we watch it decay,” says Kaitlin Cook, a nuclear physicist at Michigan State University. “All of these elements are radioactive and emit alpha particles. Helpfully, the alpha decay energy is a ‘fingerprint’ of a particular nucleus that can be measured with detectors. If we make a new element, we will see some new decay, which hopefully produces an already known nucleus for which the ‘decay chain’ is already known.”

As they discovered the element, Morita’s group also earned the right to name it. After much deliberation, eventually settled on nihonium, with the symbol, Nh. Wako City named a street after the new element in recognition of the discovery.

“From the viewpoint of chemistry, it is very important since we are filling in one space in the periodic table, and there may be only 173 spaces there,” Morita explained in a RIKEN newsletter published around the time the discovery of Element 113 was made official. Scientists have calculated that it may only be possible for 172 or 173 elements to exist before the nuclei start falling apart, although some believe the Periodic Table could extend further still.

Several research groups are now hoping to be the first to synthesise element 119 and extend the periodic table (Credit: Emmanuel Lafont)

“So far, fewer than 120 have been discovered,” continues Morita. “It’s also important symbolically. All the elements before were discovered in the West, and it is wonderful that we now have an element discovered in Asia.”

Now Morita and his team are racing towards the discovery of another new element that will kick off the eighth row on the periodic table. Element 119, provisionally called ununennium, is still a hypothetical element that would be the seventh alkali metal with similar properties to the other volatile substances in this group, including lithium, sodium, potassium and caesium.

Synthesising it and then detecting it will be no easy task, though.

“Element 119 will require months of irradiation of a curium target with an intense vanadium beam,” says James Roberto, associate laboratory director for science and technology partnerships at Oak Ridge National Laboratory in Tennessee, US. Even then the amount of 119 that will be produced are likely to be tiny and incredibly short-lived. Ensuring the curium target can survive such long periods of bombardment in good enough condition to still be viable will also be a challenge.

And the Japanese team are facing intense competition from other groups around the world, including a team at the Joint Institute for Nuclear Research in Dubna, Russia, led by Yuri Oganessian, the physicist whose name is now carried by the heaviest element to be discovered so far, Oganesson, which he helped synthesise for the first time in 2002. The Russian team have a formidable track record, discovering the four heaviest known elements in the periodic table, 114-118.

Both teams are using the hot fusion reaction to find element 119, the same method Oganessian’s team used to discover elements 114 to 118, where extremely high temperatures are used to fuse nuclei together. The Russians plan on using a titanium beam to bombard a berkelium target, while the Japanese are using vanadium to bombard curium. 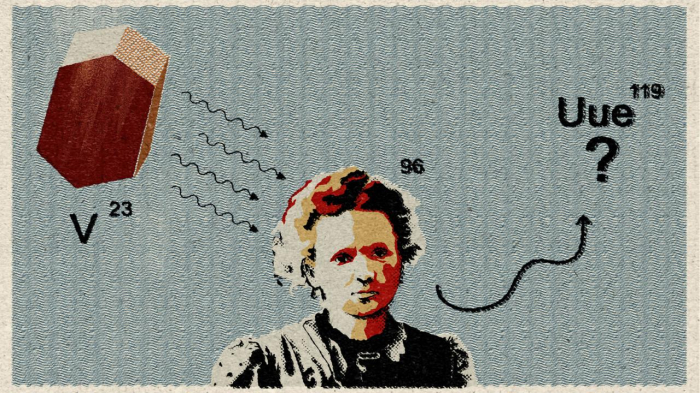 It will take months of irradiation of a curium target, named after Marie Curie and her husband, by an intense vanadium beam to make element 119 (Credit: Emmanuel Lafont)

“The production probability of the titanium-berkelium reaction is expected to be larger than the vanadium-curium one,” says Hiromitsu Haba, who is one of the team leaders of Morita’s Superheavy Element Research Group at RIKEN. “However, berkelium is a very rare target. It is difficult for us to get the material continuously, as the half-life of the berkelium isotope is less than one year. It will take us several years to complete our experiments, thus we prefer the long-lived curium target.”

Regardless of which targets the groups will use, both will get them from the nuclear reactor at Oak Ridge National Laboratory.

To improve their odds of finding element 119, Morita’s team plans to conduct experiments using two types of particle accelerator, starting with a cyclotron beam, which fires particles around an enclosed ring, while waiting for a linear accelerator to become operational. “The ring cyclotron we are currently using is very versatile and many other users at our institution also want to use it. With the new linear accelerator, this problem will be solved. And more importantly we will have a possibility to run two searches in parallel with using both accelerators,” says Hideto En’yo, director of the RIKEN Nishina Center for Accelerator-Based Science.

“The second experiment will start within the Japanese 2019 fiscal year, hopefully, when we complete our upgrade.” The team say they are on track to deliver the first beam in Februrary.

If they are successful, it could be the start of a new era of atomic science. Physicists believe that the eighth row of the periodic table is where a so-called “island of stability” may be found. This is where isotopes of superheavy elements are predicted to possess a “magic number” that make them remarkably stable, potentially half-lives hundreds of years long. This would offer the opportunity to find new uses for these long-lived elements, depending on their properties.

The potential practical applications of discovering a new element may not be obvious at first but could be hugely beneficial in the future. The discovery of gadolinium in 1880 and technetium in 1937, for example. These are both metals given to patients before scans such as Magnetic resonance imaging (MRI) and computed tomography (CT) to help tissue be imaged more easily.

If the new elements that Morita and his colleagues are pursuing prove to be useful in similar ways, they could achieve another goal of the alchemists of old. And one worth far more than mere gold.