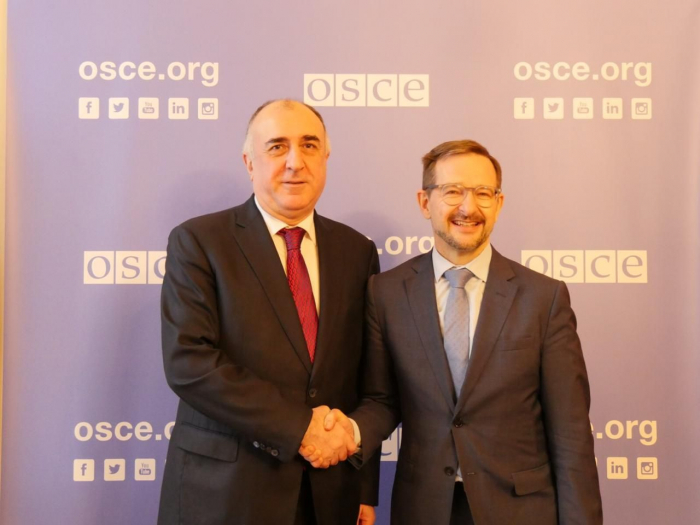 Secretary General Greminger said that the OSCE is committed to supporting Azerbaijan in the implementation of its commitments in all three fields of security: politico-military, economic and environmental, human. In this regard, the Secretary General said that the OSCE Office for Democratic Institutions and Human Rights (ODIHR) deployed an Election Observation Mission to Azerbaijan to observe early parliamentary elections on 9 February, following an official invitation from the authorities.

Mammadyarov stressed that these elections should be viewed in the context of the reform process in Azerbaijan.

Mammadyarov briefed Secretary General Greminger about his meeting with Armenian Foreign Minister Zohrab Mnatsakanyan, which took place under the auspices of the OSCE Minsk Group Co-Chairs on 28-30 January in Geneva. The minister emphasized the importance of such detailed discussions on the substantive aspects of early conflict resolution, on the basis of the Helsinki Final Act principles. Greminger expressed his full support to the efforts of the Minsk Group Co-Chairs and welcomed the talks and concrete steps to prepare the populations for peace through intensified people-to-people contacts.

Mammadyarov and Greminger also discussed the current phase of implementation of the OSCE project on “Promoting Green Ports and Connectivity in the Caspian Sea Region”. The project aims at supporting Azerbaijan, Kazakhstan, and Turkmenistan in making the best use of renewable energy, digitalization and trade, and transport facilitation to promote connectivity across the Caspian Sea and the wider region.

Elmar Mammadyarov invited Greminger to visit Azerbaijan in the near future. The minister announced that on the occasion of the Secretary General’s visit a conference on promoting green ports and connectivity will be organized in Baku.