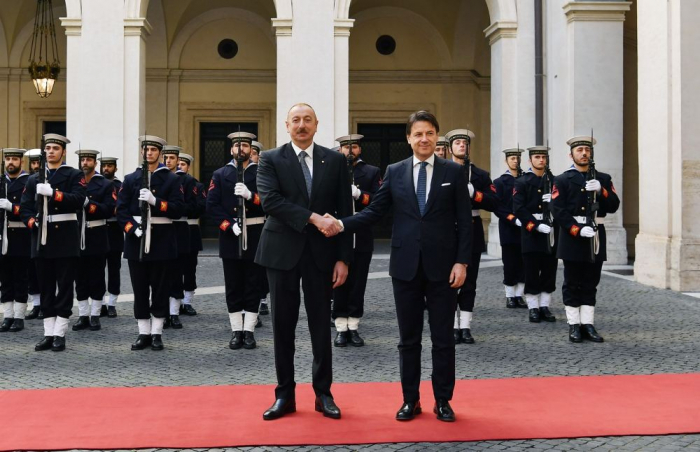 Prior to the meeting, a welcome ceremony was held for President Aliyev.

A guard of honor was lined up for the president of Azerbaijan.

President of the Council of Ministers of Italy Giuseppe Conte greeted President Aliyev.

The national anthems of Azerbaijan and Italy were played.

The chief of the guard of honor reported to the president of Azerbaijan.

President Aliyev and President of the Council of Ministers of Italy Giuseppe Conte reviewed the guard of honor.

Then President Aliyev and President of the Council of Ministers Giuseppe Conte posed together for photographs.

They noted that political relations between Azerbaijan and Italy were at a high level. The sides underlined that the two countries enjoy strong friendly ties. The importance of signing the “Joint Declaration on Strengthening Multidimensional Strategic Partnership” was stressed, adding that this document would raise the bilateral relations to a higher level. The leading role of Azerbaijan in fighting against radicalism, terrorism and extremism as well as the country`s secular traditions were hailed.

They pointed out that the two countries were successfully cooperating in the energy sphere, stressing that this year the TAP project, the last segment of the Southern Gas Corridor, entered its final phase. It was also noted that the Italian companies were actively involved in the development of the non-oil sector and diversification of the economy in Azerbaijan.

The sides emphasized that the numerous documents, which to be signed during this visit, would pave the way for further developing cooperation between the two countries. The sides said that the business forum, which to be held on February 21, would create greater opportunities.

Italy`s support for the development of Azerbaijan`s relations with the European Union and NATO was underlined at the meeting. The two countries` joint participation in the peacekeeping operations in Afghanistan was also mentioned.

The sides also discussed cooperation between Azerbaijan and Italy in the fields of science, education, student exchanges and tourism.

The role of the Heydar Aliyev Foundation in developing cultural relations between the two countries was emphasized. It was noted that Italy declared 2020 the Year of Azerbaijani Culture.

President Aliyev invited the president of the Council of Ministers of Italy to pay an official visit to Azerbaijan. Giuseppe Conte accepted the invitation.

The meeting then continued in an expanded format with the participation of delegations.