President Aliyev: Our main task is to diversify trade relations between Azerbaijan and Italy 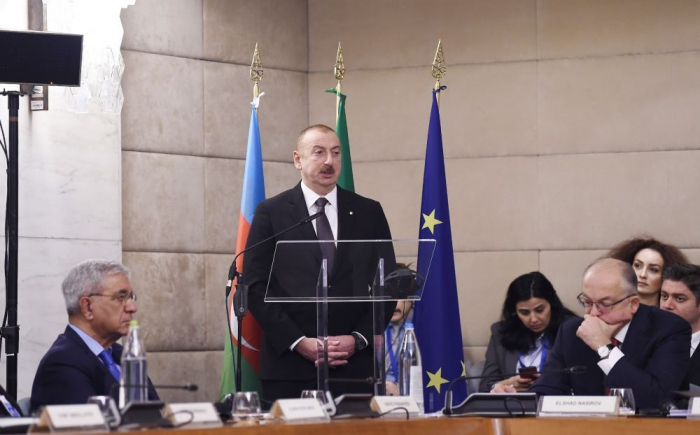 The main task is to diversify trade relations between Azerbaijan and Italy, Azerbaijani President Ilham Aliyev said. President Aliyev made the remark at the Azerbaijan-Italy business forum in Rome, AzVision.az reports.

“I am very pleased that an Italian-Azerbaijani business forum is being held as part of my state visit to Italy,” the president said. “I am sure that it will be very productive, and as a result of the forum, economic and trade relations between the two countries will rise to a new level. I am sure of that. There are many factors that give reason to say this.”

“As you know, today is the last day of my state visit to Italy,” President Aliyev added. “At the invitation of President Mattarella, I am paying a state visit to your beautiful country, and this is evidence that our relations are at a very high level. In 2018, President Mattarella paid an official visit to Azerbaijan. I can say that after that visit, a powerful impetus was given to the relations between the two states.”

“The signing of more than 25 documents yesterday and today is clear evidence of that,” the president said. “After all, the signing of so many documents is possible only between countries that are very close to each other.”

“These documents cover many areas,” President Aliyev said. “The documents covering the political, economic, cultural, humanitarian spheres, education, energy, space industry, military industry and other areas provide an excellent basis for our further cooperation. Among them, I want to specifically note the Joint Declaration on Strengthening Multidimensional Strategic Partnership. This is a very serious political document essentially defining the main priorities of our further bilateral cooperation.”

“The document contains very important points,” the president said. “They testify that our ties are close to being allied because one of the articles there states that we will support each other in international organizations taking into account our interests.”

“As for the economic sphere, as the Minister said, Italy is the first trading partner of Azerbaijan,” the president added. “But we also need to know that this became possible primarily due to the export of crude oil from Azerbaijan to Italy. Our main task is to diversify our trade relations. I believe that such opportunities will be created by the implementation of projects in the non-oil and gas sector.”

“Azerbaijan has been supplying Italy with crude oil for many years,” President Aliyev said. “Crude oil from Azerbaijan accounts for 18 percent of Italy’s consumption, and Azerbaijan is in first place. As a result of the successful completion of the TAP project, Azerbaijan and Italy will interact in the gas sector as very reliable partners over the next decades.”

“The TAP project is close to completion,” the president said. “It is 92 percent through. As you know, this is the fourth segment of the Southern Gas Corridor. To date, work in the remaining three segments has been completed. I am sure that at the end of this year we will celebrate the final commissioning of the project. Yesterday, during a meeting with the Chairman of the Council of Ministers, Mr. Conte, I invited him to a formal ceremony to be held in Azerbaijan. He accepted this invitation.”

“Azerbaijan and Italy are located at two points of the Southern Gas Corridor,” the president said. “There are five more countries between us. Indeed, it is very difficult to find an analogue for this unique infrastructure project both technically and financially, and also from the point of view of international cooperation.”

“The project connecting seven countries, funded by leading international financial institutions and being implemented with the participation of many leading companies is the embodiment of Italian-Azerbaijani friendship,” President Aliyev said. “We have managed to realize it only in the conditions of friendship. We can say that we are already at the last stage of the project.”

“At the same time, our main task now is to deepen economic cooperation after the implementation of TAP,” President Aliyev said. “During a luncheon yesterday, I met with the leaders of leading Italian companies. Many of them have been working in Azerbaijan for many years. Others want to start working. We also want this, the contracts signed, as Minister has said, amount to billions of euros. I am sure that further cooperation will be even larger-scale, because we, as strategic partners, must support each other in the field of trade and business.”

“In terms of railway efficiency, we are in 12th place and in terms of air traffic efficiency in 11th,” President Aliyev said. “Azerbaijan, a country without access to open seas, has already become one of the international transport and logistical centers. The East-West transport corridor passes through the territory of Azerbaijan. This became possible after the commissioning of the Baku-Tbilisi-Kars railway implemented on the initiative of Azerbaijan.”

“Cargo is already being transported along these corridors to world markets,” the president said. “In one of the memoranda signed yesterday, a solution was found between the Azerbaijani railways and the corresponding agencies of Italy. We will purchase railway equipment from Italy.”

“A very promising sector is the space industry,” the president said. “Azerbaijan already has three satellites. The experience of Italy in this area is very interesting for us. So far, there have been no ties in the field of space industry between the two countries. However, according to the document signed yesterday, we will establish cooperation in this area.”