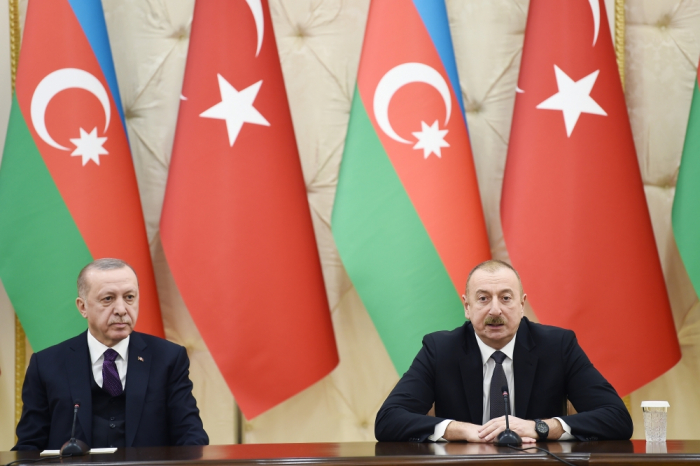 The President of Azerbaijan made the statement first.

Dear representatives of the media!

Mr. President, let me once again warmly welcome you to Azerbaijan! Welcome to Azerbaijan! Your visit is very important. We visit each other on a regular basis, and each meeting is of great importance. After each meeting, a new impetus is given to Turkish-Azerbaijani relations, and these relations are at the highest level today. The eighth meeting of the Azerbaijan-Turkey High-Level Strategic Cooperation Council held today once again showed that our views on all issues coincide, we have the same intentions and goals. They are aimed at ensuring that Turkish-Azerbaijani friendly and fraternal ties continue to develop successfully and cover all spheres.

Many issues were thoroughly discussed today. Very important decisions were made and important documents were signed. We held a broad exchange of views on our political ties and were further convinced that they reflect the will of the two peoples. In all international organizations we advocate a single position. We support each other. Actively interacting in the UN, the OSCE, the Organization of Islamic Cooperation, the Council of Europe and other organizations, we increase each other's strength.

Last year, Azerbaijan assumed chairmanship in the Non-Aligned Movement. It is the second largest organization after the United Nations on a global scale. Today, a wide exchange of views took place on further ties between this organization and Turkey.

Turkey is a country that provides Azerbaijan with the biggest support on a global scale. Thank you very much again for this. For our part, I must note that in all matters and in all international arenas, Azerbaijan always supports the just cause of Turkey. There is no and I am not sure will ever be any issue in which Azerbaijan would not support Turkey. In all the processes currently taking place in the region, the Azerbaijani state and the Azerbaijani people unequivocally stand by the Turkish state and people. Our unity is eternal, and we are certainly building our future on this solid foundation. Therefore, today's eighth meeting of the Council for Strategic Cooperation is a matter of special importance because the countries closest to each other in the world have made very serious decisions on further interaction and cooperation.

With regard to the economic sphere, my dear brother and esteemed President has recently set the goal of bringing our trade to $15 billion. I believe that this is possible because last year our turnover increased by 33 percent to reach $4.5 billion. I am sure that the documents signed today, including the agreement on preferential trade, will give a great impetus to the increase in our trade.

Currently, about 4,000 Turkish companies work in Azerbaijan. they have done work worth $16 billion in more than 300 projects. According to these parameters, Turkey ranks first. I believe that mutual investment is also at a very high level. To date, Azerbaijan has invested 18 billion in the Turkish economy and Turkey $12.5 billion in the Azerbaijani economy. Such a scale of investments once again confirms our brotherhood because such amounts may be invested only in a brotherly country.

Of course, we had a broad exchange of views on further cooperation today. Last November, we celebrated the completion of TANAP in Turkey. This is the main component of the Southern Gas Corridor. I am sure that the Southern Gas Corridor will be fully commissioned by the end of this year because the implementation of its latest project, TAP, has reached 92 percent. Other issues related to energy have also been discussed.

An exchange of views took place on further cooperation in the field of defense. Last year alone, 13 joint military exercises were conducted. There will be even more this year. Azerbaijan will continue acquiring modern weaponry from Turkey, and we also talked about organizing joint production today.

There are great achievements in the transport sector. The Baku-Tbilisi-Kars railway we built together operates successfully. Today we talked about the further functioning of this road, and an important document was signed – a Memorandum of Understanding on the construction of the Kars-Nakhchivan railway. This issue is of particular importance because Nakhchivan has been living in the condition of the blockade for many years because of Armenia’s occupying policy. The delivery of products manufactured in Nakhchivan to foreign markets is a major problem. The construction of the Kars-Igdir-Nakhchivan railway would eliminate this problem, and this will contribute to the development and well-being of the Nakhchivan Autonomous Republic where the only land border between Azerbaijan and Turkey passes. Thank you for this agreement. An exchange of views was also held on further activities and the successful development of Nakhchivan. Three years ago, we prepared a list of goods that can be exported from Nakhchivan to Turkey. We are grateful for that too and I am sure that the number of export operations from Nakhchivan to Turkey will increase in the future.

We also discussed many issues related to agriculture and education today. There is a great potential there as well. In other words, the agenda was quite broad and there were no disagreements on any issue. On the contrary, we have a common opinion, common intentions and common goals – to further strengthen Turkey and Azerbaijan.

I would like to take this opportunity to emphasize the merits of the distinguished President and my dear brother Recep Tayyip Erdogan for the Turkish people. Thanks to his tireless activity, Turkey is a global power center today. Not a single issue in the region where Turkey is located and all over the world can be resolved without its participation, and the latest history showed this. We are very happy about this because the strength of Turkey multiplies our own strength. And the union of our forces makes us even stronger. I am sure that we will always be next to each other and rejoice at each other's successes. In difficult days, God forbid, we will always be next to each other.

I sincerely welcome you again, dear brother! I wish you and the fraternal Turkish people continued prosperity and happiness. Thank you! 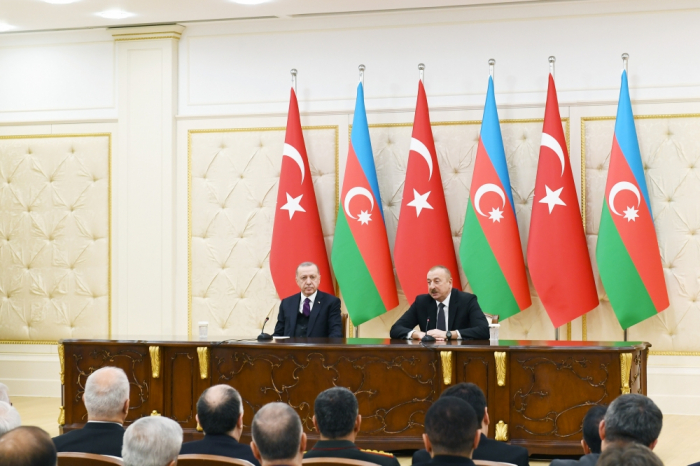 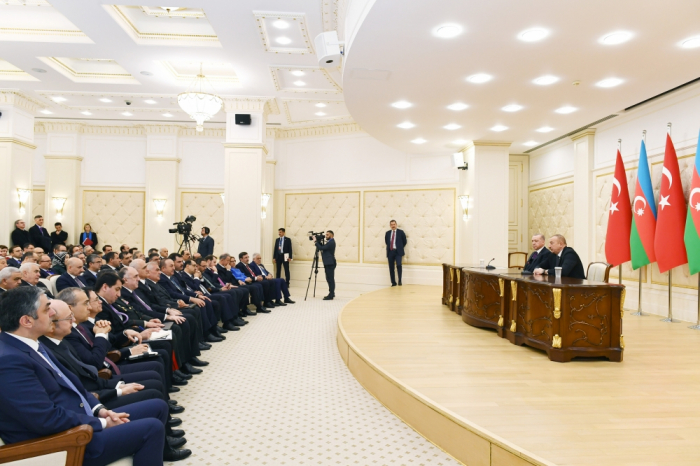 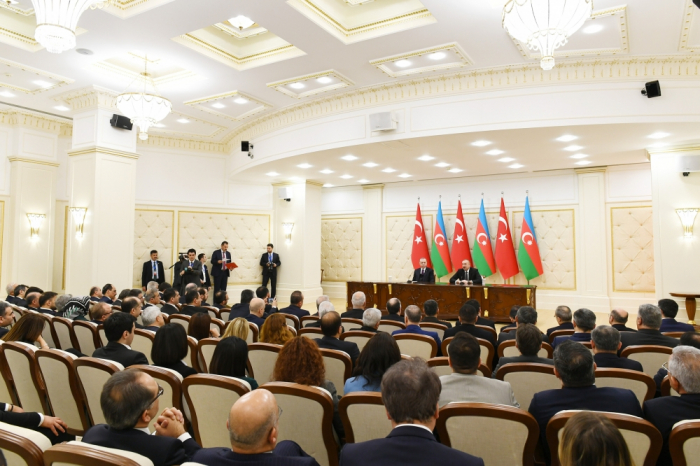