Karabakh as much our issue as Azerbaijan's: Erdogan 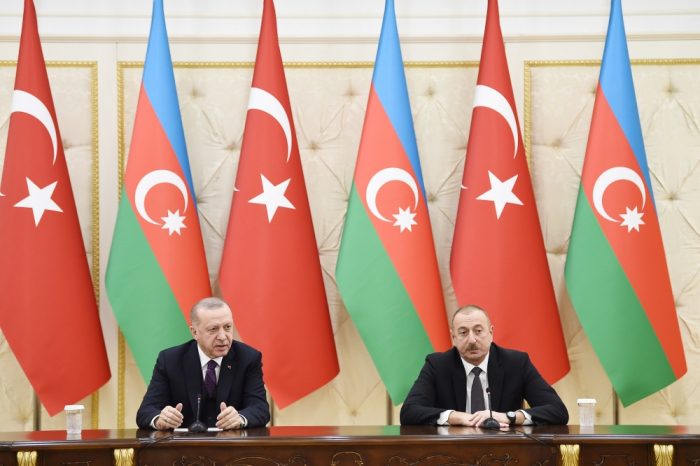 Turkish President Recep Tayyip Erdogan said Tuesday the Nagorno-Karabakh is as much Turkey’s issue as it is Azerbaijan's, AzVision.az reports citing Anadolu Agency.

"It is our greatest desire to resolve the problem of Nagorno-Karabakh on the basis of Azerbaijan's sovereignty and territorial integrity," Erdogan said at a joint news conference with his Azerbaijani counterpart Ilham Aliyev.

He said the railway connecting Turkey to Azerbaijan’s autonomous region of Nakhchivan, which is surrounded on the east and north with rival Armenia, holds great strategic importance.

Praising the brotherly ties between the two countries, Erdogan said: "We will boost the trade volume [with Azerbaijan] to $15 billion in 2023, this is our aim.”

Last year, the trade volume of the two countries was $2 billion.

The Turkish president’s remarks came after the eighth edition of the High-Level Strategic Cooperation Council meeting -- which was established in 2010 to enhance ties at the presidential level.

Erdogan thanked the people and government of Azerbaijan for their support to Turkey after a powerful earthquake hit the country’s east in January.

Aliyev said the high-level meeting was proof that Azerbaijan and Turkey are on the same page on critical issues.

Referring to the Nagorno Karabakh conflict, Aliyev thanked his Turkish counterpart for "always supporting the righteous stance" of Azerbaijan at the international front.

"Unfortunately, the non-constructive and negative stance of Armenia is the main obstacle in solving the dispute," he said.

Nagorno Karabakh is the internationally recognized territory of Azerbaijan illegally occupied by Armenia through military aggression since 1991.

Four UN Security Council and two General Assembly resolutions, as well as decisions by many other international organizations, refer to this fact and demand withdrawal of the occupational Armenian forces from Nagorno Karabakh and seven other occupied regions of Azerbaijan.

The Organization for Security and Co-operation in Europe (OSCE) Minsk group -- co-chaired by France, Russia and the U.S. -- was formed to find a peaceful solution to the conflict, but has not reached any results yet.