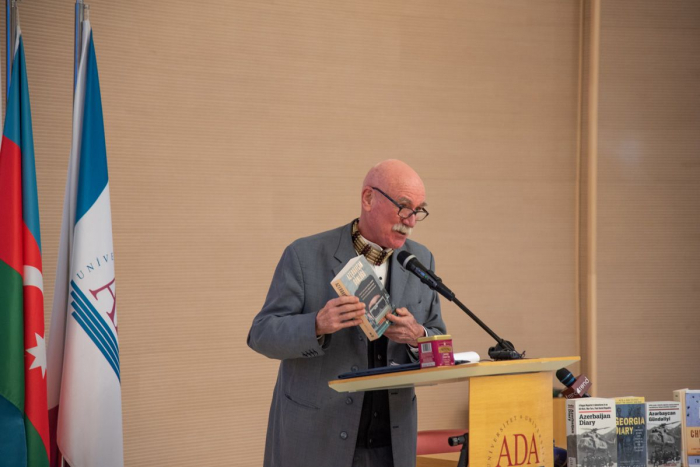 The events in the Azerbaijani town of Khojaly in February 1992 were clearly a crime, Professor at the University of Montana, journalist Thomas Goltz said, AzVision.az reports citing Trend.

“I understand and sympathize deeply with the Azerbaijanis’ frustration of not having been able to bring the perpetrators of this crime to justice, namely, [Serzh] Sargsyan – former President of Armenia,” Goltz said.

“Unfortunately neither Azerbaijan nor Armenia was the member of UN or any of the international institutions,” he said. “The problem is how to do that in the international framework.”
He said that the Khojaly massacre has been acknowledged and the events of that night severely condemned in the US, Mexico, various European countries.

“This was achieved through the efforts of Azerbaijani activists in the world,” he said.

“All the three members of the Minsk group which are Russia, France and US have some stance of Armenian minorities which are very-very active,” he said. “So the idea of getting something pro-Azerbaijani is not going to happen within the Minsk group, let's be realistic.”

The conflict between the two South Caucasus countries began in 1988 when Armenia made territorial claims against Azerbaijan. As a result of the ensuing war, in 1992 Armenian armed forces occupied 20 per cent of Azerbaijan, including the Nagorno-Karabakh region and seven surrounding districts.
On February 25-26, 1992, the Armenian armed forces, together with the 366th infantry regiment of Soviet troops stationed in Khankendi committed an act of genocide against the population of the Azerbaijani town of Khojaly.

As a result of the massacre, some 613 people were killed, including 63 children, 106 women and 70 old people. Eight families were totally exterminated, 130 children lost one parent and 25 children lost both. A total of 487 civilians became disabled as a result of the onslaught. Some 1,275 innocent residents were taken hostage, while the fate of 150 people remains unknown.

The two countries signed a ceasefire agreement in 1994. The co-chairs of the OSCE Minsk Group, Russia, France and the U.S. are currently holding peace negotiations. Armenia has not yet implemented the U.N. Security Council`s four resolutions on the liberation of the Nagorno-Karabakh and the surrounding regions.