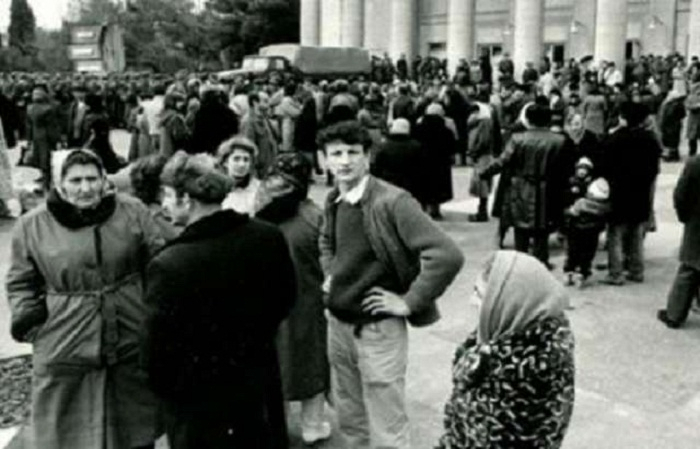 Today marks the 32nd anniversary of the Sumgayit events.

The riots were masterminded by Armenian nationalists, and Armenian provocateurs who spoke fluent Azerbaijani infiltrated to the city.

The events were part of a scenario carried by the USSR State Security Committee in collaboration with Armenians. Edward Grigoryan, who had been selected to carry out the provocation in Sumgayit, was also an Armenian who had been in prison twice. Although Ahmad Ahmadov was sentenced to capital punishment as one of the masterminds behind the riots, eyewitness testimony proves that the criminal was actually Edward Grigoryan.

During the incidents, hundreds of Azerbaijanis risked their lives by protecting Armenian troops from angry crowds.

Armed units that had entered the city under the command of General Krayev, watched the events from the sidelines, and intervened only on February 29. As a result, 6 Azerbaijanis were killed by tank caterpillars, 400 people were injured, 200 flats were plundered, 50 cultural and social facilities were destroyed, and more than 40 vehicles were made useless.

Almost all Armenians killed were those who had refused to transfer money to Armenian terrorist funds. Edward Grigoryan personally killed 5 Armenians, raped 8 Armenian women. However, Armenian organizations were able to save Grigoryan, who had committed such crimes, from being brought to justice. Grigoryan was sentenced to 12 years of imprisonment, but he was released a few years later. Another convicted person was Azerbaijani Ahmad Ahmadov, who was sentenced to death by the Moscow court, and the verdict was implemented.

Moreover, about 3,000 innocent Sumgayit residents were arrested for the riots. Of them, 400 were brought to administrative responsibility, while criminal cases were filed against 94 people.