Turkey to supply modern weapons and military equipment to Azerbaijan 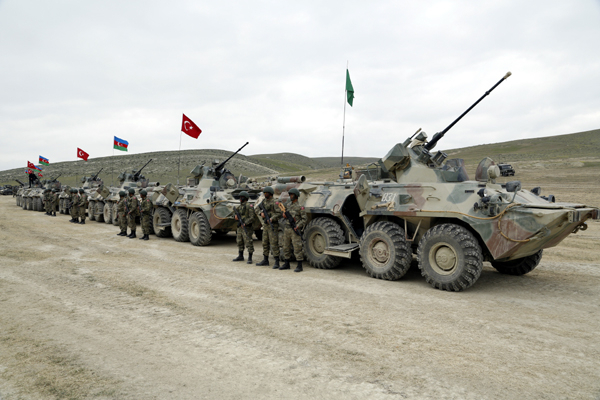 The military ties between Azerbaijan and Turkey are intensively developing, Spokesman for the Azerbaijani Defense Ministry Vagif Dargahli told Trend on Feb. 28.

Dargahli stressed that a signing ceremony of important documents covering many spheres was held on February 25 following the 8th meeting of the Azerbaijan-Turkey High-Level Strategic Cooperation Council with the participation of Azerbaijani President Ilham Aliyev and Turkish President Recep Tayyip Erdogan.

"In accordance with these documents, Azerbaijani officers and cadets will be able to study in Turkish military schools,” the spokesman added. “Modern weapons and military equipment, which will increase the combat effectiveness of the Azerbaijani army, will be supplied from Turkey to Azerbaijan."

The spokesman stressed that the Turkish Armed Forces are contributing to the development of cooperation between Azerbaijan and NATO.

The first military contract between Azerbaijan and Turkey was concluded in 1992. The numerous agreements on cooperation in the military, military-technical, military-medical, military-educational spheres and others were signed in this sphere in subsequent years.

The military relations between Azerbaijan and Turkey are based on a number of legal acts regarding the training of the Azerbaijani servicemen in Turkey, conducting of joint military exercises, cooperation in the technical and scientific fields and the regular holding of the meeting of the Azerbaijan-Turkey High Level Military Dialogue.

The specialized courses in Turkey have been held for 9,000 Azerbaijani servicemen up till now.

Some 100 Azerbaijani servicemen are sent from Azerbaijan to Turkey every year for free medical treatment upon the agreement on cooperation and education in the military medical field signed between Azerbaijan and Turkey on December 19, 2018.

One of the important factors contributing to the development of military ties between the two countries is the holding of joint military exercises, which are aimed not only at strengthening the Azerbaijani army but also ensuring peace and security in the region.