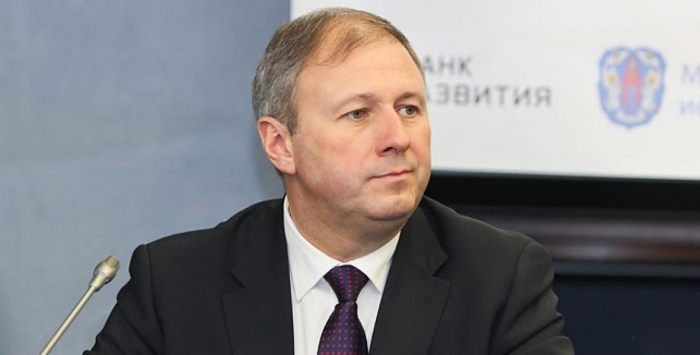 Belarus is interested in a long-term contract on buying Azerbaijani oil. Prime Minister of Belarus Sergei Rumas made the statement as he met with President of the State Oil Company of the Azerbaijan Republic (SOCAR) Rovnag Abdullayev on 2 March, AzVision.az reports citing BelTA.

Sergei Rumas said: “Belarus is interested in signing a long-term contract on deliveries of Azerbaijani oil. We intend to have this oil refined by Mozyr Oil Refinery using the Odessa-Brody-Mozyr oil pipeline. I believe such cooperation will be interesting for SOCAR company as well.”

The head of government reminded that Belarus and SOCAR have a long history of cooperation on the oil market. Belarus bought oil from SOCAR in 2011 and 2016. The Azerbaijani side buys Belarusian oil products.

Sergei Rumas went on saying: “It is no secret that Belarus is working on diversifying oil deliveries. We used to buy all the oil from the Russian Federation up till now. But the price for oil for Belarus will reach the standard market level by 2024 due to the ongoing tax maneuver. Certainly, Belarus' energy security cannot be ensured without alternative oil deliveries these days. This is why we would like to find reliable partners to sign long-term contracts with. Practice demonstrates that SOCAR can be such a reliable partner.”

The prime minister noted that the Belarusian side does not rule out oil import from the Russian Federation. “We are not going to completely rule out oil delivery from Russia at present. We just have to diversify oil import up to a certain level,” he explained.

In his words, taking into account SOCAR's vast experience in the sphere of civil engineering and work at Mozyr Oil Refinery the Belarusian side is interested in the involvement of highly qualified workforce of the Azerbaijani company in construction as part of other major investment projects in Belarus.

The head of government said he hopes that today's meeting will be another step towards stronger bilateral relations in oil industry between SOCAR and Belneftekhim.

Deputy Prime Minister of Belarus Igor Lyashenko, who is entrusted with overseeing oil industry affairs, and Chairman of the Belarusian state petrochemical concern Belneftekhim Andrei Rybakov were also present at the meeting.

As much as 160,000 tonnes of Russian oil bought for Belarusian oil refineries via traders without paying a premium is supposed to be delivered to the Lithuanian port of Klaipeda in March.

Deputy Prime Minister of Belarus Igor Lyashenko told BelTA that this year Belarusian oil refineries have been getting about 1 million tonnes of oil per month for processing. The same volume is expected in March.

On 1 January Russia suspended oil deliveries to Belarus because the sides had failed to come to an agreement about the price. First Deputy Prime Minister of Belarus Dmitry Krutoi was quoted as saying that Belarus believes it is economically inadvisable and pointless to pay the same amounts of premium to Russian companies. Representatives of the government also stated that all possible options for alternative deliveries were being looked into.