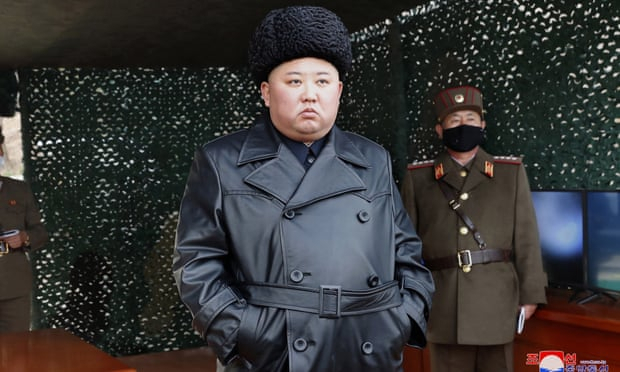 The projectiles were launched on Monday from the coastal town of Sondok, South Korea’s Joint Chiefs of Staff (JCS) said. The town hosts a military airfield and North Korea fired missiles from the area last year.

The projectiles included artillery fired from a multiple launch rocket system and flew up to 200kms (124 miles) and reached 50 km in altitude, JCS said.

“The military is monitoring for additional launches and maintaining readiness,” the JCS said in a statement.

Japan’s defence minister, Taro Kono, said the projectiles appeared to be ballistic missiles and did not fall into Japan’s exclusive economic zone, though the government was examining details about the launch.

North Korea fired two short-range missiles off the east coast into the sea on 2 March after a three-month halt. The launches, which officials have said were routine military drills, were personally overseen by North Korean leader Kim Jong Un.

In the aftermath of that launch, the North Korean president’s sister, Kim Yo-jong’s, condemned South Korea as a “frightened dog barking” went it lodged protests against the launches.

The launches came as negotiations with the US were at a standstill and after the expiry of a unilateral deadline Pyongyang set for Washington to offer it fresh concessions on sanctions relief.

Pyongyang is under multiple sets of sanctions over its weapons programmes from the United Nations Security Council, US, South Korea and others.

The sister of North Korea’s leader said recent drills were not meant to threaten anyone, according to a statement carried by state news agency KCNA last week.