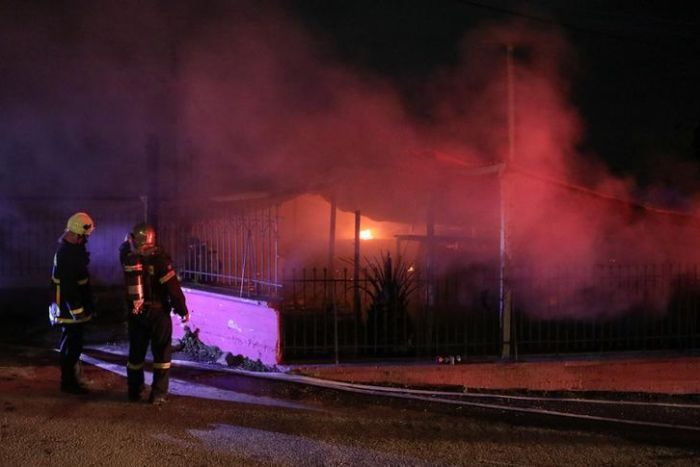 A fire has broken out at a volunteer-run community centre for migrants on Greece's Lesbos island, amid tensions over a surge in people crossing the border from Turkey.

The Swiss-based One Happy Family NGO had set up a barbershop, cinema, gym, and four classrooms for both adults and children at the building, near Lesbos's main port of Mytilene.

The fire reduced the classrooms to charred rubble.

It was the second fire at an installation built for migrants on the island, after a reception centre was burned down last Monday.

Turkey and the European Union are at odds over is responsible for the millions of migrants and refugees on Turkish territory, and the thousands who have massed recently at the Greek border.

Lesbos — which lies just a few miles off the Turkish coast — currently hosts more than 21,000 migrants, most of them living in the overcrowded Moria camp, which was originally intended to accommodate fewer than 3,000.

The island was the frontline of the 2015-2016 migrant crisis, when more than 800,000 people fleeing war and persecution in the Middle East passed through on their way to other European countries.

A fresh wave of hundreds of arrivals reached the Aegean islands by sea in the last week, after Turkey eased controls on migrants leaving the country, has raised tensions.

Aid organisations have started pulling out volunteers after being harassed. On the road to the Moria camp, informal roadblocks have sprung up, manned by locals quizzing people about their movements.

In the past week locals prevented one boatload of migrants from disembarking at a small harbour.

Islanders say they are being forced to shoulder a disproportionate share of the migrant burden, and want Moria shut down.

Turkish President Recep Tayyip Erdogan's Government announced earlier this month that it would no longer prevent migrants and refugees from crossing over into EU countries.

Since then, there have been clashes between Greek riot police and border guards on one side, and migrants on the other.

Migrants who have made it into Greece have reported being beaten by Greek authorities and summarily forced back into Turkey.

On Sunday, Mr Erdogan urged Greece to "open your gates" to refugees.

"We were hoping to get much more support from the international community when it comes to refugees," Mr Erdogan said.

"We have fulfilled the obligations of the agreement we have made with the EU.

"However, the EU did not fulfil its commitments except for minimal contributions — I hope we will achieve different results this time."

German Foreign Minister Heiko Maas said "negotiating on the backs of the weakest" would not yield the desired result.

The 2016 Turkey-EU agreement on containing the refugee flows to Europe has now collapsed, and Mr Erdogan is set to travel to Brussels this week for talks with EU officials.

The deal called for Turkey to halt the flow of Europe-bound migrants and refugees in exchange for up to 6 billion euros ($10 billion) in aid for Syrian refugees on its territory, fast-tracked EU membership, and visa-free travel to Europe for Turkish citizens.

Mr Erdogan has demanded Europe shoulder more of the burden of caring for refugees, accusing the EU of failing to disburse the money.

Turkey houses more than 3.5 million Syrian refugees and Mr Erdogan has warned it will no longer act as "Europe's gatekeeper".

EU foreign ministers have criticised Turkey, saying it is using the migrants' desperation "for political purposes."

EU countries are still dealing with the political fallout from a wave of mass migration five years ago.