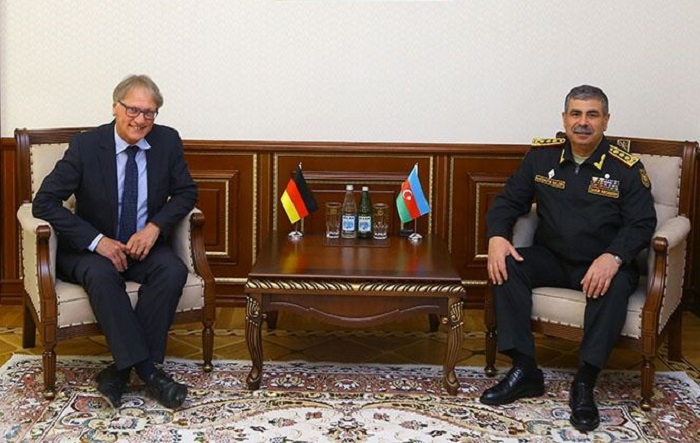 The minister congratulated the ambassador on the commencement of diplomatic activity in Azerbaijan and wished him success in expanding cooperation between Azerbaijan and Germany.

Touching upon the military-political situation in the region, Hasanov stressed the continuation of Armenia’s aggression policy.

The minister noted that despite the efforts of the OSCE Minsk Group co-chairs in the settlement of the Armenia-Azerbaijan Nagorno-Karabakh conflict, peaceful negotiations are deliberately delayed by Yerevan.

Hasanov expressed gratitude to the ambassador for the recognition and respectful attitude of Germany to Azerbaijan’s territorial integrity.

Noting that relations in various fields between Azerbaijan and Germany are built on a solid foundation, the minister spoke about the prospects for the development of cooperation both in the bilateral format and within the NATO programs, in particular in the field of military education.

Manig, in turn, expressed satisfaction with the development of relations between the two countries and emphasized that Germany will make every effort to expand relations with Azerbaijan, as well as will contribute to the development of cooperation in the military sphere.

During the meeting, the parties discussed the prospects of service by officers of the Azerbaijani Army at the headquarters of the German Armed Forces to exchange experience, the participation of representatives of the Azerbaijani Army as observers in military exercises involving German servicemen, the organization of mutual visits of military experts, the joint security of regional energy projects and other issues of mutual interest.

The sides stressed that the implementation of new projects in the field of military cooperation between Azerbaijan and Germany will be continued this year.