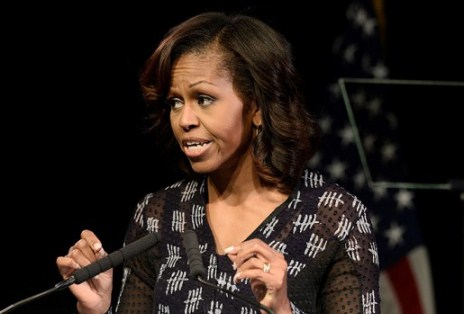 Michelle Obama, America`s first lady, believes the country is ready for its first female president but don`t expect her to run
Her comments came in an interview with Parade magazine, in which she also discussed her famous "bangs" and turning 50 next year.

Asked if she thought the country would see a female president in her lifetime, Mrs Obama said: "Yes, I think the country is ready for it. It`s just a question of who`s the best person out there."

She declined to comment on the prospects of Mrs Clinton running to succeed Obama in 2016.

Mrs Clinton, a former US senator and secretary of state during President Obama`s first, has avoided declaring whether she will seek the nation`s highest office.

She left her post as the top US diplomat in February and polls released three years before the Democratic nominating convention suggest she is ahead – both in the Democratic primaries and in the theoretical general election.

Earlier this week, the husband of one of her close aides appeared to hint that a Hillary 2016 campaign was already up and running.

But of Mrs Clinton`s prospects, Mrs Obama said, "She hasn`t announced anything, so I`m certainly not going to get ahead of her."

Mrs Obama also said she thought her husband`s time in office had helped ease racial prejudice in the US.

"Children born in the last eight years will only know an African-American man being president of the United States.

That changes the bar for all of our children, regardless of their race, their sexual orientation, their gender," she said.

She added that she had no fears about reaching the age of 50 in January.

"I have never felt more confident in myself, more clear on who I am as a woman," she told the magazine. "But I am constantly thinking about my own health and making sure that I`m eating right and getting exercise and watching the aches and pains. I want to be this really fly 80-, 90-year old.