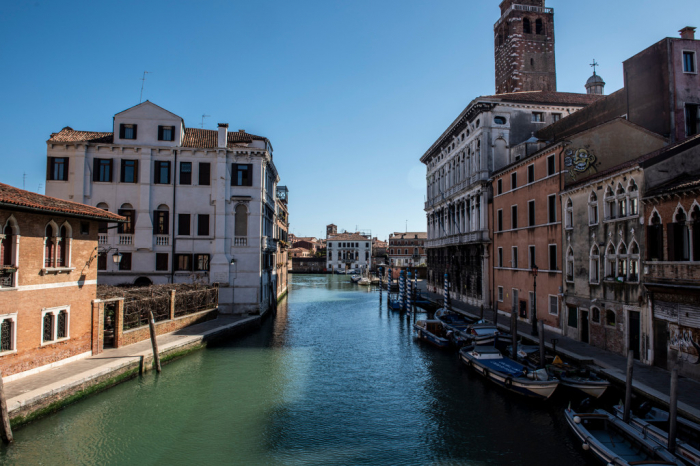 The novel coronavirus is causing panic worldwide, but one thing may benefit from the social isolation: the environment.

As a result, people stayed indoors, business shuttered their windows, cars stayed parked and families hunkered down to protect themselves from getting sick.

Cruise ships are typically seen sailing into the Venice lagoon and have caused harmful levels of pollution, Euro Weekly News writes. Without them, the water has had a chance to clear.

The decline in tourism has brought “back the lagoon waters of ancient times, those of the post-war period, when it was even still possible to bathe in the waters of the canals,” according to local newspaper La Nuova di Venezia e Mestre.

Though social isolation has been difficult, it’s had a massively positive effect on CO2 emissions, according to European Space Agency data analyzed by the Washington Post.

Between Jan. 1 and March 12, concentrations of nitrogen dioxide fell — produced by cars and power plants — immensely, especially over Italy, according to the ESA’s Sentinel-5P satellite.

“I guess this is mostly diesel cars out of the road,” said Emanuele Massetti, an expert on the economics of climate change at Georgia Tech, according to the Washington Post.

Since Jan. 1, air quality in China has significantly improved, too, per pollution monitoring satellites from NASA and the European Space Agency.

As with Italy, social isolation and the lockdown of certain cities has seen a decrease in cars on the road, meaning noxious gas emitted by vehicles, power plants and industrial facilities have come to a near complete halt.

Scientific American notes that events like the 2008 recession caused similar dips in global carbon emissions. On the flip side of things, the publication notes that more social isolation means people are likely using more energy in their homes — not a good thing.

It all depends on geography and family lifestyle.

"If you come home to a cold house and you have to heat it, that’s going to more than offset the savings from not driving your vehicle to work, on average,” Christopher Jones, a climate policy expert at the University of California, Berkeley, told Scientific American.

“If you come home to a beautiful day like we have in California, and there was somebody home anyway, really we’re not using much more energy than if I were at work.”

Household carbon footprints could potentially rise, offsetting the lowering of global emissions as a result of isolation during the outbreak.