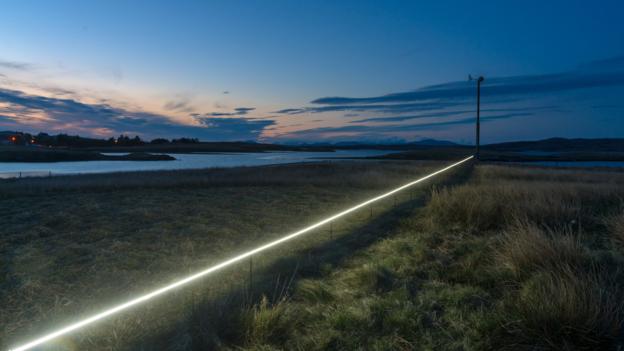 Devon Van Houten Maldonado asks artists and curators to imagine the changes and trends that will influence the art world in the next two decades.

The future may be uncertain, but some things are undeniable: climate change, shifting demographics, geopolitics. The only guarantee is that there will be changes, both wonderful and terrible. It’s worth considering how artists will respond to these changes, as well as what purpose art serves, now and in the future.

Reports suggest that by 2040 the impacts of human-caused climate change will be unescapable, making it the big issue at the centre of art and life in 20 years’ time. Artists in the future will wrestle with the possibilities of the post-human and post-Anthropocene – artificial intelligence, human colonies in outer space and potential doom. 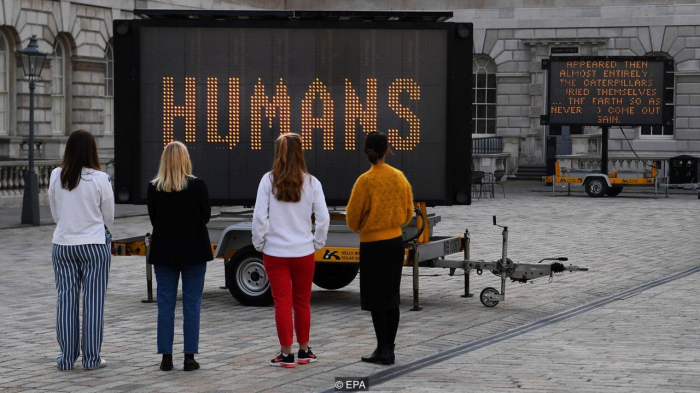 An installation by Justin Brice Guariglia, just one of the artists who is creating work that concerns climate change (Credit: EPA)

The identity politics seen in art around the #MeToo and Black Lives Matter movements will grow as environmentalism, border politics and migration come even more sharply into focus. Art will become increasingly diverse and might not ‘look like art’ as we expect. In the future, once we’ve become weary of our lives being visible online for all to see and our privacy has been all but lost, anonymity may be more desirable than fame. Instead of thousands, or millions, of likes and followers, we will be starved for authenticity and connection. Art could, in turn, become  more collective and experiential, rather than individual.

“I imagine art in 20 years will be much more fluid than it is today,” curator Jeffreen M Hayes tells BBC Culture, “in the sense of boundaries being collapsed between media, between the kinds of art that is labelled art, in the traditional sense. I also see it being much more representative of our growing and shifting demographics, so more artists of colour, more female-identified works, and everything in between.”

Hayes’s exhibition AfriCOBRA: Nation Time was recently selected as an official collateral event of the 2019 Venice Biennale which opens in May, bringing the work of a previously little-known and uncelebrated group of black artists working on Chicago’s south side in the 1960s to an international audience.

“I’m hopeful that in 20 years, as art shifts and artists help to lead the way, that institutions begin to be, not just intentional, but more thoughtful about the different ways that art can be presented, and that would require a more inclusive, not just curatorial staff, but also leadership,” she says.

Senegalese artist and curator Modou Dieng tells BBC Culture “the future of art is black.” Today, African, African-American, Afro-European, and Afro-Latin art is trending globally, marked by an opening to African diaspora artists working with discourses beyond the black body and colonialism. Black abstraction, curating and performance are all centre stage. Growing up in a newly independent Senegal looking for an identity as a people, “we saw migration as the solution, not the problem,” says Dieng, whose works are included in the US Department of State’s permanent collection. 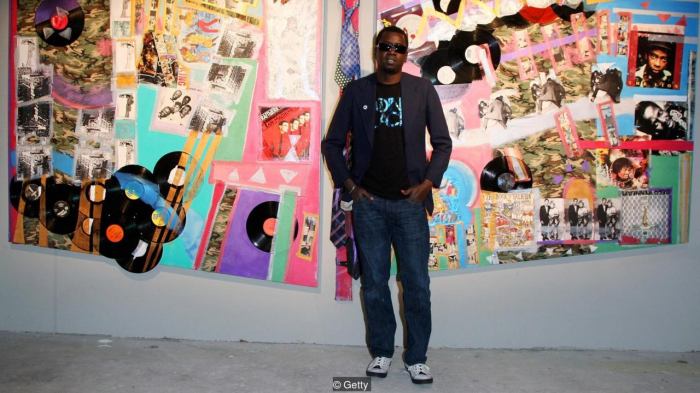 The change anticipated by Hayes and Dieng does not translate to the new emergence of black, Latino, LGBT, outsider, feminist and ‘other’ art, as these movements have long histories of their own. But it merely means that they will be further embraced by the markets and the institutions, which will themselves become more diverse and informed by histories outside the dominant, Eurocentric, Western canon.

Activism-art campaigns are indicative of shifting trends toward accountability, also revealing of entrenched power dynamics and dirty money in the art world. Decolonize This Place, an amorphous group of artists and activists describing themselves as an “action-oriented movement centring around Indigenous struggle, Black liberation, free Palestine, global wage workers and de-gentrification,” are currently undertaking protests inside New York’s Whitney Museum of Art against vice chairman Warren B Kanders, who owns a company that manufactures tear-gas used against oppressed people around the world.

The artist-activists of the Decolonize This Place movement aren’t the first in history to be disruptive, usually to the dismay of institutions. During World War One a group of artists calling themselves the Dada started to stage disruptive, experimental interventions as a protest against the senseless violence of the war. The Dada was considered the most radical avant-garde movement in the early 20th Century, followed by the Fluxus artists in the 1960s, who similarly sought to employ shock and senselessness in order to change artistic and social perceptions. The legacy of these performative movements continues in works by artists like Paul McCarthy and Robert Mapplethorpe. "Shock functions as part of the movements' attempt to change society," writes Dorothée Brill in Shock and the Senseless in Dada and Fluxus. "This endeavour will be shown to as being linked to the artists' rejection of the idea that artistic production must make sense and be meaningful." 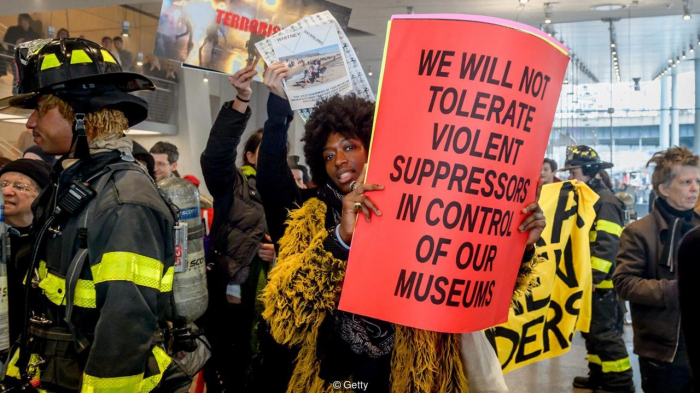 “I hope that art will continue to be a space for formal innovation, radical experimentation and lawlessness,” curator Chris Sharp tells BBC Culture, “in order to continue to evade the instrumentalisation of capitalism, politics and ideology, carving out a space for neither right nor wrong thinking, but rather thought which can be neither qualified nor quantified.” When we spoke, Sharp was in Milan for the art fair with his Mexico City gallery, Lulu, before traveling to Venice, where he is co-curating the New Zealand Pavilion for the May Biennale with Dr Zara Stanhope and artist Dane Mitchell.

Those who believe in ‘art for art’s sake’ might say that art as an unquantifiable force must remain outside social or ideological norms, or risk becoming something else. Some experts like Sharp argue that it’s a slippery slope when art starts leaning toward activism because that’s just not the point. (Though the curator also argues that it's impossible for art to be apolitical). It's a viewpoint committed to art as a force on its own, a process of radical experimentation that results in an artwork, one of many along a line of inquiry, not a means to illustrate an end or impregnate an object with meaning. No conclusions should be drawn about art, present or future because it is the force against universalism, which must be interrupted by artists, as if to tell the world “wake up!”

Painting is (not) dead

In two decades’ time, it will have been 200 years since Paul Delaroche exclaimed “painting is dead”, and there are reasonable arguments against how relevant the medium is as a tool of the avant-garde. Delaroche’s original idea has been repeated and recycled endlessly as new mediums have worked their way into and out of the spotlight, but painting isn’t likely to be going anywhere.

Painting sales are still the major driver of auction houses, art fairs and galleries, dominating all record-breaking art sales. Modern paintings made during the first half of the 20th Century continue to hold steady as the most desirable and most expensive artworks on the market. Nine of the 10 most expensive paintings ever sold were made between 1892 and 1955, the only exception being a newly discovered Leonardo da Vinci from between 1490 and 1519, which fetched an extraordinary $450.3m (£341m) at auction, making it the most expensive artwork ever sold. Every painting on the list was made by a white man, however, which doesn’t paint a very hopeful picture for equality. 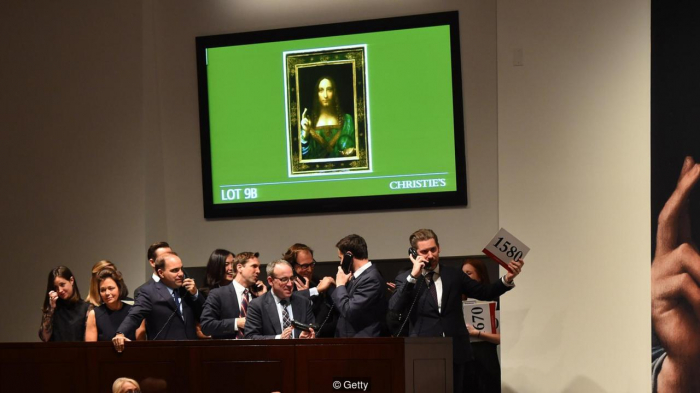 Leonardo da Vinci’s Salvator Mundi sold at auction in 2017 for over $450m, making it the most expensive painting ever sold (Credit: Getty)

In 20 years, the market might not be very different than it is today – dominated by modern painting – but perhaps works from the second half of the 20th Century, including more women and minority artists, will begin to accrue value: in 2017 a painting by Jean-Michel Basquiat, Untitled (1984), set a new record for the most expensive contemporary artwork sold at auction for $110.4m (£85.4m). Last year the market for contemporary African and African diaspora also set records, with Kerry James Marshall fetching an astounding $21.1m for his painting Past Times (1997), a new record for living African-American artist.

Maite Borjabad, curator of architecture and design at The Art Institute of Chicago, says that we should be “ready for things to happen that you cannot even anticipate.” In other words, we can’t expect to predict one future, but instead should prepare for many futures. 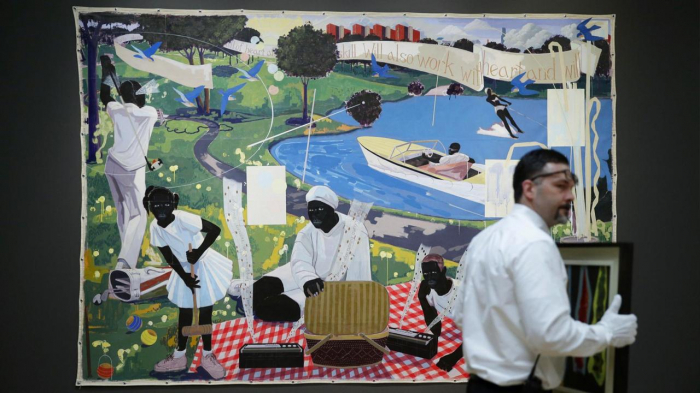 “Cultural institutions and collections are highly political and have perpetuated and consolidated a very dogmatic understanding of history,” she continues. “That’s why collections like the Art Institute are the perfect material to help us rewrite histories, plural, rather than just a history.”

In the year 2040, art might not look like art (unless it’s a painting), but it will look like everything else, reflecting zeitgeists as multitudinous and diverse as the artists themselves. There will be artist-activists leading political upheaval; there will be formal experimenters exploring new mediums and spaces (even in outer space), and there will be strong markets in Latin America, Asia and Africa. So in the world of culture at least, the West may find itself playing catch up.