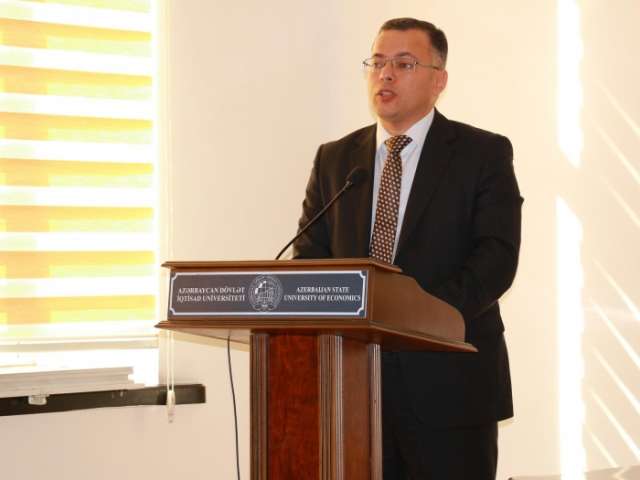 As opposed to the regional countries, Azerbaijan did not prefer external borrowing or devaluation but relies only on its own resources in the fight against the crisis associated with the threat of coronavirus, Executive Director of the Azerbaijani Center for Economic Reforms Analysis and Communication Vusal Gasimli told reporters.

“Despite in the first quarter, tax and customs bodies exceeded the income forecast by more than 312.2 million manat ($183.6 million), the uncertainty in connection with deepening of global recession and pandemic negatively affects income,” Gasimli said.

“As long as global shocks continue, revenues and expenditures are reviewed as part of a fiscal support policy for the national economy,” the executive director said.

Gasimli stressed that many countries of the former Soviet Union have already decided to take the measures regarding the budget.

“So, Russia decided to change the budget parameters for 2020-2022,” the executive director said. “Under the influence of global shocks, the Kazakh government also prepared the proposals to increase revenues and expenses in the budget for 2020. The Ukrainian government hopes to cover the budget deficit by borrowing $5 billion from the International Monetary Fund (IMF) as part of the Extended Fund Facility (EFF) tranche in exchange for certain commitments. Georgian government, predicting losses of $4.3 billion, began negotiations with international financial institutions on borrowing in the amount of $1 billion.”

“All regional countries, except Azerbaijan, Russia and Kazakhstan, which have a "safety cushion", are trying to balance the state budget for 2020 by increasing external public debt and revising the budget deficit, which is very expensive,” the executive director said.

“Within the current budget legislation, 1.3 billion manat ($764.7 million) has been allocated from the presidential reserve fund and other reserve sources to combat the crisis, in particular, to change and set a number of expenses by re-assessing the priority of budget expenditures,” Gasimli said.

“Moreover, the efficiency of investments and current expenses is expected to further increase, as well as new financial sources are expected to be searched to ensure the budgetary funds to combat the crisis, the financial burden of which exceeds 2.5 billion manat ($1.5 billion),” said the official.

“Not only budget parameters are being reviewed in Azerbaijan, but also the macroeconomic framework is being changed as the need arises to revise fiscal and, accordingly, macroeconomic policy to change the budget framework,” Gasimli said. “The correct preparation of macroparameters stipulates the forecasting of budget indicators.”

“For this purpose, the accounts of production, primary and secondary distribution and final use must be analyzed in the National Accounts System,” Gasimli said.

“It is also necessary to reevaluate GDP on the basis of an analysis through the expenditure method to match the functional classification (including economic classification) of the state budget,” the executive director said.

“An analysis of GDP through the expenditure method shows that in the remaining part of the year, the consumption of households and state agencies, as well as net export, will tend to decrease, but, on the other hand, due to low prices, oil revenues, as well as twenty spheres of the non-oil sector most affected as a result of the pandemic will decrease,” Gasimli said.

“Proceeding from these goals, determining of the priorities in spending in the budget policy, further increasing of transparency and increasing of the efficiency of spending have been determined as the main directions,” the executive director added.

“Moreover, the attraction of private investments will be decisive in ensuring sustainable economic growth," Gasimli added.