Almost an ally: Italy’s new approach to Azerbaijan and the Nagorno-Karabakh conflict 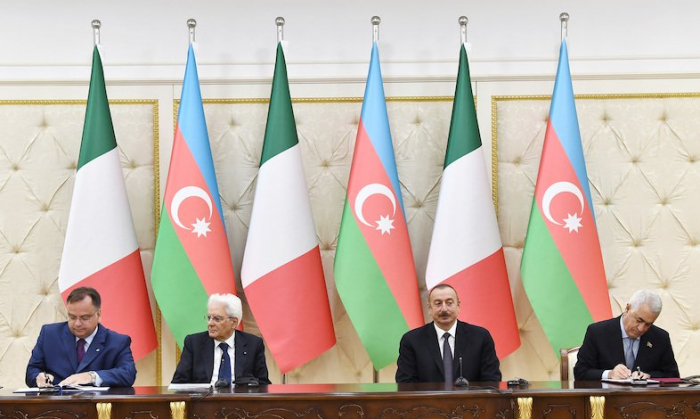 While recent agreements between Italy and Azerbaijan are economically significant, their political dimension is even more significant, especially as regards the Nagorno-Karabakh conflict.

President Ilham Aliyev’s state visit to Italy in February 2020 was unique in Azerbaijan’s modern history. The trip marked a qualitative leap in the relationship between the countries – as reflected in the agreements they reached during it, as well as the size and institutional profile of the Azerbaijani delegation, which participated in a business forum hosted by the Italian Foreign Ministry. Baku’s significant political investment in the relationship appears to have met with enthusiasm from the Italian business world and, most significantly, a reciprocal effort by the Italian government. Officials in Rome have described their push to deepen the relationship as a “precise political choice” and the focus of “very high expectations”.

Much of the Italian and foreign press coverage of the event has focused on the economic dimension of the agreements. Indeed – in line with the joint declaration on a “multidimensional strategic partnership” Aliyev and Italian Prime Minister Giuseppe Conte signed during the trip – the relationship moved far beyond its traditional driver, the energy sector, to embrace other strategically important areas such as defence, infrastructure, and investment. Coming shortly before the inauguration of the Trans Adriatic Pipeline, which will deepen economic interdependence between Italy and Azerbaijan, the countries have established what they call a “mutually beneficial” partnership. Within this partnership, Baku hopes to diversify the Azerbaijani economy and Rome to address Italy’s bilateral balance of payments deficit.

However, while the agreements between Italy and Azerbaijan are economically significant, it is their political dimension that could bring about the greatest qualitative leap in the relationship. The joint declaration affirms the parties’ support for the peaceful resolution of the Nagorno-Karabakh conflict based upon the principles of sovereignty, territorial integrity, and the inviolability of national borders – that is, the pillars of international law on which Azerbaijan has traditionally based its claims against Armenia. This signals a significant departure from – if not the de facto repeal of – Rome’s established policy of equidistance between Azerbaijan and Armenia. The declaration’s overall political scope is unaffected by its general reference to the fundamental principles of the Helsinki Final Act.

Moreover, the joint declaration is the first Italian pronouncement on Nagorno-Karabakh to make no explicit reference to the Organisation for Security and Co-operation in Europe’s Minsk Group, the body that has mediated negotiations between the warring parties for almost three decades. The Azerbaijani authorities have long argued that the Minsk Group, of which Italy is a permanent member, is ineffective and biased – with a view to stimulating parallel negotiations or changing the talks’ current format.

In this context, Rome has made a major concession to Baku in the joint declaration – by adopting a clear position on the issue and, accordingly, responding to Azerbaijani claims that the West has double standards in its approach to protracted conflicts in Eastern Europe. This marks an important dealignment with Italy’s partners in the Minsk Group and the EU. Indeed, in 2014, the European Union’s unwillingness to adopt Azerbaijan’s principles on Nagorno-Karabakh contributed to the failure of negotiations over an Association Agreement with the country. Moreover, such principles still lie at the heart of the complex negotiations over a new EU-Azerbaijan partnership agreement, which began in February 2017.

Therefore, Italy has positioned itself as the West’s main political (rather than merely economic) interlocutor with Azerbaijan – an “almost ally”, in Aliyev’s words. It is currently difficult to tell whether the qualitative leap in Italy-Azerbaijan relations will result in any concrete attempt to relaunch negotiations on Nagorno-Karabakh, a move the Italian authorities have repeatedly advocated. It is possible that Rome will be unable to capitalise on its newly assertive approach to the Southern Caucasus. Still, Italy’s effort to strengthen its relationship with Azerbaijan is primarily a political move, one designed to address the lack of credibility that undermines EU policy. Rome has signalled its willingness to break with the past, by adopting Baku’s point of view on the pivotal issue in Azerbaijani foreign policy. In this sense, the joint declaration seems to move the parties in the right direction.

Carlo Frappi is a researcher at the Ca' Foscari University of Venice.

Read the original article on ecfr.eu .