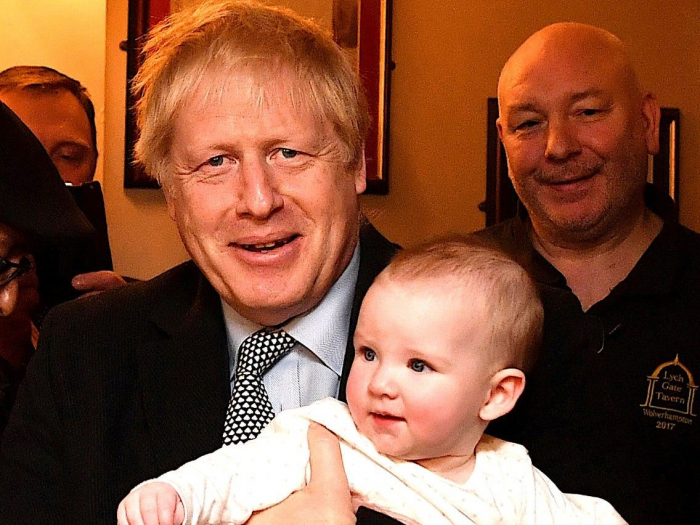 Boris Johnson and his fiancée Carrie Symonds have named their newborn son Wilfred Lawrie Nicholas, partly as a tribute to two of the intensive care doctors who they said had saved the British leader’s life as he battled COVID-19 complications, AzVision.az reports citing Reuters.

Symonds announced the name on Saturday on Instagram beside a picture of her and the boy - who already has thick hair resembling the blond thatch of his father.

Symonds, 32, said Wilfred, who was born on Wednesday, was named after Johnson’s grandfather while Lawrie came from her grandfather.

Nicholas, Symonds said, was a nod to Nick Price and Nick Hart - two doctors who the couple have praised for saving Johnson’s life at St Thomas’ hospital last month.

“I couldn’t be happier,” Symonds said, adding her thanks to the maternity staff of University College London Hospital. “My heart is full.”

Johnson, 55, returned to work on Monday after recuperating from COVID-19, which had left him gravely ill in intensive care at the peak of the coronavirus outbreak. He thanked the doctors at St Thomas’ hospital whom, he said, had “saved my life, no question”.

Symonds, a former public relations executive, also had symptoms of the virus but recovered more swiftly. She had said in February that the baby was due in early summer.

Johnson, who was present at the birth, will take a short period of paternity leave later in the year.

Symonds and Johnson have been living together in Downing Street since he became prime minister in July. They announced in February they were expecting their first child and that they were engaged to be married.


Once dubbed “Bonking Boris” by Britain’s tabloid media, Johnson has had a complicated private life.

He was once sacked from the Conservative Party’s policy team while in opposition for lying about an extra-marital affair. He has been divorced twice and refuses to say how many children he has fathered.

In 2013, when Johnson was mayor of London, appeal court judges ruled that the public had the right to know he had an extra-marital affair with a woman who gave birth to his daughter.

Johnson’s previous marriage was to Marina Wheeler, a lawyer. They had four children together but announced in September 2018 that they had separated. They divorced earlier this year.

Few British leaders have had babies while in office.

Before that, Frances, the wife of John Russell, a 19th-Century Whig and Liberal politician, gave birth to two children in 1848 and 1849 while he was in office.