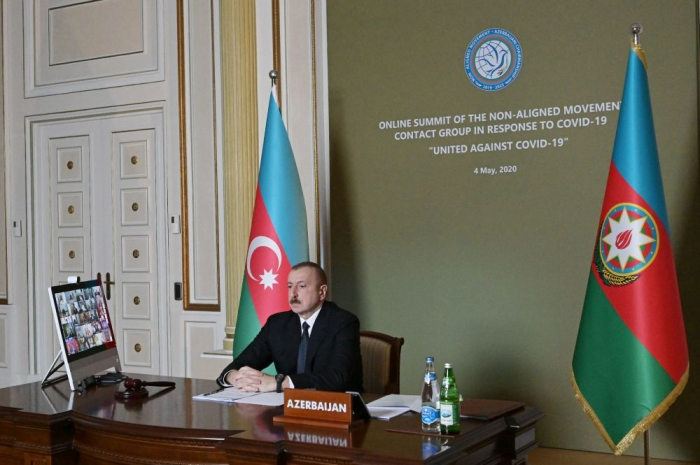 Azerbaijan took prompt and necessary measures to prevent the spread of coronavirus, said Azerbaijan’s President Ilham Aliyev while making an opening speech at the online Summit of the Non-Aligned Movement Contact Group in response to Covid-19, AzVision.az reports.

“Azerbaijan as the country chairing the Non-Aligned Movement, based on the Cartagena document on methodologies adopted by the Movement in 1996, has put forward the initiative to set up a Contact Group to Combat Coronavirus and hold a Summit in this format. It is gratifying that all the member states of the Non-Aligned Movement have unanimously supported this initiative. The Contact Group represents countries from all regional groups based on geographical representation and the principle of voluntary participation. I would like to express my gratitude to the states included in the Contact Group for participating in the Summit. I would also like to thank the President of the UN General Assembly, the Director General of the World Health Organization and Chairman of the African Union Commission, who are participating in this Summit,” said President Ilham Aliyev.

The head of state expressed gratitude to the UN Secretary General, Mr. António Guterres, and the High Representative of the European Union and Vice-President of the European Commission Mr. Josep Borrell for the video message.

“Your Excellencies, on 25-26 October 2019, the 18th Summit of the Non-Aligned Movement was held in Baku. The principles of international law were reflected in the Baku Declaration and the Baku final document adopted at the Summit. At the same time, these documents once again expressed support for the territorial integrity, sovereignty and inviolability of the borders of states enshrined in the Bandung Principles the 65th anniversary of which is celebrated these days. With the unanimous support of 120 member states, Azerbaijan will chair the Non-Aligned Movement for three years. I would like to once again express my gratitude for the great confidence placed in us. When taking over chairmanship, I stated that Azerbaijan would take tangible steps to protect the interests of the participating countries in the international arena and would be guided by the strengthening of solidarity and mutual support,” said President Ilham Aliyev.

The head of state pointed out that Azerbaijan has prepared a comprehensive Action Plan regarding its chairmanship of the Non-Aligned Movement and has begun practical activities.

“The coronavirus pandemic has completely changed the situation in the world, bringing about new realities as a result. Azerbaijan reacted to the new situation quickly and adequately. This is evidenced by the Summit of the Contact Group of the Non-Aligned Movement against Coronavirus initiated by Azerbaijan. The global COVID-19 pandemic adversely affects all countries of the world,” said President Ilham Aliyev.

He noted that no country is insured against it.

“We can defeat COVID-19 with mutual support, without locking ourselves up and by joint efforts only. We appreciate the announcement by UN Secretary-General António Guterres of a global humanitarian response plan to combat coronavirus, the adoption of relevant resolutions in the UN General Assembly and the important role that the World Health Organization plays in the global fight against the pandemic. From the first days of the pandemic, we have been in close contact with the World Health Organization. Based on our appeal, a delegation comprised of leading specialists of the organization visited our country in March and got acquainted with the situation. I would like to express my gratitude to Dr. Tedros Adhanom Ghebreyesus for the support provided to Azerbaijan and for his participation in our Summit. This is the second Summit held on the initiative of Azerbaijan. On 10 April, on my initiative, a Summit of the Cooperation Council of Turkic-Speaking States, an organization Azerbaijan chairs in, was held against COVID-19. The Director-General of the World Health Organization also participated in that Summit and provided valuable recommendations. I would like to note with satisfaction the statement of the Non-Aligned Movement of 9 April entitled “Support for the World Health Organization and its Director General”. On 23 March, the Director-General of the World Health Organization sent me a letter expressing high appreciation of the work done in Azerbaijan,” said the head of state.

President Ilham Aliyev noted that Azerbaijan was recognized as an exemplary country in terms of the measures being taken against the pandemic.

“As a responsible and reliable member of the world community, Azerbaijan has provided voluntary financial assistance in the amount of $5 million to the World Health Organization in support of the global fight against coronavirus. Azerbaijan took prompt and necessary measures to prevent the spread of coronavirus. Following my executive order at the beginning of the year, a Task Force was set up under the Cabinet of Ministers. During the pandemic, the priority for us is the protection of people’s health and their social protection.All public events that were supposed to be held on the territory of the country have been postponed or canceled. From 3 March, teaching at all educational institutions across the country was gradually suspended. A special regime was introduced on 14 March, including a series of measures of social distancing, and on 24 March, a special quarantine regime was introduced,” said the head of state.

He noted that in Azerbaijan, more than 20 hospitals have been allocated for the treatment of patients with coronavirus.

“Laboratory tests, some medical equipment and supplies necessary for the diagnosis and treatment of the virus were delivered to Azerbaijan. There are 23 testing laboratories in Azerbaijan. To date, over 160,000 tests have been administered in the country. To meet domestic needs, the production of protective and other medical supplies was arranged in a short time. Thus, as a result of all these measures, mass infection was prevented. In the last three weeks, there has been a positive trend between the number of infected and those recovering in our country. During the pandemic, we once again witnessed the professionalism of our doctors. Azerbaijan is ready to share its experience in the field of treatment of coronavirus patients with other member states of the Non-Aligned Movement and to carry out cooperation in this area,” said the head of state.

President Ilham Aliyev noted that given the decrease in the rate of the infection and the recovery trend, a plan on a phased exit from the special quarantine regime is being implemented.

“Although the special quarantine regime has been extended until 31 May, a number of restrictions were relaxed on 27 April and 4 May. To ensure economic stability in Azerbaijan, solve the problems associated with employment, ensure macroeconomic and financial stability, a socioeconomic support package in the amount of more than 3.5 billion manats or $ 2 billion was adopted. In general, the state has fully retained the salaries of more than 900,000 people working in the public sector and pays a significant part of the salaries of 690,000 workers in the non-state sector. Along with this, funds in the amount of the subsistence minimum are paid out to 600,000 low-income, unemployed and informally working people for two months,” said the head of state.

He noted that for the social protection of the unemployed, there are plans to create 90,000 public jobs by the end of the year.

“The state will provide a guarantee for 60 percent of new loans issued by banks to entrepreneurs. Until 1 January 2021, taxpayers will be granted tax benefits and tax breaks for areas of activity worst affected by the pandemic. All this is only a part of the steps being taken. In general, our people highly appreciate the measures being taken by the state. Dear colleagues, in the conditions of the pandemic, it is important to maintain open trade between our countries and uninterruptedly carry out international cargo transportation. Azerbaijan has already become one of the important transport and logistical centers of Eurasia, has played a major role in the creation of East-West, North-South and North-West transport corridors connecting dozens of countries. Azerbaijan, as a reliable transit and logistical center responsibly treating its role in the pandemic, provides unhindered transit traffic through its territory. At the same time, it is important to exchange experience among medical specialists, share the experience, information and scientific knowledge gained in the fight against the virus and provide assistance to countries in need. As noted in the proposed Declaration of the Summit, the Working Group of the Non-Aligned Movement will add the humanitarian and medical needs of the participating countries related to the pandemic to the unified database. These data will then be presented to donor countries and international humanitarian organizations for the provision of feasible assistance,” said the head of state.

President Ilham Aliyev noted that to provide support to member countries of the Non-Aligned Movement that are most in need of assistance, Azerbaijan will allocate an additional donation of $5 million to the World Health Organization.

“These funds are intended for those most in need of assistance from the regional groups of Africa, Asia and Latin America. The Non-Aligned Movement, which unites 120 countries, is the largest international organization after the UN General Assembly. During the presidency of Azerbaijan, we intend to jointly enhance the international authority and role of the Non-Aligned Movement in the international arena. Friendship, solidarity and mutual support among countries play a special role. With your consent, we, as member countries of the Non-Aligned Movement and as an example of global solidarity, can propose holding a special session of the General Assembly at the level of heads of state and government, as provided for in the UN Charter, dedicated to the COVID-19 pandemic in the format of a video conference. In this difficult time for all of us, I once again urge all states to maintain friendship, mutual support and solidarity. Thank you for your attention!” said the head of state.