A true leader: An example in the world’s history 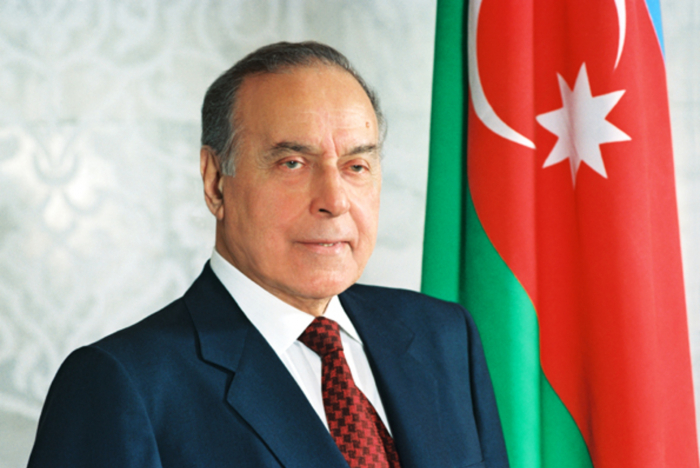 A person who is an influencer in the Caucasus and remains in the hearts of the people. History is evident about the figures who conquered the true essence of leadership and achieved the status in the world’s history as legends.

Heydar Aliyev’s vision, commands, and his incremental influence are reflecting in the contemporary prosperous structure of the Republic of Azerbaijan. This article is dedicated to the 97th Birth Anniversary of “H.E HEYDAR ALIYEV” who entered the history of Azerbaijan as a builder of an independent state. He was born on 10th May 1923 in Nakhchivan.

The article aims to analyze the interpersonal influence that he exercised in the development of his country and the people when the country needed an articulation of a standardized structure for the country. In every sphere, he made remarkable efforts to save Azerbaijan. On the loss of the great leader, the world consolidated with excellent remarks for Heydar Aliyev as he had formulated long term solutions and strategy for Azerbaijan.

The initial struggle of Heydar Aliyev:

From ancient times to the declaration of independence Azerbaijan was in a struggle for its people, land, and resources. Heydar Aliyev was an active figure since 1939 when his career was impeded in World War II. His contributions were in various departments from the Archive Department of the people’s Commissariat of Internal Affairs, as a Head of the General Department of the council of Commissars of Nakhchivan to the Head of the Department of State Committee of Azerbaijan. Heydar Aliyev remained a member of the Supreme Soviets of the USSR for twenty- two years and in Azerbaijan SSR. It was the time when Azerbaijan had to devise a strategy for the survival of an independent nation. In the 1990s, deadly tragedy in Baku, this valorous man demanded punishment to the executors of the crime at Azerbaijan’s representative office in Moscow and left the party for his homeland. The journey for his struggle hasn’t consisted of small steps but it took many years. Meanwhile, the people of Azerbaijan were aware of his position in several important parties and they elected him as a president in 1993.

A period of hope, stability, and peace

Since world war II, Heydar Aliyev had fought for the country as the main issue was stability in the region. After the establishment of Heydar Aliyev Government in Azerbaijan people could gain confidence and optimism. The vision of this inspirational leader was very conspicuous he said

“Our path is clear, the system of government and style of society we are developing in Azerbaijan is based on democratic pluralism, the free market economy, and a secular republic that respect universal human rights.”

Clarity of a vision and building a strong communication mechanism to develop confidence in the nation was well handled by the newly elected president. Civil war and other internal conflicts were destabilizing the peace of the country but in Heydar Aliyev's presidency, significant steps were taken to contain the civil war. Soon after the establishment of the Democratic Republic of Azerbaijan, the president committed to restoring the ancient tradition and values of the country. Without the effective style of his leadership peace efforts were unattainable in Azerbaijan.

The beginning of independence was in danger and had many conflicts because it has sensitive border issues. Armenian’s illegal involvement and breaching the international laws were threatening the peace of newly established Heydar Aliyev state. To build an independent state, stabilizing security in the region and territorial rectitude were focused. Armenian aggression was halting the peace and stability yet the incumbent leader had maintained the control. The national leader made several talks with Armenian leaders to curb the violence, his efforts were to bring peace and stability but the violation of Armenian troops got inflamed, here this is very important to remember that in the era of constant crisis the great leader didn’t lose hope and made the country’s development possible and gained the political stability. Through his intellectual stimulation, he strived hard to make the country’s pillar strong. To manage the situation, he made significant attempts to amplify the foreign policy. He believed in multilateralism for a balanced relationship with the countries.

In Heydar Aliyev's point of view “a country even the greatest one, can develop its economy. Keeping in mind the predicament survival of the economy was a dire need. Leadership is very difficult in an unpleasant environment to organize and solve the problems, though problem-solving is a key. For this purpose, he made personal endeavours to establish a friendly relationship with the USA and Azerbaijan, both the countries also cooperated to fight against terrorism in the region. Meanwhile, his position and struggle had attracted a large volume of foreign investment for economic development. The only way to defend Azerbaijan was through sustainable economic development” oil sector contracts” this strategy had captured international attention as the geostrategic value was considered to the world. The new era of modern, powerful, and development had started. Through mapping out, he planned the best strategy for economic prosperity. The Joint Development and production sharing for the Azeri and Chirag Field and Gunashli Field in the Azerbaijani sector of the Caspian Sea were signed on September 20, 1994, it was the biggest achievement of the Century under the leadership of Heydar Aliyev. Moreover, 11 companies were engaged i.e. AMOCO, BP, McDermott, UNOCAL, SOCAR, Lukoil, Statoil, TPAO, Pennzoil, Ramco, and Delta in this remarkable agreement Azerbaijan, USA, UK, Russia, Turkey, Norway, and Saudi Arabia were partners. This was only possible through the charismatic leadership qualities of Heydar Aliyev and due to the functional operations of the agreement Azerbaijan signed 26 more contracts with 41 companies from 9 countries. This new transition laid the foundation of efficient foreign policy and gradually mitigate the threats. For timely implantation of the provisions of the deals, Heydar Aliyev had ensured the transportation of the oil to international blocs. By the commitment and dedication in late 1997, Azerbaijan exported oil to the black sea by the Baku-Novorossiysk pipeline.

With the determination of the prominent leader, Azerbaijan turned into a stable, powerful, and developed country by maximizing its involvement in the international arena through trade and investment. Not only in the Oil Sector but he made long term strategy in the Gas Sector, in 1996 SOCAR and international oil agencies discovered the gas field, and 1.2 trillion cubic meters’ gas reserves caught attention. All the attempts and efforts of Heydar Aliyev had recovered the economy of Azerbaijan and the incumbent leadership is working for the sustainability tremendously. In his era 165 1:50000 scale, digital maps were developed by the collaboration Japanese government and received 2$ million grant from Swiss SECO company for the land cadaster in the Azerbaijan project. It was important for Azerbaijan to manage border issues and the process was started by Heydar Aliyev in 1996 and 2010 completed the demarcation between Azerbaijan and Russian Federation which was 390 km in length.

Azerbaijan’s modern development is associated with the visionary leader Heydar Aliyev, from political to economic spheres. he contributed and brought new reforms that could curb the crisis and revived its stability. History will never forget the reforms of the national hero, middle and old generations will always praise him for his tireless work for the country

He had served for the interests of people, state, and for their integrity. According to him freedom and independence are all people’s national wealth. He mainly focused on social reforms his first initiative was to give free lands to the citizens of Azerbaijan and it established new significant class of proprietors, formulated new land ploughman relations that aimed to the best utilization of the lands.  Workable decrees were made for land laws, and these lands were also used for the welfare of people of Azerbaijan which improved the financial crisis. In his tenure, agrarian reforms and land reforms for the production outputs were intensified as Heydar Aliyev wanted to revive his country with the best possible resources.

The Leadership is Being Continued by Ilham Aliyev

The world can easily compare the leadership skills of H.E Ilham Aliyev and the national hero Heydar Aliyev, Azerbaijan is fortunate that they couldn’t deprive of the true leadership as H.E Ilham Aliyev is exhibiting his potentials and skills extensively to continue the efforts of the national leader of Azerbaijan. His dynamic approach is deepening its foreign policy, political and socio-economic development. World Economic forum reported 39th position in economic competitiveness. Carrying the vision of Heydar Aliyev, Ilham is intensively highlighting the Armenia issue in the UN Security Council. Concerning leadership qualities, in the testing times leaders should be decisive and should introduce the best contingency plan. In the COVID-19 era, the action plans by Ilham Aliyev are remarkable. Immediate surveillance in the health sector has contained the unexpected pandemic by analyzing the world’s situation Ilham Aliyev leadership was prepared to manage the crisis.  Undoubtedly, the incumbent leadership is for the interest of its people and statehood and in the current crisis giving relaxation in tax and mortgages and all the daily life items are available for the people. To cease the educational loss, a very comprehensive strategy is devised for schools, colleges, and universities. The excellent Leadership of Ilham is appreciable as the rapid growth in socio-economic, political sectors can be seen. The current leadership’s cooperation with the world in COVID-19 is appreciable.

In the end, I would like to highlight the rich culture and Islamic history of Azerbaijan that is remained attracted to the world and the Azerbaijani leadership is successfully maintaining it.

An original article was published on CGSS.