If airlines are suffering, why are some planes so full? - iWONDER 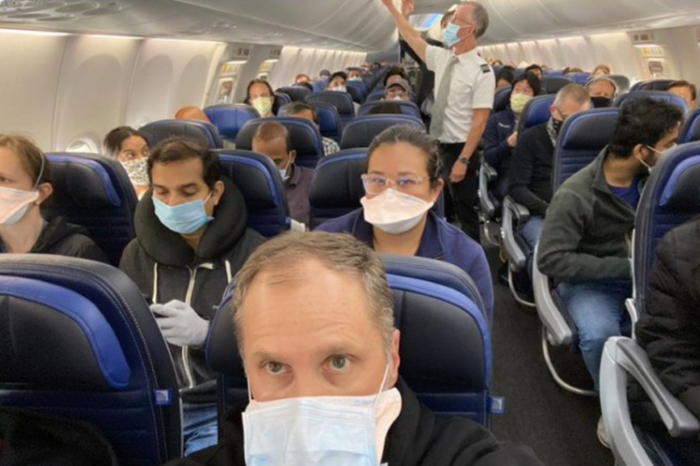 Most flights are virtually empty, but some are still operating near capacity, frustrating travelers who say airlines are not doing enough to keep them safe.

Just a few weeks ago, people were posting photos and stories on social media of virtually empty flights, relishing in personalized service and not having to worry about social distancing.

Now, some travelers are complaining about the opposite, flying on planes that are surprisingly full. They are frustrated that airlines aren’t doing more to space people out or limit the number of passengers.

Even though most flights are generally empty, some continue to fly at or near capacity. Take the United Airlines flight from Newark to San Francisco that Ethan Weiss, a doctor from California, wrote about on Twitter on Saturday in a series of messages that were widely shared.

I guess @united is relaxing their social distancing policy these days? Every seat full on this 737 pic.twitter.com/rqWeoIUPqL

On that flight, only 25 of the 166 available seats were empty, according to United. But the carrier said in a statement that the vast majority of its flights — 85 percent — were less than half full.

Starting next week through June, United said, it will “do our best” to notify customers about a day in advance if they are booked on a flight that is more than 70 percent full. Those with concerns can book a different flight or receive a travel credit.

I thought flights were empty. What gives?

They were and they are. Usually.

In the past seven days, the largest airlines in the United States averaged just 23 passengers on each domestic flight, according to Airlines for America, an industry organization. In the first two months of the year, airlines were averaging 85 to 100 passengers.

Early in the pandemic, there was a glut of empty flights as airlines were surprised by how quickly people decided to cancel trips and forgo new bookings. Flight schedules are set weeks in advance, and airlines didn’t know how many passengers would board planes.

Over time, however, airlines have slashed their schedules. United, for example, cut flights in May by about 90 percent. Delta Air Lines has cut 85 percent of its flights over the three months ending in June.

“That means that people who are on four individual flights are now on one — the single flight that remains,” said Robert Mann, an industry analyst and consultant.

That depends on the airline — and the fine print.

“We’re automatically blocking middle seats to give you enough space on board,” United told customers in an email two weeks ago, a message that Dr. Weiss referred to on his Twitter account.

But United has since clarified its policy. A customer may not be able to select a middle seat, but United could still assign that person one. The company said it could not guarantee that customers would find themselves next to an empty seat.

By comparison, Delta has recently promised to cap seating at 50 percent of its capacity in first class and 60 percent for several other seating categories. That should help ensure plenty of empty seats on each flight.

American Airlines has said it would block half of all middle seats on its planes. Southwest Airlines, which does not assign seats, has resisted making such pronouncements about middle seats, but has said it will temporarily reduce how many passengers it books on every flight.

It’s easy to block middle seats or limit capacity when demand for air travel is very low, but airlines can’t afford to do so forever, at least not without raising prices.

The industry tends to operate on slim profit margins. In North America, an airline breaks even when flights are at least 75 percent full, according to the International Air Transport Association.

If North American airlines were to impose social-distancing measures, airfares would have to increase an estimated 43 percent, from an average of $202 last year to $289, according to the association.

“Eliminating the middle seat will raise costs,” Alexandre de Juniac, the association's chief executive, said last week. “If that can be offset with higher fares, the era of affordable travel will come to an end.”

Who is still flying anyway?

Most people are staying home, but tens of thousands still get on planes every day.

At airport security checkpoints on Sunday, the Transportation Security Administration screened about 8 percent of the 2.4 million people it processed on the same day last year — or about 200,000 travelers and airport and airline employees.

Many of those still flying are visiting loved ones who are ill. Some are traveling to be closer to family after months in isolation. Another group includes medical professionals like Dr. Weiss, who said he was part of a group of 25 nurses and doctors who had gone to New York City to help hospitals struggling with an influx of coronavirus cases. And others are flying for work.

That was the case for David Chou, a health care executive from Kansas City, Mo., who took his first flight in months last week to Houston, where he had just accepted a new job. Mr. Chou was fortunate that only about a dozen passengers were on each of his United flights to and from Houston.

But he was disappointed to find that some of the people weren’t wearing masks, even though United now requires them. It wasn’t a major problem, but it did make him rethink whether he would fly again.

“If volume picks up and people are not practicing social distancing or even wearing masks, I would be hesitant on taking additional flights,” he said.

Niraj Chokshi is a business reporter at The New York Times. He writes about transportation, with a focus on autonomous vehicles, airlines and logistics. He was previously a general assignment reporter at The Times and The Washington Post, where he also reported on trends in state politics.

Read the original article on The New York Times.