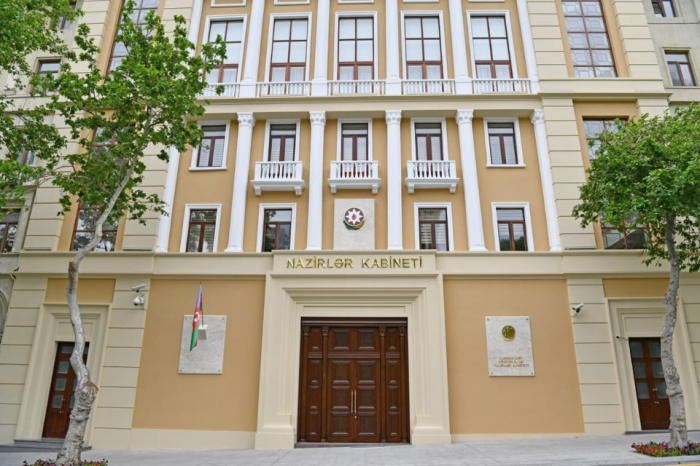 The Azerbaijani Cabinet of Ministers made a decision on additional measures within the special quarantine regime, AzVision.az reports.

In accordance with the document, the following restrictions remain in force till May 31, 2020, during the special quarantine regime introduced in Azerbaijan, and except for the below-mentioned aspects, the activity in other spheres and the services sector is allowed:

- suspension of entry to and exit from the territory of the country by vehicles and planes, except for the cargo transportation;

- a ban on entry to and exit from Baku, Sumgayit, Ganja, Lankaran and the Absheron district except for special vehicles, including ambulances, emergency and rescue vehicles, as well as a ban on passenger transportation by vehicles and planes between other cities and districts of the country.

- the limitation of the number of employees in the state institutions in Baku, Sumgayit, Ganja, Lankaran and Absheron region by the Azerbaijani Cabinet of Ministers;

- suspension of receiving the groups of people and individuals in the state institutions except for ASAN and DOST service centers;

- a ban on organizing and holding commemorations in ceremonial halls, tents and other enclosed halls except for funerals;

- a ban on holding all public events, including cultural and sports events;

- a ban on the activity of the facilities organizing the events, including a ban on holding birthday parties, weddings, engagement and other similar events in the houses of clients or in other places;


- a ban on rendering collective tutoring services (including rendering such services at home);

- a ban on mass gathering of citizens (more than 10 people) in public places, including streets, boulevards, parks and other places;

- termination of activity of cultural facilities, as well as cinemas, theaters, gyms except for museums and exhibitions;

- a ban on hookah smoking at public catering facilities;

- suspension of customer service in restaurants, cafes, tea houses in Baku, Sumgayit, Ganja, Lankaran and Absheron region, as well as in all catering facilities from 18:00 to 08:00 (GMT+4);

- a ban for relatives to visit the patients undergoing medical treatment in medical institutions;

- rendering of massage and bath services.