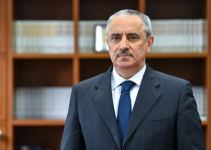 The new appointment has been made at the Azerbaijani Ministry of Economy.

Sahir Mammadkhanov has been appointed advisor to the minister. The corresponding order was signed by Minister of Economy Mikayil Jabbarov.

Mammadkhanov worked as an inspector in the Main State Tax Inspectorate of the Republic of Azerbaijan in 1993, as well as an inspector and head of the department in 1994-1999.

He worked as deputy head of the Department of Work with Large Taxpayers in 1999, then as the head of the Main Directorate from 1999 through 2001.

Mammadkhanov headed the special department of the tax service under the Ministry of Taxes from 2001 through 2009.