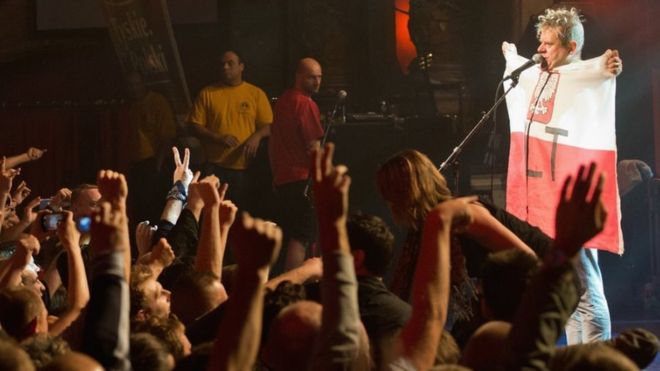 Polish public radio has been accused of censoring an anti-government song that topped the charts and was then removed from the station's website.

Kazik's Your Pain is Better than Mine is widely seen as criticising the head of Poland's ruling nationalist party.

The host of the Trojka chart show has resigned along with two other DJs.

The station director has claimed the chart was fixed, but MPs from the ruling party as well as the opposition have condemned the song's removal.

What's the song about?

The song's theme is grieving and the lockdown of the nation's cemeteries during the coronavirus outbreak.

When cemeteries were closed, Mr Kaczynski still visited the Warsaw grave of his mother and the graves of victims of a Russian air disaster in Smolensk in which his twin brother, President Lech Kaczynski, was killed.

By Friday, Kazik's song had topped Poland's renowned chart on Radio Three, highlighting a sense of one law for ordinary Poles and another for the ruling party's leader.

Cemeteries closed as a result of the events of recent weeks, recent events. I look at the chains, I wipe away my tear, just like you, just like you. The gate opens, I can't believe my eyes. Perhaps things are different after all. I run over, your heavies shout stop, because your pain is better than mine.

Why was the song removed?

Shortly after the chart show was broadcast, internet links and news about the veteran singer's hit were disabled on the website of Radio Three, known as Trojka.

The chart is voted on by Trojka listeners and station boss Wojciech Kowalczewski insisted it had been manipulated: "We already know for sure that this song did not win. It was manually moved to number one. In other words, it was fixed for sure," he complained.

But a journalist on the chart show, Bartosz Gil, said there was no fix and he accused Mr Kowalczewski of asking the station's music director "to do something with Kazik".

Accusations of censorship came amid a backdrop of Mr Kaczynski's party being accused of turning Poland's publicly funded media into mouthpieces for the government.

What reaction has there been?

Programme host Marek Niedzwiecki, who has been presenting the chart show for more than three decades, resigned along with two other well known DJs.

Journalists demonstrated in silence outside Radio Three's building and many Polish musicians said they no longer wanted the station to play their songs, our correspondent reports.

Polish Radio Three began under communism and broadcasts a broad variety of music to a big national audience.

Singer-songwriter Dawid Podsiadlo said Trojka had supported him and his work right from the start, but if politics were more important than music on the station and some of the worst practices from the communist period returned, then he did not think his songs had a home there.

Politicians from both the opposition and ruling party described the song's removal of the song as unjustified censorship.

Deputy Prime Minister Jadwiga Emilewicz said "artistic freedom should never be fettered in any way, even when the artist has a different opinion". Culture Minister Piotr Glinski said singers sometimes said shocking and stupid things but removing a song was even more shocking.

But Prime Minister Mateusz Morawiecki complained on his Facebook page that there were more important things to talk about, such as coronavirus and the centenary of the birth of late Pope John Paul II.

"Let me be very clear. Yes, visiting the graves and monuments of the victims of the Smolensk disaster was, is and will be our duty. Even during the epidemic," he wrote.