BERNAMA: Azerbaijan continues to progress and develop despite past difficulties 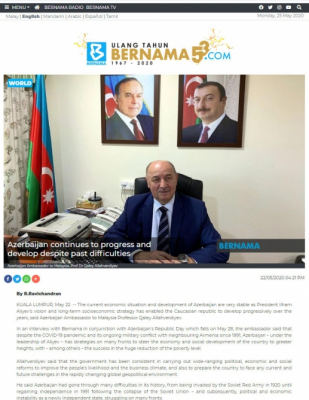 The Malaysian national news agency BERNAMA has published an article on 28 May-the Republic Day of Azerbaijan.

Headlined “Azerbaijan continues to progress and develop despite past difficulties”, the article is based on the interview with the Azerbaijani Ambassador to Malaysia Qaley Allahverdiyev.

The article reads: “The current economic situation and development of Azerbaijan are very stable as President Ilham Aliyev’s vision and long-term socioeconomic strategy has enabled the Caucasian republic to develop progressively over the years, said Azerbaijani Ambassador to Malaysia Professor Qaley Allahverdiyev.

In an interview with Bernama in conjunction with Azerbaijan's Republic Day which falls on May 28, the ambassador said that despite the COVID-19 pandemic and its ongoing military conflict with neighbouring Armenia since 1991, Azerbaijan – under the leadership of Aliyev – has strategies on many fronts to steer the economy and social development of the country to greater heights, with – among others – the success in the huge reduction of the poverty level.

Allahverdiyev said that the government has been consistent in carrying out wide-ranging political, economic and social reforms to improve the people's livelihood and the business climate, and also to prepare the country to face any current and future challenges in the rapidly changing global geopolitical environment.

He said Azerbaijan had gone through many difficulties in its history, from being invaded by the Soviet Red Army in 1920 until regaining independence in 1991 following the collapse of the Soviet Union – and subsequently, political and economic instability as a newly independent state, struggling on many fronts.

But all these problems were gradually addressed by national leader Heydar Aliyev in the 1990s through his visionary leadership for the betterment of the nation and the people.

"The war following the invasion of neighbouring Armenia resulted in deep crisis in Azerbaijan. There was real chaos in the country. In October 1993, Heydar Aliyev was elected as the President of Azerbaijan. He succeeded to introduce Azerbaijan to the world in a short time," he said, adding that Heydar Aliyev chose the path of establishing a democratic state in Azerbaijan, where, in 1995, the Constitution of the Republic of Azerbaijan was adopted and new progressive laws were adopted.

Allahverdiyev said since then, there was no turning back as Heydar Aliyev, despite the many difficulties and challenges at that time, had laid the foundation of the country for the upliftment of political and socio-economic development; and today, the country is reaping the fruits of Heydar Aliyev’s foresighted policies – something being continued by Ilham Aliyev to place Azerbaijan as an important global player in a complex geopolitical world.

"After the establishment of sociopolitical stability as a result of the systematic and appropriate policy, the decline in production and fall in the economy was gradually overcome, and a new stage in the economic development of Azerbaijan began. The macroeconomic stability, increase in industrial production and other spheres, and the initial results of economic reforms were the incarnation (results) of the steps Azerbaijan has taken in the path of the market economy," said Allahverdiyev.

Citing Petronas' investment of more than US$4 billion to date in Azerbaijan, Allahverdiyev said that in recent years, Azerbaijan has increasingly become an attractive country for foreign investment, and the country of some 10 million people is today an important regional transportation hub and a strategically important nation for many good reasons.

While pointing out that it was in Azerbaijan - in 1848 - that the world’s first oil well was already drilled and Azerbaijan was among the first oil-producing countries in the world, the government – under the leadership of current President Aliyev – have realized many years ago on the importance of economic diversification, which has resulted in more focus on the agriculture sector, the manufacturing sector, service sector and developing new technology, as well as turning the country into a regional transportation hub to accelerate the growth of non-oil and non-gas sector.

Allahverdiyev said in the 1990s – after Azerbaijan suffered a deep crisis in political, economic and military spheres following the collapse of the Soviet Union – Heydar Aliyev used the oil factor in the solution of such difficult problems, and developed the oil strategy of Azerbaijan based on a long-term national development programme aimed at drawing the country`s energy resources to the economic turnover by cooperating with big foreign companies on the principle of mutual benefit.

Allahverdiyev said that in general, over the past 16 years, the economy of Azerbaijan has grown 3.4 times.

"This is a record high on a global scale. At the same time, the revenues received are distributed fairly, where an important point to mention is that 16 years ago, almost 50 per cent of the population of Azerbaijan lived in poverty. Today, the poverty rate is at 4.8 per cent," he pointed out.

Citing the International Finance Corporation (IFC), he said the corporation has described Azerbaijan as already a donor country, and these opportunities will grow in the future.

According to the website of Azerbaijan International Development Agency (AIDA) of the Ministry of Foreign Affairs, the dynamic economic development of Azerbaijan over the last decade has enabled a former recipient of foreign aid to become itself a donor country.

It further said that up till now, more than 90 countries have benefited from the international aid provided by Azerbaijan, and the geography of the aid-receiving countries is expanding.

The ‘Doing Business’ report of the World Bank ranks Azerbaijan among 20 top reforming countries in terms of the measures taken in the field of improving the business environment, said Allahverdiyev.

According to Associate Professor Anar Valiyev in an article posted on the website of the European Council on Foreign Relations, Azerbaijan's geographical position makes it a key territory for regional integration projects, and the country is at the centre of three major integration initiatives – the European Union, the Eurasian Economic Union (EEU) and the One Belt, One Road (OBOR) initiative by China.

"Azerbaijan has great transit opportunities as a bridge between Europe and Asia. Thus, the roads leading from East to West and West to South that bypass Azerbaijan, substantial road infrastructure of the country, as well as the newly built Baku International Sea Port, transform the country into a strategic logistical hub of the region,” Allahverdiyev further explained.

Allahverdiyev pointed out that in recent years, large-scale infrastructure projects have been implemented in Azerbaijan. The country has expanded its external economic ties as a result of the newly-built Baku International Sea Port, modern airports, construction of internationally important roads, East-West and North-South transport corridors.

He noted that the construction of the Baku-Tbilisi-Kars railway further increases the importance of Azerbaijan as a transit country. This is the shortest route linking Asia and Europe and it is expected to transport 30 million tonnes of cargo each year.

Touching further on Baku-Kuala Lumpur ties, Allahverdiyev said that today both nations enjoy friendly relations and Azerbaijan views Malaysia as an important partner not only in the ASEAN region, but also the Islamic world as a whole.

Allahverdiyev also noted the participation of Malaysian Prime Minister Tan Sri Muhyiddin Yassin on May 4 in the Online Summit Level Meeting of the Non-Aligned Movement (NAM) Contact Group in Response to COVID-19, chaired by President Aliyev who is the current Chairman of NAM.

The ambassador, who is also the Dean of Diplomatic Corps in Malaysia, said that both Azerbaijan and Malaysia have huge potential in further enhancing bilateral cooperation, especially in the area of economy and trade which is yet to be fully explored for the benefit of the peoples of the two countries.

Going back to Azerbaijan's history which is not only tumultuous at times but also the glorious era, he pointed out that following the Independence Declaration adopted on May 28, 1918, (23 months before the Soviet invasion), the Azerbaijan Democratic Republic (ADR) was established, marking the first parliamentary republic in the Muslim East and among Turkic peoples – in other words, a democratic republic created for the first time in the Muslim world.

Allahverdiyev explained that this development brought many historical achievements; for the first time in the Muslim world, women had electoral rights; the creation of the Azerbaijani telegraph agency - an independent news agency of an independent state - and the diplomatic ties of the young republic was expanded.”