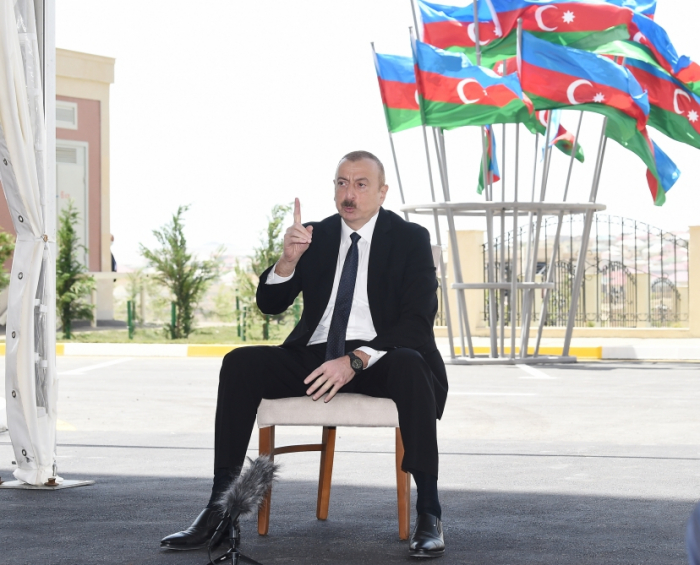 "I am fully convinced that Azerbaijan will restore its territorial integrity. There are many reasons to say so - our military strength and we have shown it", President Ilham Aliyev said at the inauguration of Gobu Park-3 residential complex for the internally displaced persons in Garadagh district, Baku, Azvision.az reports.

The head of state recalled that thousands of hectares of land were liberated from occupiers in 2016 and 2018 as a result of successful military operations: "In the example of the village of Jojuq Marjanli, we see what work will be done in other lands to be liberated from occupation. We rebuilt Jojug Marjanli in just one year after a successful military victory, and the IDPs returned to their homeland. Sometimes people claim that some IDPs may not return after the lands have been liberated. But I am sure that all the IDPs will return to their native lands, just like the IDPs from Jabrayil. They lived for many years in other places, including in Baku, but when the opportunity arose, they even lined up to return to their homeland as soon as possible. At the same time, Shikharkh settlement was liberated from occupation. Now a large town has been built there as well. It is a historical site of Azerbaijan located in the territory of the former Nagorno-Karabakh Autonomous Region, a large town was built in the liberated area. We will carry out restoration work in all other occupied territories. Azerbaijan will ensure its sovereignty".

"The position of international organizations on the conflict strongly supports the territorial integrity of our country. The recent so-called "presidential elections" in Nagorno-Karabakh have shown this once again. Nobody has recognized that so-called "president". The world's leading countries have made a public statement on the issue. The co-chairs of the OSCE Minsk Group - the United States, France, Russia, as well as the European Union, the Non-Aligned Movement, the Organization of Islamic Cooperation, the European Parliament and others - have stated that they do not recognize these elections and Nagorno Karabakh is part of Azerbaijan. Therefore, international law, our military power, as well as our economic superiority, will certainly play a key role in the liberation of our lands. Negotiations should be conducted, but now in the world, as you see, the power factor comes to the fore. Some countries, even those with great democratic traditions, sometimes pursue their own interests ignoring international law. At the expense of what? At the expense of power. That is why army building is always in the forefront of my activity as a President. Today, we have created a powerful army that can accomplish any task. Of course, all these positive factors, as well as the demographic situation, will continue to give us an advantage. The settlement of the Nagorno-Karabakh conflict is a historic issue, and we must resolve this issue once and for all".

The President noted that Azerbaijan's territorial integrity must be fully restored. This is a step-by-step solution that is being discussed and negotiated today.

"Although the Armenian leadership tries to deny this in its official populist speeches, in fact, a gradual solution of this issue is being discussed within the negotiations. Armenia, as usual, misleads its people and wants to deceive the mediators. There is no solution other than a step-by-step solution. What does that mean? In the first stage, part of the lands is liberated from occupation. There can be no other option. But what I am saying is that this can only be a step-by-step approach. Our goal, our main goal is to ensure our sovereignty completely and once and for all, and we will do it. We just need to be stronger, properly assess the time and geopolitical situation to solve the problem. This is my opinion and I know that the Azerbaijani people support my position. I have said this many times and I want to say again that the Nagorno-Karabakh issue can be resolved only within the territorial integrity of our country. I want to say again that Nagorno-Karabakh is Azerbaijan and an exclamation mark", the President stated.