Why astronauts get nervous on the launchpad - iWonder 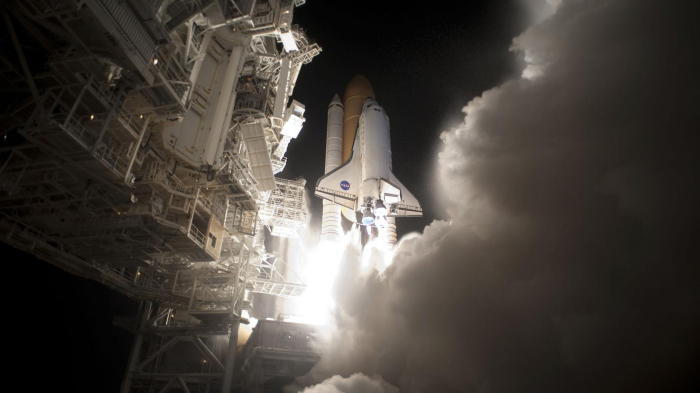 Space launches don’t always run smoothly, as the delays to the inaugural Crew Dragon launch showed. What is it like sitting in a capsule attached to a rocket when things don't go to plan?

It is 26 June  1984. Mission Specialist Mike Mullane lies in his couch in the cockpit of Space Shuttle Discovery. This will be the 12th flight in the Space Shuttle programme but Discovery’s and Mullane’s first. The upgraded spacecraft is showroom fresh – the surfaces shiny, free of scratches and scuff marks, the displays polished and controls untouched.

Mullane, the veteran of 134 US Air Force combat missions in Vietnam, has been selected as a member of the first group of Shuttle recruits. He has trained for six years for this mission. But he has barely slept or eaten any breakfast. He has also taken the precaution of buying three separate life insurance policies.

With the previous day’s launch attempt scrubbed during the last 20 minutes of countdown because of a computer glitch, all the crew are on edge as the seconds tick by. Only one of the six astronauts, commander Hank Hartsfield, has flown before. The rest – including Judy Resnik, preparing to become the second American woman in space – have yet to earn their gold astronaut pins.

“Two emotions gripped me in that cockpit,” Mullane tells me. “One was fear – you do fear for your life – but the other was boundless joy because it’s a lifetime quest for astronauts to fly to space.”

In his revealing and sometimes hilariously honest autobiography, Mullane writes that if the Shuttle exploded, he wanted it to be when they were higher than 50 miles so he’d die an official astronaut.

Mullane’s heart is racing as the countdown reaches 10 seconds and a thousand tonnes of propellent a second flood into the rocket combustion chambers. At six, the engines roar into life; Discovery is straining at the bolts holding it to the launchpad.

All that remains are the two solid rocket boosters – giant fireworks strapped to the side of the rocket. Once they ignite there is no going back. The astronauts are well aware that if anything goes wrong, the Shuttle has no ejector seats or other means of escape to fling the crew clear of an inferno.

“You’ve got that fear factor of being on a rocket with no viable escape system, but you also have the confidence that there are a lot of people that have done everything humanly possible to make sure the machine is safe.”

Then, the master alarm sounds.

The astronauts’ families are watching anxiously from the roof of the launch control centre some five kilometres away. There is a bright flash as the pad appears to be consumed by flames.

In the cockpit, the vibrations stop as the engines fall silent. But what about the solid rockets? If they light now, the spacecraft will be torn apart.

“I don’t know how many seconds later it was, but you could hear [over the communications loop], that there was a fire at the base of the vehicle,” Mullane says. “That got our attention – we were sitting on a rocket containing four million pounds of propellant.”

With concerns in launch control that there might be an invisible hydrogen fire running up the side of the vehicle, the crew are told to sit tight and wait for instructions. The Shuttle is doused in a deluge of water. Eventually, the crew are able to leave the spacecraft, returning to the ground. Drenched, disgruntled – but careful not to show it in front of the cameras – and ready to fly another day.

Having waited six years for a flight, Mullane was prepared to wait a little longer. It isn’t until the fourth launch attempt three months later that Discovery finally leaves the Earth and makes the eight-minute journey to orbit.

“When the hold-down bolts blow and the solid rockets ignite, there’s intense noise and vibration,” says Mullane. “And as the g-forces build, it gets rougher and shockwaves form as you punch through the air. Then, after the boosters separate, it’s just so soundless and smooth.”

But even that eventual maiden flight of Discovery was a close-run thing. What the crew didn’t know was that as the two solid rocket boosters burned, they began to fail. Hot gases had started to penetrate the joints between the rocket segments, burning away at the rubber seals. A few minutes more and the boosters would have blown apart, destroying the spacecraft. Just 18 months later the same failure killed seven astronauts, including Judy Resnik, in the Challenger disaster.

An incident during Mullane’s second mission in 1988 revealed another flaw in the Space Shuttle design. Shortly after launch, the tip of the nose cone from one of the boosters came away, smashing into spacecraft’s fuselage. In orbit, mission control assured the crew the problem was minor. Back on the ground after the mission, however, the engineers were shocked by the severity of the damage. If the nosecone had hit in a slightly different place, Mullane’s crew would have perished. In 2003 seven astronauts died when Space Shuttle Columbia burnt up on re-entry after similar damage to its heat-resistant tiles.

The Space Shuttle had been conceived for launches every few months to provide routine access to orbit. The Challenger and Columbia disasters demonstrated there was nothing routine about blasting into space and that every launch was the equivalent of an experimental test flight. The tragedies also revealed problems with Nasa’s safety and management processes, based on the misguided assumption that the Shuttle system was fundamentally sound.

Once in orbit, and mission after mission, the Shuttle operated near-perfectly – a remarkable, versatile and, frankly, beautiful spaceplane. It enabled the launch and servicing of Hubble, the assembly of the International Space Station and countless space firsts. But the combination of a Shuttle strapped to a giant fuel tank and two solid boosters with no means of escape if something went wrong was a fatal design flaw, making every launch all the more perilous.

Now, nine years after the last Shuttle flight, US astronauts once again went through the frustration of delays, as they prepared to launch in an American spacecraft from the US.

But SpaceX’s Dragon spacecraft is a very different machine to the Shuttle. Look beyond the futuristic touchscreen displays and innovative construction materials and the fundamental design goes back to the earliest days of spaceflight. A capsule mounted on top of a large multi-stage liquid-fuelled rocket. Unlike the Shuttle, testing of the Dragon and Falcon launcher has been far more rigorous. An escape system is at the heart of the design, with rockets to blast the crew capsule away from a failure or explosion.

Nevertheless, the launch of Crew Dragon was still a test flight. As Shuttle veterans and former test pilots, the crew – astronauts Bob Behnken and Doug Hurley – will be only too aware of the risks of launch and frustration of delays. Hurley flew the last Shuttle mission and they will be well prepared for the mix of terror and joy of launch in a glistening new spacecraft.

“I know I would feel much more comfortable on top of a Falcon rocket in a Dragon capsule,” says Mullane. “Still, I'm sure they're going to share very close to the same sensation that any astronaut in any period of the history of the space program has faced – everybody feels pretty close to the same way, regardless of what rockets are fired.”

Mullane flew his final mission in 1990 and retired from Nasa shortly afterwards. But he wishes he was back in the cockpit and could experience, once again, the terror and the “boundless joy” of launch. “I envy the hell out of those guys that are getting to take that flight!”