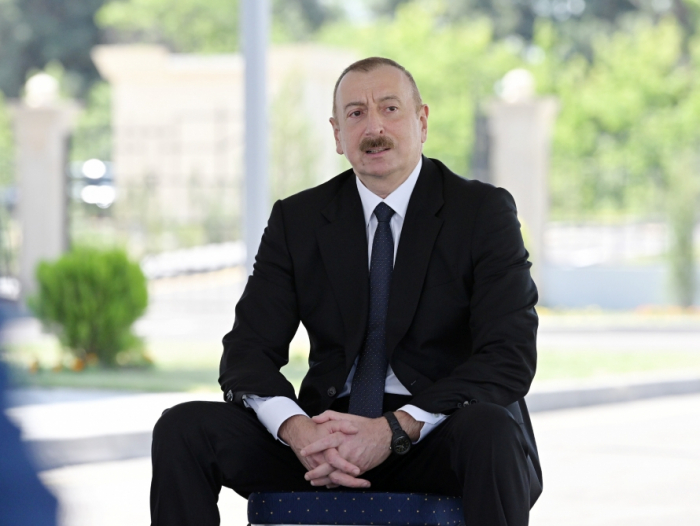 "We are gathering strength, we must be stronger and we will be", President of the Republic of Azerbaijan Ilham Aliyev said at the inauguration of Tartar Olympic Sports Complex on June 3, AzVision.az reports.

The head of state said that the names of historical cities and villages of Azerbaijan in the territory of present-day Armenia have been changed.

"When these names have been changed? Therefore, when we say that the history of present-day Armenia was created on the land of Azerbaijan, we are telling the truth. We are well aware that Armenians were relocated to our land, including present-day Armenia, in the early 19th century, after the Russo-Persian war. The people of Tartar are well aware, and the people of Azerbaijan know, that in 1978, a monument was erected in one of the villages in the former Nagorno-Karabakh Autonomous Region to commemorate the 150th anniversary of the arrival of Armenians in the region. Subtract 150 years from 1978, so they arrived in 1828. As soon as the war broke out, the monument was destroyed, but its ruins remain, and now anyone can visit and see it. It is necessary to show those pictures, too. They are immigrants and they have been relocated to our lands from Eastern Anatolia and Iran. This process began in the early 19th century and expanded later. When I say that Irevan is our ancient land, I am telling the truth. Everyone knows that. If this was not the case, then why did the Democratic Republic of Azerbaijan decide to hand over Irevan to Armenia? And when? One day after the declaration of independence. It must not be forgotten and it must not be forgiven. Let everyone know. It seems that from now on Armenia would give up its other claims against Azerbaijan. But did he give up? No! Our ancient land Zangazur was also given to Armenia. With the surrender of Zangazur, the great Turkic world was divided geographically, and the main part of Azerbaijan was deprived of the border with Turkey. Our border with Turkey is only in the Nakhchivan Autonomous Republic. Did the Armenians give up their claims after Irevan was handed over to them?"

"Nagorno-Karabakh conflict... Territorial claims... Did they give up? Who can justify that Irevan, our ancient city built by Azerbaijanis, be given to Armenia? Who can justify that the Democratic Republic of Azerbaijan did the right thing? Therefore, there is no room for mythology. All young people should know the history as it is. I must also say that that event took place in 1918. But for the first time, I raised the issue of this historical fact. No one has raised it before me. I raised this issue from different tribunes and said that this is our city, our land. Everyone should know the history."

As for the conflict, there is only one way to resolve it, and that is to restore the territorial integrity of our country. There is no other way. Azerbaijan will restore its territorial integrity. I said recently that we are gathering strength, we must be stronger and we will be. At the same time, the geopolitical situation must create conditions for the success of all our steps. I have said that Karabakh is Azerbaijan and I want to repeat it again: Karabakh and its constituent Nagorno-Karabakh are Azerbaijan and an exclamation mark. The whole Azerbaijani society and people support my position", said President Ilham Aliyev.