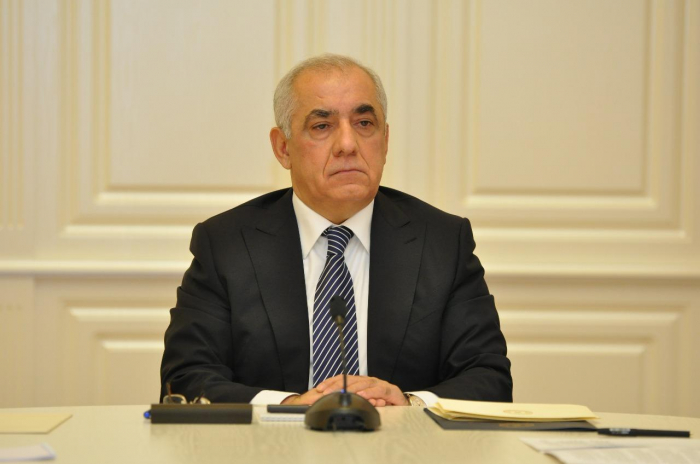 Azerbaijani Prime Minister, Head of the Operational Headquarters under the Cabinet of Ministers Ali Asadov appealed to the population in connection with a sharp increase in the number of cases of coronavirus infection.

“To prevent the coronavirus infection that was spreading in the world and Azerbaijan since February, the Azerbaijani government has taken and is taking urgent and decisive measures from the very beginning,” Asadov added.

"The Operational Headquarters was created under the Cabinet of Ministers to rapidly take the preventive and urgent measures upon the Azerbaijani president’s order dated February 27, 2020,” the prime minister said.

“The Operational Headquarters announced the special quarantine regime in Azerbaijan from March 24 through April 20 in accordance with the Law on Sanitary and Epidemiological Health,” Asadov said. “The mass events were canceled, land borders of the country were closed, movement among the country’s cities and districts was stopped.”

“To strengthen the fight against coronavirus, the special quarantine regime was gradually tightened,” the prime minister added. “During this period, the necessary measures were taken in all spheres to prevent the threat of the spread of the epidemic in Azerbaijan in accordance with the president’s instructions. Such measures are also being taken now.”

“The main goal of all the steps which are being taken is to protect the health and lives of our citizens,” Asadov said. “The taken measures have yielded positive results and have been indicated in the statistical indicators. Proceeding from the recommendations of doctors and taking into account the statistical data, the Operational Headquarters has begun to gradually mitigate the rules of the quarantine regime since April 27.”

“During the quarantine period, the main requirement of doctors and other officials is the compliance with sanitary-epidemiological and hygienic rules,” the prime minister said. “Most of the people, appreciating the conducted work, showed solidarity and initially complied with these recommendations and requirements.”

“But, unfortunately, I would like to stress that during implementation of mitigating measures recently, most of our citizens did not comply with the established rules and recommendations on self-isolation,” Asadov said. “As a result, the number of infected people has risen sharply in recent days.”

Proceeding from this fact and in accordance with the appeal of the medical headquarters, the Operational Headquarters has made the following decision today.

The quarantine regime will be tightened in Azerbaijan’s Baku, Sumgayit, Ganja, Lankaran cities and Absheron region due to an increase in the number of cases of coronavirus infection from 00:00 (GMT+4) on June 6 through 06:00 (GMT+4) on June 8.

“The Operational Headquarters under the Cabinet of Ministers made a corresponding decision,” Asadov added. “The compliance with the requirements specified in the decision is mandatory. If the number of cases of infection in the country’s other cities increases, the quarantine regime will be also tightened there.”

“The Interior Ministry will monitor the process of the implementation of the decision,” Asadov said. “In conclusion, I would like to stress once again that the goal of all taken measures is to protect the health and life of citizens."