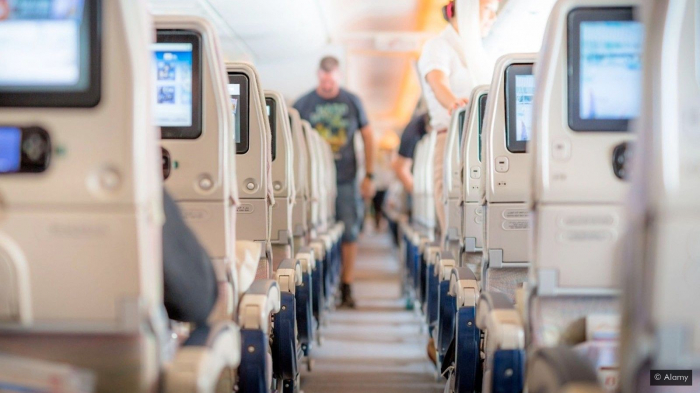 In virus terms, boarding is one of the riskiest parts of flying. How can airlines keep passengers apart – and still take off on time?

If you’ve ever queued on a crowded walkway, sandwiched tightly between two strangers, and thought: ‘There must be a better way to board a plane’, here’s the good news: You’re right. The bad news? Most airlines simply don’t care.

That, at least, has long been the case. Airlines generally board passengers in an order that reflects their status with the airline and how much they’ve spent on the ticket, rather than where they’re actually sitting, leading to painful bottlenecks on board. It’s a balancing act: quicker, more efficient boarding saves the airline money and time, but rewarding loyalty – even at the cost of other passengers’ time or comfort – may earn them more in the long run.

But the coronavirus could upend this. All of a sudden, airlines and airports must scramble for new solutions to reduce the risk of virus transmission, while boarding passengers as quickly as possible.

From a coronavirus perspective, boarding is one of the riskiest parts of taking a flight. The airport terminal itself gives passengers room to spread out, while on board the plane, you’re surprisingly safe, providing the engine is running. Cabin air is entirely refreshed every five minutes or so and filtered using hospital-grade HEPA filters, which remove more than 99% of viruses and bacteria attached to droplets. But during boarding, passengers are in close contact with one another, often in poorly ventilated spaces like the plane’s aisle or the walkway, also known as a jet bridge.

Right now, it’s not such an issue. Many planes are flying well short of full capacity, while some are leaving middle seats empty to allow social distancing. But that’s not a viable financial option for the future, making the pressure to get boarding right huge. In the short term, more efficient boarding should keep passengers safe, while ideally saving carriers money. In the long run, it could change the way we board planes for good.

Under normal circumstances, airlines opt for controlled disorder. First up to board are higher-status flyers or anyone in need of extra assistance, followed by block after block of those in cattle class. As these groups are not generally ordered by row, it’s particularly inefficient, not to mention stressful. Traffic jams are inevitable as passengers line up to get onto the plane, let one another into their seats or lift bags into the overhead locker.

In the Covid-19 world, those traffic jams risk far more than just irritation. Even with masks, packing people close together on an unventilated jet bridge is needlessly risky, especially if there’s a better way.

Michael Schultz, an engineer at Dresden University’s Institute of Logistics and Aviation in Germany, has been working on precisely this problem for a new paper. He and co-author Jörg Fuchte of German aerospace company Diehl Aviation hope to publish it in coming weeks.

In the normal boarding procedure, a passenger might come into close contact with five or six others. Introducing social distancing measures, where passengers remain about five feet apart, reduces that number down to one or two – not bad, but still too many. Changing the boarding procedure to board window seat passengers at the back first, for instance, however, can reduce the number of so-called “critical contacts” even further.

The key, after running more than 100,000 simulations? Opening both the back and front door. “You can then separate the stream into two,” he says. Even if there is someone on the flight who poses a risk of infection, “at least one half – the front or the back – will never get in contact with that person.” At that point, “critical contact” drops down to “substantially below one, even with normal carry-on luggage”.

Jet bridges normally only allow access to either the front or back half of the plane, making it impossible to split the crowd in half. But sending passengers outside the terminal to board, by walking straight out onto the tarmac by the gate, as some budget airlines do already, solves this problem and more, by taking them into a low-risk, open-air environment where transmission is less likely.

Other solutions are a little more radical. So-called “dynamic” seating would assign passengers their seat when they scanned their boarding card at the gate – a bit like getting a table at a crowded restaurant. You might have the option to request a window or an aisle seat, or to board as a family, but the rest would be down to how the plane had filled up so far. Because an algorithm would decide where you sat, there would be little incentive to shove your way to the front of the line. “I think this way could be the future,” he says.

Arguably the fastest solution for boarding a plane is known as the Steffen method. Its inventor, Jason Steffen, normally has little to do with aviation. As an astrophysicist at the University of Nevada, Las Vegas, he spends most of his time grappling with outer space – specifically, the planets that orbit distant stars. But about 10 years ago, he became consumed with the problem of how best to board passengers, eventually sitting down and “solving it” in a matter of weeks.

His solution is fiddly at best. Passengers board in waves, starting with people in window seats on one side of the plane, two rows apart – think 30A, then 28A, then 26A and so on. The next “wave” is passengers on the other side – 30F, 28F, 26F – followed by odd-numbered window seats, even-numbered then odd-numbered middle seats, and finally aisle seats.

There’s reason to consider this method in a coronavirus context, because it moves passengers through the system very quickly. “When passengers are stopped, they're not stopped next to someone and the line inside the jetway would clear faster,” says Steffen.

But there are practical concerns. Though in field tests Steffen’s method has proven almost twice as fast as regular boarding, organising those waves is still a challenge. Airlines such as the US budget carrier Southwest have managed to sort passengers into groups at the gate, but it requires co-operation from passengers. “You need lots of preparation for that process,” says Michael Schmidt, a Germany-based engineer currently working at Munich Airport. “Because everyone has to be lined up and you don’t board with the person who's sitting next to you, if a family is travelling together, it's kind of tough.”

Schmidt is well acquainted with the boarding conundrum. While at Bauhaus, the Airbus group company that explores the future of aviation, he helped build a simulator to test the effects of everything from widening the aisle to introducing new seating concepts on passenger flow. Some of that work is now coming in useful as he tries to figure out the safest possible way for passengers to move through the terminals at Munich. “It’s challenging because we don't actually have any data, because passenger numbers are quite limited,” he says.

From an airport perspective, there are a few solutions that don’t require overhauling the whole system, inefficient as it is. Lufthansa is currently testing out biometric boarding, where scanners “match your identity with your face”, he says. “Then you could go through the checkpoint, without taking out your boarding pass or your mobile phone.” It’s faster and helps reduce contact between ground staff and passengers, though privacy experts cite concerns about how this biometric data would be stored or used.

While Schultz’s suggestions allow passengers to have normal amounts of hand luggage, incentivising passengers to go without could result in fewer gate-side check-ins, less time bickering over overhead locker space and a faster process overall. And, when it comes to coronavirus, it means less huffing and puffing as passengers lift their bags, further reducing transmission rate.

Some German airports including Munich and Frankfurt have already taken steps to encourage passengers to downsize, says Schmidt: “If you just have one small item, there’s a fast lane [at security].” Meanwhile, the Indian government is reportedly considering banning hand luggage altogether.

Many of these proposals are actually improvements on the sluggish status quo. It begs the question of whether, in a hopefully not-too-distant post-vaccine era, they might become the new normal, even once the risk of transmission has gone down.

At this early stage, many airlines are still testing out new approaches. In April, the US airline Delta began boarding flights by row from back to front, with passengers asked to stay seated until their row is announced. (Premium class passengers can still board whenever they want.) United has also done away with boarding by large groups, instead admitting passengers in small groups to minimise crowding.

One possibility, says Seth Kaplan, an aviation analyst with Kaplan Research, is that months of social distancing might make us more likely to avoid situations where we’re within spitting distance of strangers. For years, some airlines have bused first-class passengers straight to the plane, allowing them to bypass the gate altogether. If business or premium economy class passengers now also want to board as late as possible, and instead stay in the lounge, the old block boarding style may no longer make sense.

Ultimately, when it comes to aviation, “every crisis changes the industry”, he says. “So you can't have the biggest crisis ever without also having some of the biggest changes ever.”