Pashinyan exposes himself at the Eastern Partnership Summit 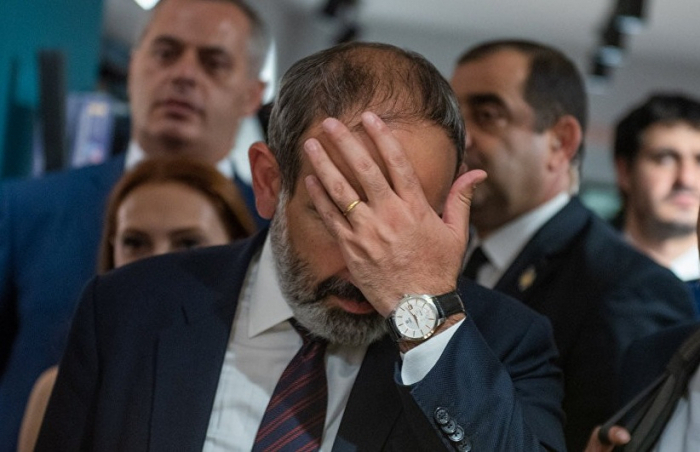 The following points from his speech clearly prove this.

Firstly, in his speech, Armenian PM used the internationally accepted word "Nagorno-Karabakh" while reading it off a piece of a paper in English. However,  he uses the word "Artsakh"  while delivering his speech in Armenian.

It is clear that Nikol Pashinyan uses the term "Artsakh", which is not recognized by the international community, in his speeches in Armenian that addressed only to local people. His speech at the summit also showed his "English language proficiency level". Although he read his pre-prepared speech in English on paper, he could not express his thoughts in that language. The escape way was to speak in Armenian. In his speech, the Armenian Prime Minister said that they had received 92 million euros in aid from the European Union to meet the urgent needs in combat against the coronavirus and mitigate the impact. In his speech, the President of Azerbaijan stressed that our country has allocated $ 10 million in voluntary financial aid to the World Health Organization to fight the pandemic. At the same time, Azerbaijan has provided humanitarian aid to 29 countries and continues its aid. This is a solid fact that demonstrates a deep gap in the economic sphere, as in all areas in Armenia in comparison with Azerbaijan. It is no coincidence that the WHO calls Azerbaijan an exemplary country in the fight against coronavirus, appreciates Azerbaijan's aid to other countries, while Armenia simply begs for money to fight the virus.

Pashinyan said another lie in his speech. He presented the final decision of the European Court of Human Rights entirely in a falsified form, claiming that the decision reflected Azerbaijan's racist policy against Armenians in its territory, and expressed dissatisfaction with the extradition of Ramil Safarov to Azerbaijan and his recognition as a hero in his country. However, Pashinyan should know that it is unacceptable to distort the decision of the ECHR which does not make any charges against Azerbaijan. The court's decision did not state that Azerbaijan had any state responsibility on charges regarding racism. The decision states that the incident was committed on the basis of individual behaviour. Therefore, Pashinyan, who accused Azerbaijan of racism in regard to the decision of the ECHR, once again exposed himself to the international community in his speech based on lies and deception.