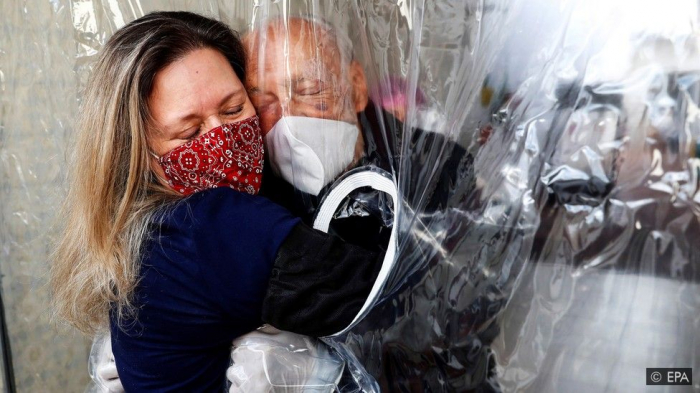 For many people, these past few months in lockdown might be the longest they have ever gone without physical contact with a friend – and it’s having an effect on our wellbeing.

“I can't do any sort of work without touching someone. It is part of my profession,” says Jo Adenuga, a London-based makeup artist. Since the end of March, when the UK went into lockdown, beauty professionals like her have had to stop working, and as yet there is no plan for them to return to work.

“I love being able to chit-chat with my clients. And being close to them is so important. I am right in front of their face, touching their face, chatting. I took a drastic hit mentally when the work stopped,” she says. “Psychologically the first two weeks I was mentally down.”

Adenuga says that the loss of income is not the sole reason for feeling down. She is used to the seasonality of her work; most of her clients are brides and weddings peak at various times of the year. There are times in quiet seasons when Adenuga will have less paid work, so instead she will pay for models whose photographs she uses in her portfolio as part of marketing on Instagram.

“I miss it so much,” says Adenuga. “My husband is like, ‘Hell no, don’t come here with that brush’.”

Beauty is not the only industry which has been restricted by social distancing rules. Professionals from personal trainers to tailors have found it difficult to work under the guidelines. Some have been able to continue to work using video calls. “One of the first things I did when I realised the world is going virtual; I did virtual consultation,” says Adenuga. “Since I cannot come to you to do your makeup I am going to teach you how to do it yourself. This went on for two months, but it is not the same, I am sorry. I want to reach out through the phone – through the computer screen.”

Adenuga is describing “skin hunger”: a longing to touch or be touched in a social way. She is like so many others who have realised that life became a lot less intimate in lockdown. Makeup artist Mary Greenwell recently posted a video of herself working with a friend with whom she is in a closed “bubble”. “I am blessed to be able to touch and be a part of the family,” she wrote. “This was the first person I have touched since lockdown.”

Cue an outpouring from her followers. “Isn’t it funny that human touch – I don’t mean in a romantic or family love sense – but just that human touch we experience on an everyday basis is so important,” wrote one.

“I agree,” replied another. “So many elderly folk crave human touch and their one only human touch ever is their hair stylist. It’s an important part of being human, isn’t it? I think of older people who live alone and have no one.”

Why is it that we crave to be close to others? And why is human touch so hard to replace?

Kory Floyd, a communication professor at the University of Arizona, is an expert on affection deprivation. Skin hunger, or “touch deprivation”, is one aspect of this, though Floyd has also researched how the elderly or isolated are deprived in other ways, like not having someone to talk to.

The current situation is unique in that those people who previously felt isolated still feel alone while people who probably never felt isolated before are being deprived of affection in one specific way – touch. While social contact can be maintained on the phone or via video calls, we cannot, or should not, be close to one another. And the effects are noticeable.

Floyd says that we feel skin hunger when we notice a discrepancy between the amount of touch we want and the amount that we receive. It means that the signals are very similar to regular hunger – we only notice it when we’re not getting enough of what we want.

“People are missing touch often without realising it,” says Floyd. “They feel a general sense of ill ease. In part because they haven’t had a hug in three weeks, they’ve not touched grandkids or been around their parents or spouse.”

Clearly, some people have greater needs than others. The amount of touch we desire is personal, though Floyd says there are very few people who will need absolutely none at all.

Floyd says there is a normal distribution of desire to be touched across the population, meaning most people are somewhere between needing a lot or needing a little. “Some people are touch aversive or avoidant so minimal amounts are preferable,” he says. “Some people need a great deal of touch to feel like they are thriving.”

Traditionally we might think of the elderly as the most lonely group, but “often their circumstances have not changed significantly”, says Floyd. “They might have changed somewhat, they might not see grandchildren – they might be looking at their family members through a glass window. By and large there is a good proportion whose circumstances have not changed substantially.” The people who are most put out by lockdown are those who are used to being around their peers on a daily basis.
A woman hugs her 82-year-old father through a "hug curtain", in Sao Paulo, Brazil, one of the worst affected regions in the world (Credit: EPA)
Substitutes for human touch come in various forms from techie, internet-enabled prosthetics, called telehaptics, to human-sized, warming pillows. These are imperfect substitutes. In the case of telehaptics, where the touch might be controlled by a loved one remotely, the feelings might be good, but they are not equal to real human touch from that person.

Before the spread of the virus, people who were feeling under touched might choose to go to “cuddle parties”, where strangers can agree to touch each other affectionately in a controlled environment. Again, the solution is imperfect. While this touch may be real, Floyd questions the authenticity of it.

“As long as you are not reacting negatively to touch, it is not invasive or threatening, then some is better than none at all, and touch from a loved one is better still,” he says. “It is better to be touched by a cuddle professional or massage therapist – that is better than nothing at all. When touch is coupled with a positive emotional connection with other people, that magnifies the benefit for our wellness.”

To this end, even exchanging touch with a pet can be hugely beneficial. Unlike with cuddle parties, the affection of a pet has some genuineness – they are getting something out of it too, rather than it being a transaction between two strangers. Animal shelters around the world have reported spikes in adoption rates during lockdown, and data suggests, at least in the US, that shelters are running out of animals to put up for adoption.

Some public health officials in the US have called people to no longer shake hands when businesses return to work. It has caused a lot of speculation about whether we will ever go back to normal.

For Adenuga, getting back to normal is likely to involve wearing gloves and a face shield when she can finally see clients again. She is puzzled how she can work properly in gloves, when so much of her work requires physically touching her clients’ skin, but thinks she might find a way around it.

The bigger concern for her is how to form those important bonds with her clients while covering her face. “I am working with someone who is inviting me to be a part of her special day – one of the best days of her life. The morning of her wedding she is happy, we have a little chit-chat. A mask is going to kill the mood.”

“Most times the brides are excited but I get ones that are nervous and I use a calming effect, calming her nerves, saying the right things, not allowing her to get nervous. I am not sure how that is going to work with a mask. It literally just occurred to me now.”

Are close interactions going to be a thing of the past? “My speculation is that we will very quickly return to normal, whether we should or not is another question,” says Floyd. “But we have been in pandemics before. Those ways of interacting have not gone by the wayside.”

“They are so normal, comforting, it is so important to our wellbeing that I think that there will be a period of caution where we think twice, but my speculation is that we will get beyond that and get back to normal pretty quickly.”

For now, Adenuga is restricted to posting throwback photos on Instagram and reliving her work in memory. “I long to work again,” she says. “One day.”