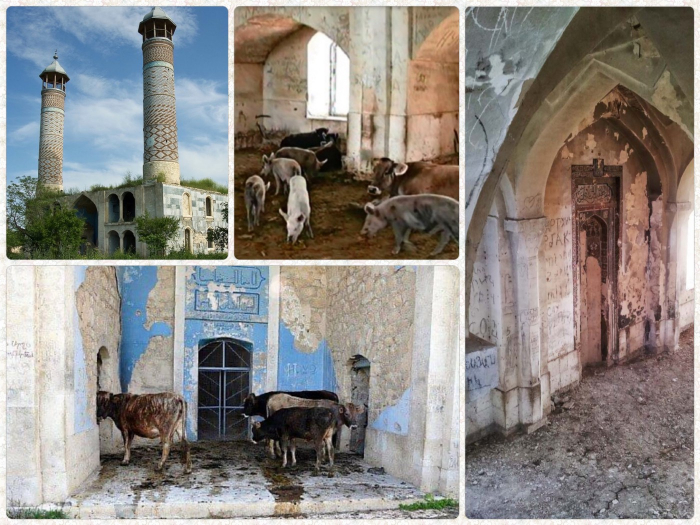 Warfare is always disastrous, yet when it includes war crimes, such as targeting civillians, bulldozing entire towns or committing ‘cultural genocide,’ it becomes particularly catastrophic for generations to come. Over the last decade, Daesh in Iraq and Syria has taught us the peril enacted on generations of victims. Yet despite the atrocious example Daesh has left, perhaps there is something worse — such as when the perpetrators of horrific crimes deny their responsibility and try to discredit those they have brutally victimized.

This very scenario is playing out in the Caucasus, with reverberations in the US. In the early 1990s, Armenia invaded, occupied and ethnically cleansed the neighboring Azerbaijan’s Karabakh region. Almost a million Azerbaijani civilians were expelled from Karabakh and Armenia. Though the U.N. Security Council repeatedly condemned this occupation and demanded the withdrawal of Armenian troops, Armenia defied these calls, continuing to hold around 20 percent of Azerbaijan’s sovereign territory under illegal military occupation. Almost three decades later, Azerbaijani forcibly displaced are still not allowed by Armenia to return to their homes and lands.

Now when the world starts to question Armenia’s actions more and more, Armenian special interests in the U.S. attempt to whitewash Armenia’s crimes against hundreds of thousands of innocent civilians, and to deflect international pressure to withdraw from the occupied areas. We see such cover-up attempts in the U.S. Congress and various state legislatures across the nation, where bills and resolutions are introduced to camouflage the illegality of Armenia’s behavior. Or when the Armenian lobby organizes junkets for some Congresspersons, who illegally visit the occupied areas of Azerbaijan and sing praises to Armenia, fully supporting the unlawful military occupation and brutal ethnic cleansing, — an appalling move that contradicts the longstanding U.S. foreign policy and disregards the plight of a million Azerbaijani forcibly displaced. It is especially egregious considering that such attempts of camouflage serve to enable the most horrifying result of the conflict — the “cultural genocide”. And the facts of this “genocide” are abundant. Evidence such as the nearly decimated Azerbaijani town of Shusha and its famed Mamayi Mosque, which was transformed into an Armenian church, its commemorative Islamic plaque erased and replaced with an Armenian cross. Or the ancient Azerbaijani city of Agdam, once a thriving home to 50,000 Azerbaijanis, totally obliterated by Armenian troops — to the extent that it is now called the “Hiroshima of the Caucasus” or “Ghost Town”. After Agdam’s occupation and obliteration, the city’s only surviving building was its Juma Mosque, which was intentionally converted into a barn for pigs and cows.

The plundering, desecration and destruction of Azerbaijani cultural heritage in Armenia and the occupied Karabakh region includes 4,500 historical, religious and cultural monuments. Perhaps most horrendous is that the majority of this “cultural genocide” occurred after armed hostilities ended with a 1994 ceasefire agreement. 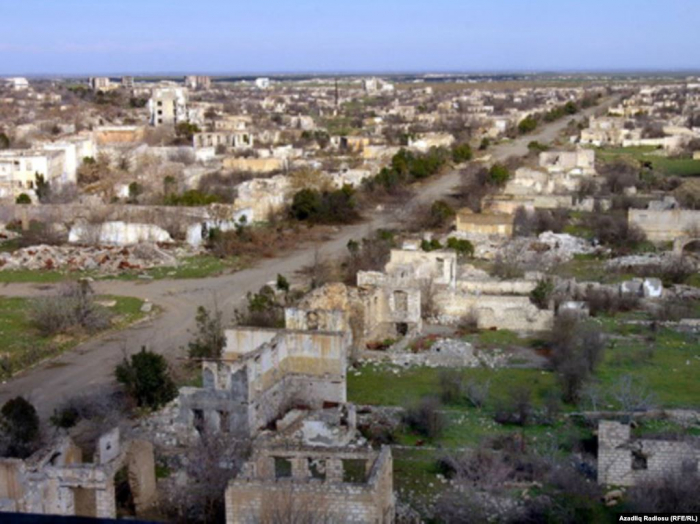 Ruins of once Azerbaijani-populated city of Agdam after its occupation by Armenia. Razed to the ground and looted by the Armenian troops, it is now called the “Hiroshima of the Caucasus” or “Ghost Town”. 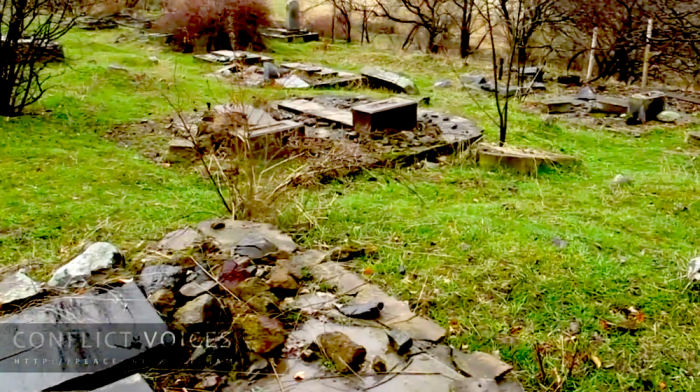 The scope of this destruction could make even Daesh jealous.

Moreover, Armenia has illegally resettled tens of thousands of Armenians in the occupied Karabakh territory, in houses formerly owned by Azerbaijanis, as confirmed by a European Court of Human Rights ruling. Occupied houses of Azerbaijanis are now offered as vacation rentals on Airbnb. Items of Azerbaijani cultural heritage, plundered by Armenian troops from museums in Karabakh, frequently end up at auctions such as Sotheby’s. Almost all once Azerbaijani-populated towns, villages, and even streets, have been renamed after the occupation, and Armenianized, in a vicious attempt to erase any traces of Azerbaijanis’ age-old presence in Karabakh.

And all these facts are concealed under the barrage of misinformation provided by the Armenian special interests.

So in this light there is something worse than committing massacres and destroying thousands of years of history — that is denying that these travesties ever took place. It is as if to say that the over 1 million Azerbaijani forcibly displaced, the tens of thousands that lost their lives to Armenian bullets, and their cultural heritage never existed. 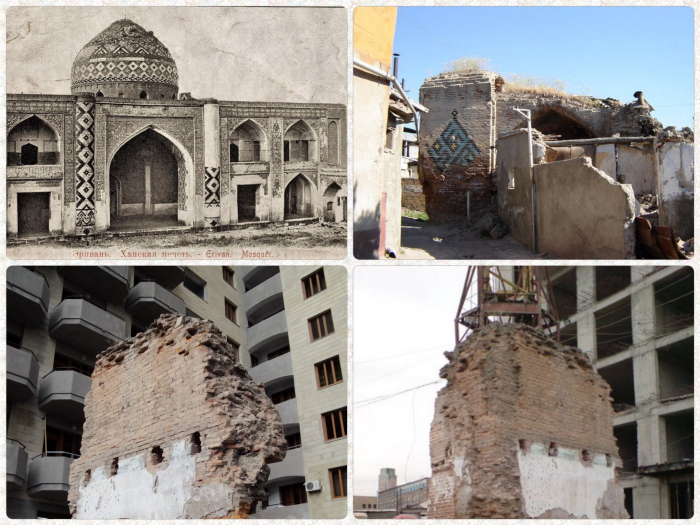 Azerbaijani Abbas Mirza Mosque (built in 1810) in Yerevan, Armenia. Totally destroyed and replaced with a high-rise. 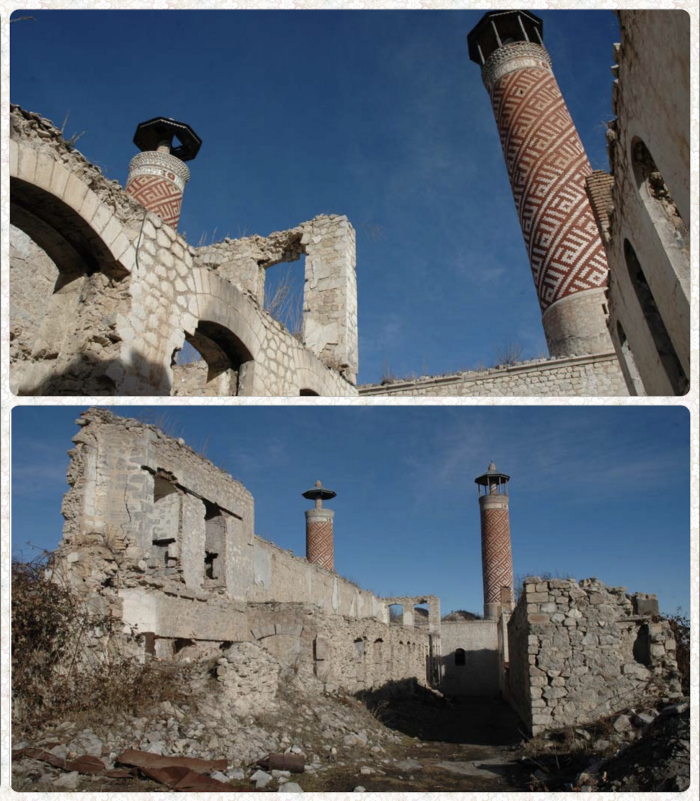 Ashaghi Govhar Agha Mosque in the Armenian-occupied city of Shusha. Destroyed and desecrated after the occupation of this Azerbaijani city by Armenia in 1992.