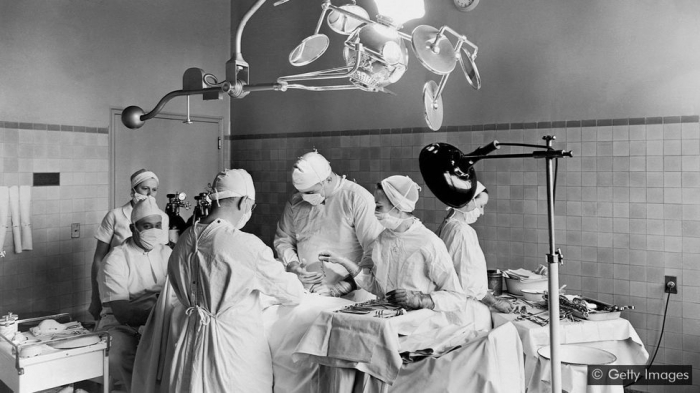 Less than 70 years ago, it was almost impossible to safely operate on a beating heart. That is, until a handful of surgeons solved the challenge – and paved the way for life-saving techniques.

It is 2 September 1952 at University Hospital in Minneapolis, Minnesota. A thin and frail-looking five-year-old child, Jacqueline Johnson, is wheeled into an operating theatre. Diagnosed with a hole between the upper chambers of her heart, her parents have been told she has just months to live. They have consented to experimental surgery but there is no guarantee Jacqueline will come out alive.

After putting the child to sleep, the surgical team carefully wrap her in blankets ribbed with tubing, tying the ends together with ribbons. They attach the blankets to a flow of cold water and monitor Jacqueline’s temperature as it drops to 28ºC (F) – nine degrees below normal – and her heartbeat slows.

In theory – backed by experiments on animals – this state of hypothermia will reduce the girl’s oxygen requirement. It should buy surgeon John Lewis enough time to clamp off her heart, cut into it, identify the defect, sew-up the hole and close the wound.

He will have just six minutes – two more than if he operated at the body’s normal temperature. Any delay and Jacqueline’s brain and vital organs will be starved of oxygen and she will likely suffer severe brain damage or die.

“This was state of the art,” says Paul Iaizzo, professor of surgery at the University of Minnesota. The world-renowned heart research laboratory he oversees is three floors below the operating room where Jacqueline’s surgery took place.

“There are stories in history of people drowning in cold water and hours later they can resuscitate them, so they knew that deep hypothermia was protective.”

Opening Jacqueline’s chest, Lewis clamps-off the blood vessels around her heart. They start the clock. Lewis makes the first incision. Jacqueline’s heart continues to slowly beat. With no blood, it’s easy to see the defect. Lewis stitches it shut, checking with a squirt of saline solution that the hole is closed. Finally, he sews-up the slit he’s made in the heart wall, loosens the ligatures and completes the surgery. Jacqueline’s heart continues to beat.

Gentry lifting the girl into a bath of warm water – actually a cattle trough bought from a farm supplies catalogue – her body temperature begins to return to normal. Eleven days later, she leaves hospital, her life transformed.

A hole in the heart had previously been considered a death sentence. In fact, cardiac surgery had been off-limits for many surgeons. Before the 1950s, the only successful heart surgery had involved stitching-up stab and gun wounds or removing fragments of shrapnel.

Battlefield surgeons during World War Two developed many new techniques but they had to operate on beating hearts with blood still pumping through them. This limited what was possible, was messy, traumatic and often led to significant blood loss.

Hypothermia had the potential to save thousands of young lives. But the short operating window meant it was only suitable for relatively straightforward procedures. Surgeons needed a means of isolating the heart, while still keeping oxygenated blood circulating, to buy them more time.

The answer came from one of the junior surgeons that assisted Lewis, Walton Lillehei, and an operation that ranks as one of the most extraordinary and potentially dangerous in the entire history of surgery.

Lillehei proposed using a donor to keep the patient alive during surgery. The idea was to pump oxygenated blood from a healthy person, with matching blood-type, across to the patient and return deoxygenated blood back to the donor. He called the procedure cross-circulation. But it wasn’t well received by the surgical community who feared that if something went wrong, such as a bubble of air getting into the system, it could kill both patient and donor.

“There were a whole bunch of ethical concerns about this,” says Iaizzo. “It was the only surgery where you could have 200% mortality and there were a lot of naysayers who thought Lillehei was crazy. The courage it took the surgeons to do this, and the patients to agree, is pretty remarkable.”

Lillehei’s head of department, Owen Wangensteen, gave the go-ahead and at 6am on 26 March 1954, a one-year-old patient and his father were wheeled into the operating theatre. Both were anaesthetised and a plastic tube was connected from the father’s leg, through a pump typically used in food manufacturing to move substances like mayonnaise around factories, to the boy’s chest.

The operation was a success. Tragically, the boy died a few days later from pneumonia but the next patient, a three-year-old, survived – living until he was 67. On his death, he donated his body back to the University of Minnesota, and Iaizzo has been able to study the heart and even see Lillehei’s stitching.

Lillehei would go on to perform 45 cross-circulation operations. Twenty-eight of the children survived. The poor odds took a heavy emotional toll on the surgical team but, without the surgery, all of their patients almost certainly would have died.

“They were faced with a no-win situation,” says cardiologist and council member of the Royal College of Surgeons of England Farah Bhatti. “Children were dying ­– it must have been an incredible responsibility – you had to have big shoulders.”

With growing concerns about the welfare of the donors, a less risky way of temporarily oxygenating and pumping blood around the body was needed. Since the 1930s, surgeon John Gibbon had been leading efforts to develop a heart-lung machine.

Bhatti. “It’s the mainstay of the operations we do.”

In May 1953, Gibbon mended a hole in the heart of an 18-year-old woman while the machine kept his patient alive for a total of 26 minutes. But it was touch and go. Frothing with blood, the contraption – around the size of a chest freezer – practically exploded during the operation. Gibbon’s next three procedures were unsuccessful, and he decided to call a halt.

Others – including Lillehei – carried on the development of heart-lung machines, working with engineers to gradually perfect the technology until it became safer and more reliable.

Lillehei also helped develop the first pacemakers – adapted from instructions for a transistorised metronome printed in the magazine Practical Electronics. The devices were often attached to young patients after surgery to maintain their heartbeat (although the adjustment dials had to be taped over to prevent the children fiddling with them).

In 1955, another obstacle to successful surgery was overcome when British surgeon Denis Melrose found a way of temporarily stopping the heart. He used a dose of potassium chloride, and restarted it using electricity. Now, for the first time, surgeons could operate on a still heart.

Together, these innovations transformed cardiac surgery. By the end of the decade, the vast majority of patients in hospitals around the world survived major heart operations.

Bhatti, who today typically carries out four operations a week, likens heart surgery to a ballet, involving dozens of people including the surgeons, nurses, the anaesthetist and perfusionist – the expert who operates the heart-lung machine.

But some procedures are still remarkably similar to the operation that saved the life of Jacqueline Johnson.

During operations to repair the main blood vessel leading from the heart, the aorta, surgeons still use hypothermia.

“You've got ice packs on the heart and head and we’ve taken the blood out of the body but we don’t return any blood so you’ve got no circulation,” explains Bhatti. “If you looked at that patient, they would look like they weren't alive.”

The technique gives surgeons 30 minutes before they need to restore blood flow.

“You have to work very swiftly, but meticulously, because you can't reach that area once the heart lung machine's back,” she says. “That’s when theatre is silent, nobody talks, that’s when you need your focus, for everyone to know what they’re doing.”

Despite the surgical advances over the past 70 years, it’s unlikely that open heart surgery will ever become routine. “I still get excited when I look and hold a heart – it’s a great honour,” Bhatti says. “When the patient’s heart starts beating again when you finished your surgery, it's a really great feeling.”