Azerbaijanis sent letter of appreciation to the Dutch Police 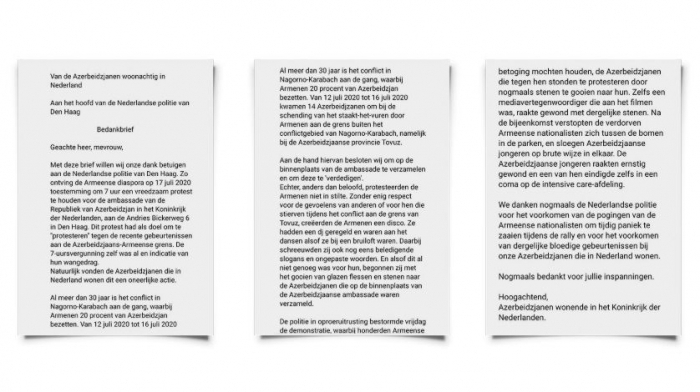 Azerbaijanis living in the Kingdom of the Netherlands have sent a letter of appreciation to the police in the Dutch city of The Hague, AzVision.az reports citing the State Committee on Work with Diaspora of the Republic of Azerbaijan.

It was noted that the attempt of the Armenian community to hold a 7-hour rally in front of the Azerbaijani Embassy in the Netherlands on July 17 was of provocative nature. They wanted to provoke the Azerbaijani community, which protested against the occupation of 20 percent of Azerbaijani territories by Armenians and the killing of 14 people by Armenian armed forces violating the ceasefire on the Azerbaijani border located far from Karabakh.

Therefore, our Azerbaijani compatriots gathered in front of the embassy to prevent the provocation, protesting against Armenian attempts to hide the truth and misinform the public.

Breaking their promises on holding a peaceful rally, Armenian chanted insulting slogans and organized a disco at the rally disrespecting people and Azerbaijani martyrs' spirits killed on the border.

Our compatriots noted that the incidents in Belgium were not repeated in the Netherlands thanks to the timely intervention of the Dutch police.