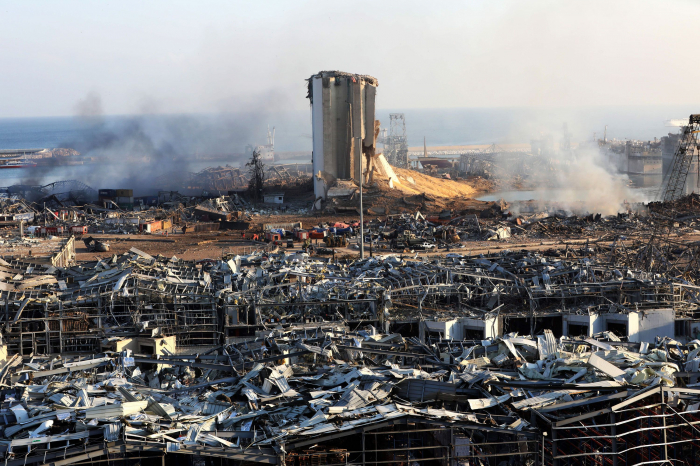 US President Donald Trump has said he plans to join the call.

Officials estimate the blast at the warehouse, which stored 2,000 tonnes of ammonium nitrate, caused up to $15 billion (£11.5bn) in damage.

On Saturday several thousand people took to the streets, with police firing tear gas at stone-throwing protesters and some demonstrators storming government ministries.

In a televised address, Lebanese PM Hassan Diab said he would ask for early elections as a way out of the crisis. The issue will be discussed in cabinet on Monday.

Lebanon was already mired in a deep economic crisis and struggling to tackle the coronavirus pandemic before the explosion tore through Beirut.

An anti-government protest movement erupted last October, fuelled by the financial situation and a collapsing currency.

French President Emmanuel Macron visited Beirut on Thursday, and announced he wanted to co-ordinate international aid for the country.

A statement from France's presidential palace says Sunday's conference "will aim to mobilize Lebanon's main international partners and to organize and co-ordinate emergency support from the international community".

Representatives from European Union member states, China, Russia, Egypt, Jordan and the UK will all take part, with many others invited to attend.

In a series of tweets, President Trump said he had discussed the "catastrophic event" in Beirut with Mr Macron and would himself join the call.

"Everyone wants to help!" he wrote.

A number of countries have already pledged millions of dollars worth of aid and sent ships, health workers and materiel to assist Beirut.

But UN agencies have called for more help and warned about the massive challenge ahead. Many homes are without water or electricity, there are growing worries about food shortages, and cases of Covid-19 are spiking in the country - an additional challenge for hospitals which are already overwhelmed.

"The needs are immediate and they are huge," Unicef spokeswoman Marixie Mercado told reporters in Geneva on Friday.