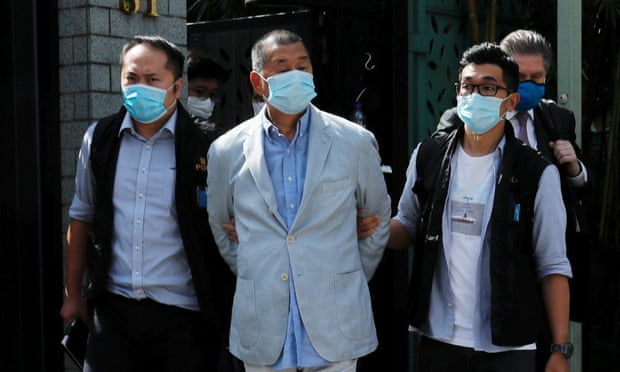 The 71-year-old founder of news outlet Apple Daily, who is already facing several other charges over the organisation and promotion of protests last year, was detained on Monday morning.

Later Mark Simon, Lai’s top aide, tweeted that police were executing a search warrant on the newsroom floor of Apple Daily’s offices. A live stream showed dozens of police at the Apple Daily headquarters carrying hundreds of plastic evidence tubs. Staff filmed plain clothed officers walking through the newsroom, casually rifling through piles of paper on people’s desk. Later, Lai himself was brought in, appearing to be handcuffed, and taken into an office.

Hong Kong police confirmed seven people aged 39 to 72 had been arrested on suspicion of collusion with foreign forces against national security, and conspiracy to commit fraud. “The police operation is still ongoing and does not rule out more arrests,” the force said.

Lai’s arrest is the most high profile under the new law since it was implemented. It comes after the US enacted sanctions against senior Hong Kong officials, including the chief executive, Carrie Lam, and comes amid deepening concern over Hong Kong’s democratic decline.

Lai’s arrest and the raid on Apple Daily is the first time the law has been used against media in Hong Kong, which has historically had a high level of press freedom. Last month the New York Times announced it was moving part of its Hong Kong bureau to South Korea, and several outlets have complained of foreign journalist visas not being renewed. On Monday the Standard news website reported the immigration department had established a national security unit to vet “sensitive” visa applications, including from journalists.

If Lai is charged with foreign collusion offences, he faces potential sentences of three to 10 years in prison, or up to life for an offence “of a grave nature”.

Lai’s company, Next Media, is the publisher of Apple Daily, Hong Kong’s largest pro-democracy daily. Activist Eddie Chu-hoi Dick accused the Chinese Communist Party of wanting to close the paper, and said Lai’s arrest was “the first step of [a] HK media blackout”.

Claudia Mo, a pro-democracy legislator and a former journalist, said she was more surprised by the raid than the arrest.

“This is just so drastic and blatant,” she said. “They’re sending a clear warning signal to the Hong Kong media, plus any foreign media stationed here, to behave, to watch out,” she told the Guardian.

Jeffrey Wasserstrom, a China academic at the University of California, and author of Hong Kong on the Brink, said the move could be linked to anger over the US sanctions, “but they are also part of ongoing trend, blow after blow against people and institutions in Hong Kong linked to its vibrant civil society.”

He said the current circumstances were potentially more severe than Lai’s previous arrests which occurred prior to the implementation national security law, when there was “still a separation of powers” in Hong Kong.

“There is the risk, under this frightening new normal, that he could be taken to the mainland to be tried,” he said. “Differences between political life and civil society in Hong Kong and mainland cities still remain, but events like these arrests show that what was once a chasm is not quickly, very quickly, becoming a narrow gap.”

The national security laws were imposed by Beijing in late June.

Foreign collusion crimes include requesting or conspiring with a foreign country, institution, organisation or individual – or receiving instruction or funding from them – to disrupt government legislation, undermine an election, or impose sanctions against Hong Kong or mainland China. “Provoking by unlawful means hatred among Hong Kong residents towards the government of Hong Kong or mainland China” is also outlawed.

Lai was also among 25 people charged on Friday over attending a Tiananmen Square massacre vigil on 4 June.

A report in hawkish Chinese state media mouthpiece The Global Times, suggested Lai was unlikely to receive bail and would face “heavy penalties”.

Last week elections scheduled for September were delayed for a year, ostensibly due to the pandemic, and the pro-democracy candidates were disqualified.

Britain’s foreign minister Dominic Raab said in the joint statement from the “five eyes” countries were gravely concerned about the disqualification of candidates in Hong Kong.

It said the security law was “eroding the Hong Kong people’s fundamental rights and liberties”.