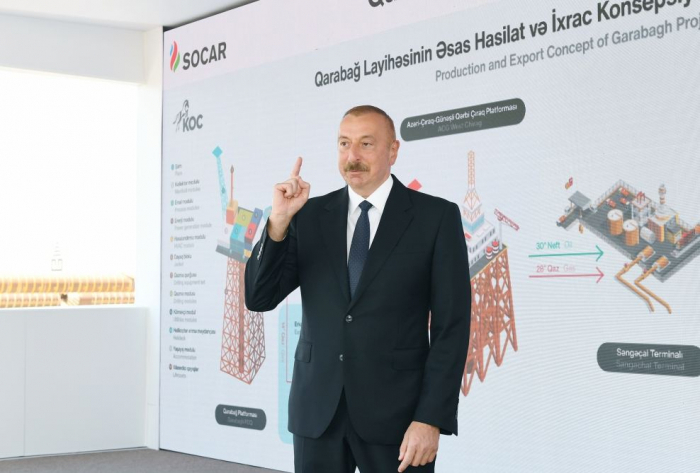 The discovery of the Karabakh field and not continuing works in the field was a gift for independent Azerbaijan, President of Azerbaijan Ilham Aliyev said.

President of Azerbaijan Ilham Aliyev made these remarks in his interview with Azerbaijan Television during a ceremony at Baku Deep Water Jackets Plant named after Heydar Aliyev to send a jacket of Karabakh field offshore, AzVison.az reports.

"This facility has a very complex structure. The facility weighs more than 16,000 tons with height of about 190 meters. Since the area where the Karabakh field is located belongs to the very deep part of the Caspian Sea, it was necessary to construct such a huge facility. I would like to reming that the depth in the Karabakh field is 180 meters, and in my view, therefore oil and gas was not extracted from this field during the Soviet times. During the Soviet time, we did not have such technologies. Deep parts of "Azeri", "Chirag" and "Gunashli" fields have remained untouched. They remained for the period of independence. Otherwise, our offshore fields, as well as onshore ones, would be completely detrained and there would be no energy resources left for the development of independent Azerbaijan.Therefore, the discovery of the Karabakh field and suspension of works on the field was a great gift for independent Azerbaijan. Our policy enable us to do such works. It is a huge and very complex structure in terms of technology and engineering. I am glad that Azerbaijani specialists built such facility. The majority of works has been carried out by Azerbaijani specialists and workers," President Aliyev said.

"It is necessary to note that currently 5,000 people work at Deep Water Jacket Factory.  The average salary of employees is about AZN 1200-1500. It is an enterprise, which requires great professionalism. Therefore, this facility shows our power once again. It is made in Azerbaijan and will serve to Azerbaijani state and people," President Aliyev added.