Brazil great Ronaldinho could be freed on August 24: sources 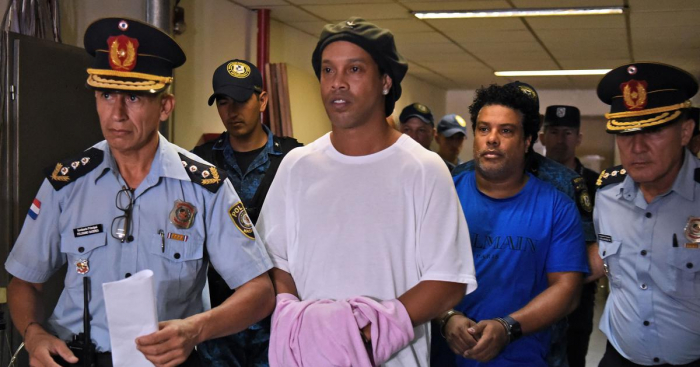 The former Barcelona, AC Milan and Paris Saint-Germain star was detained alongside his brother Roberto de Assis Moreira on March 6, accused of entering Paraguay in possession of false passports.

They spent a month behind bars before paying a $1.6 million bail and being released to house arrest at the plush Palmaroga Hotel in the historic centre of the Paraguayan capital Asuncion.

Judge Gustavo Amarilla has set a date of August 24 to hear the case against the brothers.

Prosecutors have submitted a proposal to the judge that would see Ronaldinho, 40, pay a $90,000 fine "to repair social damage" but be allowed to return home to Brazil where he would have to appear before a judge every three months for a year.

Ronaldinho denies having any knowledge the passports were fake.

His brother -- who allegedly knew about the false passports -- would have to pay a $110,000 fine and appear before a judge every three months for two years.

The brothers arrived in Paraguay on March 4 without any issues, with Ronaldinho, 2005 Ballon d'Or winner, due to take part in event in support of disadvantaged children.

However, shortly after their arrival, the pair were taken into police custody when investigators raided their hotel following the discovery they had fake documents.

The investigation has since expanded into a case of possible money laundering.

Ronaldinho, considered one of the greatest footballers of all time, was crucial in Brazil's 2002 World Cup win.