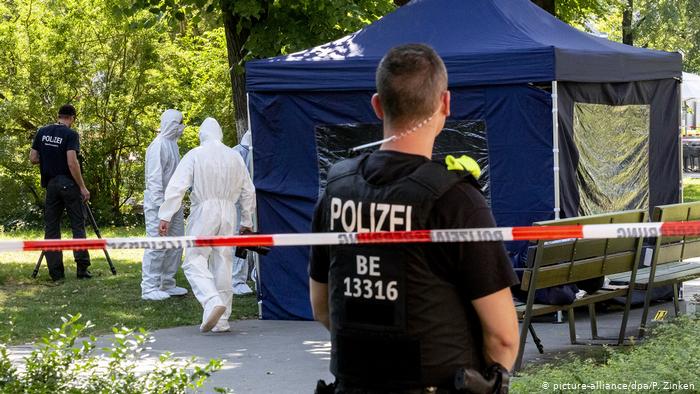 The expulsion could have a possible link to the murder of a Georgian in Berlin's Kleiner Tiergarten park. The foreign ministry said the Slovak consulate in St. Petersburg had issued a visa leading to "serious crime."

Slovakia has expelled three Russian diplomats for a "serious crime," with local media reporting a possible link to the alleged contract murder of a former Chechen rebel in a Berlin park last year.

"I can confirm that a decision has been taken to expel three employees of the embassy of the Russian Federation in Slovakia," Juraj Tomaga, head of the foreign ministry's press department, told AFP news agency. Local media reported that the diplomats had also been involved with espionage.

The Dennik N daily said the Slovak consulate in Saint Petersburg last year issued visas that allowed into the European Union a Russian citizen who was later suspected of killing Zelimkhan Khangoshvili, a Georgian national, in Berlin's Kleiner Tiergarten park.

"According to information from the Slovak intelligence services, their [the diplomats'] activities were in conflict with the Vienna Convention on Diplomatic Relations," said Tomaga. He added that a visa issued by the Slovak consulate in Saint Petersburg had been "misused and a serious crime was committed in the territory of another NATO and EU member state".

On August 23, 2019, a Russian man allegedly gunned down the 40-year-old Chechen with Georgian citizenship with three shots. The suspect was caught the same day, after being seen throwing a wig, a bicycle and a gun into the river Spree. Since then he has been in custody.

"This is certainly an extremely serious matter," said Maas. "The Federal Government expressly reserves the right to take further action in this case."

German police arrested a suspect shortly after the shooting and prosecutors have accused Russia of ordering the murder – a claim which Moscow denies.

The killing caused a diplomatic falling out between Germany and Russia, owing in part to Moscow's unwillingness to aid investigative efforts.

Investigative website Bellingcat earlier named the suspect in the killing of the Chechen as Vadim Krasikov, saying he was a hitman who grew up in Kazakhstan when it was part of the Soviet Union before moving to Siberia.