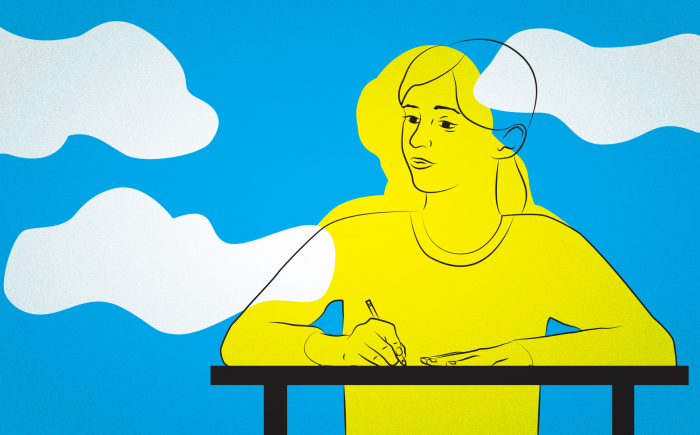 Psychologists have found a single habit that sabotages most goals – and the way to correct it.

How often do you find yourself lost in a fantasy, imagining just how wonderful your life would be if you trained for a marathon, learnt a new language, founded your own start-up or wrote a novel? It’s natural to daydream about the things we want – but contrary to the positive-thinking literature, simply visualising a brighter future won’t make it any more likely to happen.

Instead, psychological research shows that we should start making pragmatic plans to accomplish our goals instead of simply dancing in daydreams. This means comparing  those rosy visions with our current reality, identifying the obstacles and finding the best way to overcome them.

Psychologists call this process “mental contrasting”. Their research shows that most people fail to effectively engage the strategy in their daily lives – meaning that our good intentions remain wishful thinking, and we never reach our dreams. Learning how to mentally contrast effectively can improve our problem solving, motivation and self-control – all of which can bring huge benefits to our personal and professional lives.

Gabriele Oettingen, a professor of psychology at New York University, has pioneered much of the research in this field, which she calls “Fantasy Realisation Theory”. Her interest began with some studies in the 1990s that yielded counter-intuitive results: all revealed that positive thinking on its own could be surprisingly counter-productive. Studying dieters, for instance, she found that the more people fantasised about the weight loss, the less likely they were to actually drop any pounds. Students, meanwhile, who dreamt of academic success tended to get worse grades than those who didn’t.

How could positive thinking backfire so badly? Given these results, Oettingen speculated that participants were non-consciously confusing the daydreams for reality; the warm emotions the fantasies aroused led them to feel as if they’d already met goals, meaning that they were less likely to put in all the hard work needed for actual success.

And so, in the early 2000s, she set about investigating whether a simple reality check could put them back on track. Working with colleagues in Germany, she recruited 55 schoolchildren studying English. Some were asked to write a story about the benefits of being proficient in the language – a “positive fantasy”. (Their answers ranged from “my father is happy” to “I can talk to the Back Street Boys” [sic].) Others were asked to list the obstacles that might stop them achieving that goal – the “negative reality”, such as not knowing enough vocabulary or being tempted to play football rather than doing their homework. And a third group were asked to do both, engaging first in the positive fantasy followed by an acknowledgement of the negative reality. This was the “mental contrasting” intervention.

Sure enough, Oettingen found that the children who’d engaged in mental contrasting made much better progress over the following three months. This was especially true for the students who had the highest initial expectations of success: the simple exercise allowed them to translate those hopes into the best possible grades, while the others obtained middling results.

These early findings inspired a trickle, and then a torrent, of new studies in many different contexts over the following years – and together, they build a compelling case for mental contrasting as a versatile and valuable tool.

We now know the benefits include everything from better academic performance to improved diet, increased exercise and the reduced consumption of alcohol. In 2019, Oettingen found that mental contrasting could also predict success in competitive ballroom dancing, with more commitment to their training in the run-up to a competition. And in a paper published earlier this year, researchers showed that it can also lead to better relationships, by helping individuals overcome their frustrations and reconcile following disagreements.

“[Mental contrasting] is now very well researched,” says Katja Friederichs, a psychologist who studies mental contrasting at the University of Trier, Germany and the Liesenfeld Research Institute in Boston, Massachusetts. “It has been found to be very helpful for people to implement their goals in various areas, from sport to business.”

In each case, the technique seems to steel people’s resolve and determination. “For most wishes, you have to mobilise the effort to overcome an obstacle,” agrees A Timur Sevincer at the University of Hamburg. “And mental contrasting helps people to do that.”

Sevincer’s own research over the past few years has examined whether people spontaneously use mental contrasting in their daily lives. In a typical experiment, he would ask the participant to write about an important personal wish and then analyse their answers for signs of the positive fantasies, followed by the reality check. His results suggest that as few as 10% to 25% of people spontaneously use this powerful strategy in the pursuit of their goals – whereas most people simply indulge in the positive fantasies, or become too bogged down in demotivating rumination about the challenges facing them. That leaves a huge number of people who might benefit from learning to balance the two ways of thinking through mental contrasting.

Mental contrasting seems to be particularly effective when it is combined with “implementation intentions”. Essentially, once you have identified the obstacles that will prevent you from reaching your goal, you should plan concrete ways to overcome the challenge.

That may sound obvious, but once again, it’s a simple step that escapes many people.

In a study published earlier this year, social psychologist Elizabeth Mutter at New York University recently examined the use of this technique for smoking reduction. One participant, for instance, identified that stress often triggered their habit, and they decided that they would instead go on a walk instead of lighting up.

Interestingly, Mutter found that the people with the greatest dependency on their cigarettes were the most likely to benefit from applying mental contrasting with implementation intentions. The discovery chimes with Friederichs’s research, showing that the mental contrasting brings the biggest benefits for people with generally poor self-regulation.

Mutter says that the simplicity of the technique should make it a particularly useful addition to public health programmes. “You can learn mental contrasting with implementation intentions in a short amount of time – around 10 minutes – at no monetary cost.”

If you fancy trying mental contrasting yourself, remember to follow the acronym ‘WOOP’, which reminds you to consider your Wish, imagine the Outcome, identify the Obstacle, and then make a Plan for how you are going to overcome those challenges.

With time, these simple steps should become a kind of mental habit that you apply whenever you find yourself mind wandering into those unproductive fantasies that feel good but ultimately sabotage your success.

Sevincer, for instance, says that he uses it regularly while job hunting. “Before these interviews, I catch myself fantasising how great my presentation or my interview will be, and then I try to take a step back and think of the obstacles.”

Friederichs has similarly integrated the technique into her life. It gives her the self-control to write her scientific papers, for instance, even on a hot summer’s day when all her friends are going for a swim. She compares self-regulation to an “emotional muscle” that you need to develop, and therefore advises that we begin with humbler ambitions before tackling major life goals. She says, “If you start out with small things, you make that muscle bigger, and eventually, even the biggest challenges will be doable.”