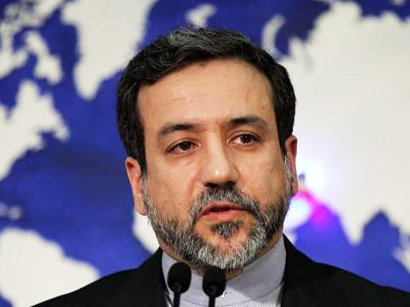 Iran has clearly warned the United Nations Under-Secretary-General for Political Affairs, Jeffrey Feltman that any intervention in Syria would cause hard consequences not only for the country itself, but the whole region as well, Iran`s Foreign Ministry spokesman Abbas Aragchi said at the press conference, IRINN reported live.
Yesterday it was reported that Feltman met Iranian Foreign Minister Mohammad Javad Zarif during his visit to Tehran, and the sides have discussed regional issues including latest developments in Syria.

"Feltman`s visit to Iran has nothing to do with his nationality or diplomatic duties of the past," Aragchi said. "

Feltman`s visit to Iran coincided with the visit of Oman`s Sultan Qaboos bin Said Al Said to Iran. Some media outlets reported that the objective of Sultan`s visit to Tehran is to mediate between Iran and the United States.

"Feltman`s and Sultan Qaboos` visit to Iran is purely coincidental. Feltman`s trip to Iran is connected with regional processes, especially the one in Syria," Araqchi said.

"We hope there wouldn`t be anything else that can complicate the situation even further," Aragchi said.

He went on to note that the intervention on Syria wouldn`t be limited to only inside the country`s borders.

"Iran is using all of its efforts to make the international community and Syrian people to turn to political approach for solving the crisis in the country," Araqchi said.

The United States, Russia and the UN hope the second Geneva conference will implement provisions reached in the first one held last year, which called for a transitional government with full executive power in Damascus.

"We hope that the Geneva conference will allow to find political says of solving the Syrian crisis," Aragchi said, adding that the UN Secretary General and his representative to Syria want Iran to participate at the conference.