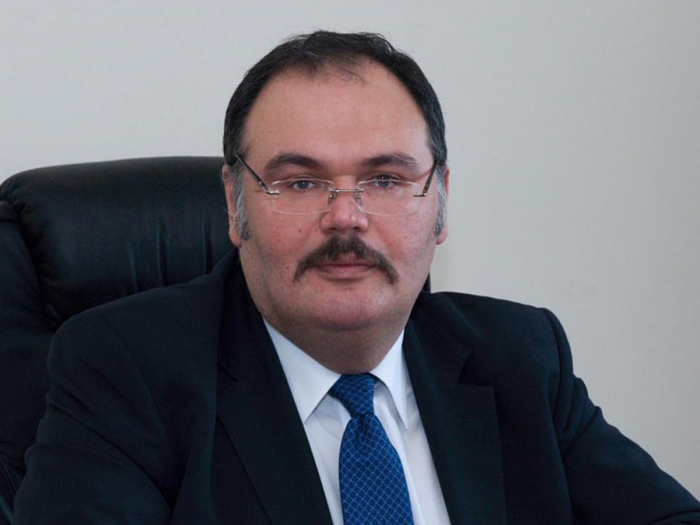 Azerbaijani Ambassador to the UK Tahir Taghizade sent a letter to Baroness Caroline Cox, a member of the UK’s House of Lords, the Azerbaijani embassy told AzVision.az.

Baroness Caroline Cox, the member of the House of Lords of the British Parliament, known for her firm pro-Armenian stance, sent a congratulatory letter to the puppet regime in connection with the 29th anniversary of the illegal regime created in Azerbaijan’s Nagorno-Karabakh region occupied by Armenia. In this regard, Taghizade sent a letter to Baroness Cox.

“It is utterly regrettable that the language of your letter, the one signed by a long-standing member of such a distinguished body as UK House of Lords and somebody who is verbally committed to peace, justice, and morality so closely reminds me of the inflammatory rhetoric used by the Armenian propaganda,” the letter said.

“First of all, realities unlike the fantasies do not have alternatives,” the letter said. “In that sense, “alternative accounts of reality” in your letter are plain impossible. Thus, allow me to draw your attention to something in terms of dry facts while trying to leave aside emotions and delusions alike.”

“I am sure that as a strong fan of Armenia, you have seen BBC’s recent “Hard Talk” featuring Armenia’s Prime Minister Pashinian where he tries to mislead the British audience with a ridiculous “history lesson”, whereas the presenter invites him to address the realities referring to the UN Security Council Resolutions confirming Nagorno Karabakh as an integral part of Azerbaijan and demanding immediate and unconditional withdrawal of all Armenian forces from the occupied territories of the Republic of Azerbaijan,” the letter said.

“While Armenia and most of its supporters resort to false history lessons to validate their cause, Azerbaijan and anybody advocating justice adhere to international law which is quite unequivocal and does not need further justification. Armenia, in contravention of the UN Charter, occupied through use of force, Nagorno-Karabakh and seven adjacent regions of Azerbaijan and conducted notorious ethnic cleansing against a million Azerbaijanis in the seized lands,” the letter said.

“In order to disguise its direct responsibility for military aggression against Azerbaijan, Armenia distorts and misinterprets the principle of the people’s right to self-determination and, attempts to impose the view that this principle may be applied in the form of unilateral secession for the Armenians living in the Nagorno-Karabakh region of Azerbaijan, thus leading to the establishment of the second Armenian state,” the letter said.

“In reality, such a view has nothing in common with the principle of self-determination as set forth in the Charter of the United Nations, Helsinki Final Act of 1975 and other international documents,” the letter said. “Moreover, it is abundantly clear that claims of self-determination are unsustainable when they are accompanied by egregious violations of international law, including its peremptory norms (jus cogens), such as those prohibiting the threat or use of force against the sovereignty and territorial integrity of States.”

“The inhabitants of Nagorno-Karabakh are entitled to the “internal” right of self-determination within the boundaries of Azerbaijan,” the letter said. “It envisages that Azerbaijani and Armenian communities of the Nagorno-Karabakh region of Azerbaijan will live together in peace, dignity, and prosperity without violating the territorial integrity and sovereignty of Azerbaijan. This is what my government has been offering all along the way: the highest degree of self-rule within Azerbaijan. On the other hand, interventions like yours only serve to further delay the resolution of the conflict.”

“Shusha is Azerbaijani city that was occupied by Armenian aggressors on May 8, 1992, after being greatly damaged and completely cleansed of its Azerbaijani population (which comprised 98 percent back in 1989 according to the census data),” the letter said. “The entire cultural heritage of the city was either looted, destroyed or pillaged by the Armenians in flagrant violation of relevant international Conventions.”

“Azerbaijan’s historical links to Shusha can be proven by an endless list of prominent personalities born and raised in that city including Bulbul, a famous tenor; Uzeyir Hajibeyov, composer; Khurshud Banu Natavan, 19th-century Azeri poetess; Molla Panah Vagif, 18th-century poet and many more,” the letter said. “Even a local British-Azerbaijani legislator in the Borough of Westminister was born and has spent his childhood near Shusha. Would you be able to name a single prominent Armenian who was born or at least lived in Shusha?”

“Distortion and denial of historical facts are powerless to change them,” the letter said. “Nakhchivan has always been an integral part of Azerbaijan and no Armenian claims to change that.”

“Your offer of trade of Nagorno Karabakh versus Nakhchivan is unthinkable,” the letter said. “It may sit well only with Armenia which has never had the slightest attachment to any of these territories and thus, would see this as a win-win situation. It will be a logical continuation for a country which evolved along the line of “grab as much as you can” theory. Second, probably influenced by your Armenian friends you are willing to turn everything into an object of trade. But for us Azerbaijanis those territories are part of our ancestral home and can neither be bought nor sold.”

“Historically speaking, during Soviet Russia and even Russian Empire before that, it was a traditional policy to chip away at Azerbaijan’s territories in favor of Armenia,” the letter said. “But, my lady, enough is enough. The fact that Azerbaijan is not pushing for the return of its historical lands that are currently part of Armenia, does not mean that we will give up the rest complacently.”

“Azerbaijan did not violate the Convention you mentioned,” the letter said. “However, I would list a dozen international documents which Armenia violated and continues to do so in the most blatant way including but not limited to: the UN Charter, the UNSC resolutions, four Geneva Conventions, the Helsinki Final Act and many more.”

“This country is so shameless in disrespecting the accepted norms and values of the modern international system that it did not hesitate to erect a monument to a proven Nazi collaborator, certain Garegin Nzhdeh in its capital city,” the letter said.

“When it comes to who is committed to war and peace, I would like to draw your attention to only a few of Prime Minister Pashinian’s consecutive provocative actions after he came to power in 2018:

· May 2018 – Nikol Pashinian sends his son to military service in Nagorno Karabakh which represents yet another example (this time on the level of the Prime Minister’s family) of recruitment of Armenian citizens for military service in Azerbaijani territories.

· August 5, 2019 – Nikol Pashinian visits the occupied Nagorno Karabakh region of Azerbaijan and claims that “Karabakh is Armenia”. Then he leads the crowd in the chants of “Miatsum” (Armenian term for the unification of Karabakh and Armenia).

· May 21, 2020, Pashinian inaugurates the illegally elected “president” of a puppet regime established by Armenia in the occupied territories of Azerbaijan, and to make sure that they add insult to the injury, they celebrate it in Shusha.

· July 12, 2020. Armenia attacks the Tovuz district of Azerbaijan alongside the international border between the two countries. This was yet another violation by Armenia of the norms and principles of international law against the territorial integrity of Azerbaijan. In light of Azerbaijan’s decision to gradually de-militarize the non-occupied part of the border and to put it under the control of the State Border Service, Armenia made an attempt to exploit this goodwill gesture of Azerbaijan to conduct a “surprise attack” on Azerbaijan on the basis of its aggressive military doctrine, which according to Minister of Defense of Armenia envisages “preemptive strikes aiming at creating more favorable security situation” and “new war for new territories”. It was also an unsuccessful attempt to draw CSTO into the conflict as well as provoke Azerbaijan further by endangering energy communications. As a result, Azerbaijan lost more than 10 servicemen, including a general. Also, all the official and media reports including those of the BBC’s, the Independent’s confirm the killing of 76 years old civilian from Azerbaijan as the only civilian killed during recent clashes.

· September 2020 – As the world countries, including Azerbaijan, are trying to alleviate the consequences of the tragedy which happened in Lebanon on August 4, Armenia is exploiting this tragedy and illegally resettling families from Lebanon in the occupied territories of Azerbaijan to alter the demographic situation,” the letter said.

“In the words of Stephen Sackur, in the above mentioned BBC program with these provocative actions and inflammatory rhetoric Armenia’s Prime Minister “is clearly not a peace-maker and his policy does not appear to be designed to achieve peace”,” the letter said. “Instead, this country’s main intention is to dismantle the negotiation process and secure the annexation of Azerbaijan’s occupied territories.”

“Of course, you are entitled to your own sympathies or lack of such when it comes to your foreign political affiliation, but it is at least not fair if you only judge it from point of view of moral justice to force this position on the UK government,” the letter said.

“If after this letter you desire to sit down and discuss the injustices perpetrated by Armenia against my country, I would be more than willing to meet the Honorable Lady,” the letter said. “Last, but not the least, with your kind permission, I am going to repeat the tradition started by yourself and disseminate this letter among media outlets for a publication before becoming aware that it reached its addressee.”