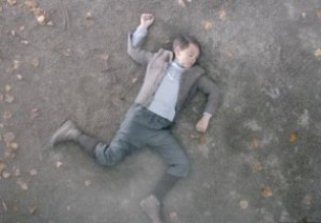 A fake ad in which a young Adolf Hitler is killed by a Mercedes got no love from the auto brand for the spot`s darkly comic revisionism.
The clip, done by German film school students for the First Steps film competitionsponsored in part by Mercedes-Benz, shows a Mercedes C-Class winding through Hitler`s Austrian hometown. The vehicle`s collision-prevention feature helps it avoid hitting two girls in the village, but the car then plows over a young Hitler as his mother screams his name.

For a split-second (watch carefully above) on impact, we see the mass killer the boy would have become; instead, he ends up dead, twisted in the form of a swastika.

"Detects dangers before they come up," the kicker says of the car`s technology.

Mercedes spokesman Tobias Mueller told The Huffington Post that the brand dispatched its lawyers to order the filmmakers to include a disclaimer that notes the ad has no relation to the auto brand whatsoever.

Tobias Haase, who made the viral entry with Jan Mettler, Lydia Lohse and Gun Aydemir, told the Independent: "Mercedes sells its cars on smart technology which prevents accidents. We wanted to pose the question of what might happen if technology had a soul."