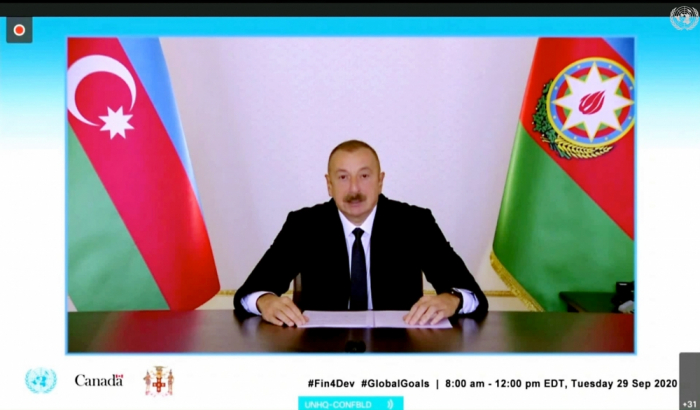 President of the Republic of Azerbaijan Ilham Aliyev has made a speech in a video format at the meeting of Heads of State and Government on “Financing the 2030 Agenda for Sustainable Development in the Era of COVID-19 and Beyond”.

AzVision.az reports that the head of state’s speech was filmed on September 25, 2020.

Azerbaijan attaches great importance to the implementation of the Sustainable Development Goals.

In 2016, we established the National Coordination Council for Sustainable Development, whose primary task is to define national priorities and to align different state programs and strategies with the SDGs.

Having attained the Millennium Development Goals, Azerbaijan achieved a great progress in implementation of SDGs as well.

Azerbaijan has been one of the few states to submit voluntary national reviews to the United Nations twice.

Azerbaijan’s economy has developed rapidly. The GDP tripled in the last 17 years. Poverty in Azerbaijan went down from 49% to 5% within 17 years.

The external public debt of Azerbaijan is one of the lowest in the world and constitutes only about 20 percent of the GDP and Azerbaijan ranks 9th for this indicator globally. Azerbaijan has the lowest external debt among the oil exporting countries.

More than 260 billion USD were invested in the country within 17 years. According to the statistics provided by the International Monetary Fund, currently Azerbaijan’s economy accounts for 70% of the entire economy of the Southern Caucasus region based on the purchasing parity power method.

Azerbaijan places a special emphasis on the equal distribution of energy revenues between current and the future generations. To this end, the State Oil Fund was established in 1999. The assets of the Fund, which was 270 million USD at its commencement, currently exceeds the GDP of the country. Azerbaijan has achieved one of the highest income equality levels.

Due to the difficulties caused by occupation of our territories by Armenia, Azerbaijan was receiving humanitarian aid from international community during the early period of its independence. Later Azerbaijan itself became a donor country. Overall, Azerbaijan provided financial and humanitarian assistance to nearly 120 countries during the last 15 years.

The COVID-19 pandemic has had a negative impact on all the countries of the world. Millions of people are expected to be pushed back into extreme poverty.

Pandemic has affected our economy as well. Despite the decrease in the state revenues during the pandemic period the government has allocated fund around 3% of GDP to the protection of jobs, economic growth and the public health.

In order to counter the negative impact of pandemic the socio-economic stimulus package worth over 2 billion USD has been released to ensure economic stability, tackle unemployment issues, and ensure macroeconomic and fiscal stability. The social relief measures cover nearly 5 million people, which is a half of our population.

Funding for the fight against the pandemic was provided only from domestic sources, without any external financial support. In addition, Azerbaijan has provided humanitarian and financial assistance to more than 30 countries with respect to COVID-19.

In the post-pandemic period, our main priorities are to ensure the economic growth, to maintain economic and financial stability, to further develop healthy and competitive human capital, to create sustainable jobs and to develop new areas of economic activity.

Only through solidarity and joint action humanity can fight against pandemic and overcome its negative consequences. As the chair of the Non-Aligned Movement, Azerbaijan requested to convene the Special Session of the UN General Assembly in response to coronavirus. More than 130 UN Member States supported this initiative. I believe the Special Session will serve as a framework for addressing the pandemic's impact on all spheres and contribute to the global efforts of eliminating its consequences.