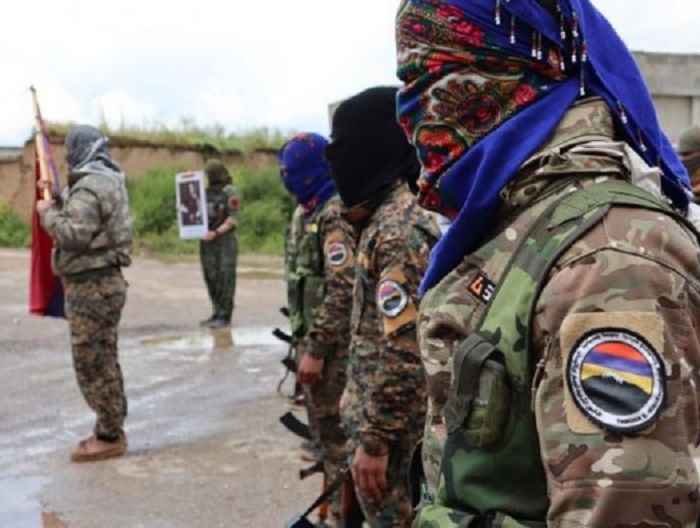 There are numerous facts about Armenia’s involvement of mercenaries from various countries in clashes with Azerbaijan. These facts are highlighted not only by the Azerbaijani media, but also leading foreign media outlets. Thus, Russian, French, British and European media outlets and news agencies regularly publish information about the presence of mercenaries in the ranks of the Armenian army.

Those articles contain the remarks by numerous mercenaries who admit that they came to Karabakh to fight against Azerbaijan. Moreover, mercenaries from the Middle East, especially from Lebanon and Syria, as well as PKK terrorists are fighting against the Azerbaijani Army in Nagorno-Karabakh.

All this testifies to the destruction of the powerful army myth created by Armenia over the past years, as well as to the terrorist and fascist nature of the occupying country. Moreover, in order to cover up its illegal actions running contrary to international conventions, the occupying country keeps spreading disinformation about Azerbaijan’s involvement of foreign mercenaries. However, Armenian reports have not yet been confirmed.

In his interviews with foreign media outlets, the Azerbaijan president has repeatedly demanded evidence of these allegations. But there is no evidence, because the Azerbaijani Army is quite strong and among the world’s 50 strongest armies.

France 24 TV channel highlighted the presence of mercenaries in Karabakh. According to the report prepared by the TV channel, there are numerous mercenaries of Armenian origin, as well as from many countries, including France, in Karabakh. Sipan Mouradian, a-28-year-old French national, said he is going to Armenia to join the battles.

Reuters has also confirmed the presence of mercenaries in the ranks of the Armenian army. The news agency noted that Lebanese of Armenian origin are fighting in the ongoing battles in Karabakh.

The article published by Reuters said that when Lebanon’s financial crisis pushed Vartkes to leave for Armenia this summer, he never imagined he would volunteer to fight in Nagorno-Karabakh. The young Lebanese-Armenian didn’t think twice, however, when the conflict between Azerbaijani and ethnic Armenian forces erupted soon after his move.

“I wanted to go that night,” Vartkes, who asked not to be identified by his last name, said by phone. He has yet to be called to back troops in the region, which is recognized as part of Azerbaijan though governed by ethnic Armenians. I feel like I have to do something for the country,” read the article.

An Armenian defense ministry official has said many from the diaspora applied to volunteer without giving a precise number. Hundreds from as far afield as Argentina and the United States have rushed back to Armenia for combat training, a local instructor says.

The fighting, some of the deadliest in the mountain enclave in more than 25 years, has prompted mass mobilisation across Armenia and seen its vast global diaspora spring into action.

In Lebanon, a community of nearly 140,000 of Armenian origin, one of the world’s largest, has fundraised and sent aid despite a crippling currency crash.

ARP News has also reported the presence of Russian citizens in the ranks of the Armenian army. It is reported that Russian Armenians are paid $1,500 per person.

Moreover, Russian newspaper Kommersant published an interview with Vagan, a 55-year-old Russian citizen who heads mercenaries. Vagan’s involvement in the battles in a third country is contrary to Russian law and is therefore criminally punishable.

The French newspaper Liberation has also covered the presence of mercenaries in Karabakh. The newspaper noted that Gilbert Minasyan, a 64-year-old member of the ASALA terrorist organization living in France, is in Karabakh to fight with the mercenaries he brought with him.

All these facts once again demonstrate to the world that Armenia is a terrorist state.